Now you can make your own chocolate nougat that’s every bit as good as the stuff in your favorite candy bar. Although, we secretly think it’s even better…

Adapted from | Chocolates and Confections at Home | Wiley, 2009

This is a soft chocolate nougat made with a meringue base and dipped in dark chocolate. It’s the fourth musketeer, the one with attitude, the one the others were jealous of, and you make it in your own kitchen! The nougat becomes more tender a day or two after it is made.–Peter P. Greweling

LC Yes, You Can Note

We know what you may be thinking. Yes, you can make your own chocolate nougat. We have faith in you. And in this recipe. You can do it. 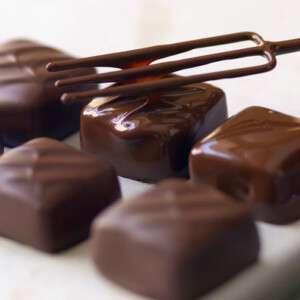 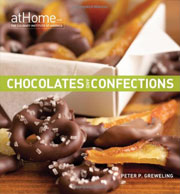 For the chocolate coating

Make the syrup and the meringue

Dipping Master Techniques Set up your work station from left to right with undipped nougat squares, tempered chocolate for dipping, and a pan lined with parchment for the dipped nougat. (Left-handed workers may set the station to flow in the opposite direction.) Rest the bowl of tempered chocolate in a pan or other container so that it can be tilted toward you. Place a square of nougat upside down in the tempered chocolate. Place the tines of a dipping fork on top of the nougat and gently push the nougat into the chocolate to submerge it. With a swift J motion, invert the dipped nougat onto the dipping fork and lift it out of the chocolate. (When lifting the nougat, try to allow one side of the dipped nougat to extend past the end of the fork. This will make it easier to put it down.) Lower the fork so that the bottom of the dipped nougat touches the surface of the tempered chocolate. Do this 6 to 8 times. Glide the bottom of the dipped nougat across the edge of the bowl to remove any excess chocolate. This will prevent a foot from forming when the nougat is put down. Place the dipped nougat on the parchment-lined baking sheet. Making Waves After dipping the nougat, wait for a minute or two until the chocolate begins to set very slightly. Place your dipping fork on the chocolate, flat on the top of the piece. Pick the fork up slowly, pulling a little of the chocolate up with it. As you pick up the fork, move it slightly forward to create a wave pattern in the chocolate. When done at the correct moment, the wave will be smooth and relatively well defined. If applied after the chocolate has set too much, the wave will look more like a scar. A little bit of practice will help you to know the right moment to make the wave. Keys To Success Sugar cooking temperature is always critical. Use an accurate thermometer to cook your sugar. If you want slightly firmer nougat, cook the sugar mixture to a temperature 3° to 4°F higher. For softer nougat, cook the sugar mixture to a temperature 3° to 4°F lower. Make certain that the bowl is free of fat and that the egg whites do not have any yolk in them. Whip the egg whites on the mixer’s highest speed to achieve the best aeration. Stream the hot syrup down the inside edge of the mixing bowl so that it goes into the whites and not on the whip or bowl. Add the hot syrup to the egg whites in a moderate stream, neither very slowly nor in one gush. Do not mix the nougat for a long time after the chocolate has been added. Mix only until incorporated.