For this pecan roll cake with praline mousse, a cream cheese-pecan mousse is spread on a sponge cake and the whole thing is rolled up, jelly roll style, called a roulade, for an impressive dessert.

If this pecan roll cake with praline mousse recipe looks too daunting at first blush, you might consider making it in stages. The syrup for the praline mousse can be made two days in advance, and the cake can be made the day before the dessert is assembled. Or tackle just the cake the first time, and serve it with some strawberry jam and a little whipped cream on the side. Then imagine how good (and beautiful) the cake will be with the mousse on the inside. I prefer to assemble the roulade in the morning and give it all day to get moist and flavorful in the refrigerator. Some sliced ripe strawberries or peaches send it over the top.

For an easy dessert, try the mousse on its own with shortbread cookies and some fresh strawberries. Gelatin tends to thicken on standing for even a few minutes. If the mixture seems too thick and granular when you stir in the rum, you might want to place the bowl over hot water to keep the gelatin liquid.–Susan Spicer 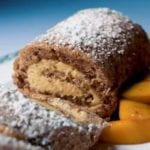 For an easy dessert, try the mousse on its own with shortbread cookies and some fresh strawberries.
Prep 1 hr
Cook 10 mins
Total 1 hr 10 mins
Dessert
Southern
8 to 10 servings
641 kcal
5 from 1 vote
Print Recipe 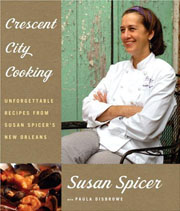 For the praline syrup

For the praline mousse

This is a great dessert. I served it at a dinner party this past weekend, and everyone loved it. I garnished it with fresh strawberries and blackberries. It wasn’t that difficult for me to make, although it is a bit time consuming. I wouldn’t recommend this recipe to novice bakers since there is quite a bit of advanced technique involved.

I used two recipe approved substitutions. I used low-fat cream cheese and dark rum because I had those on hand didn’t want to go to the grocery store. The result was great and its gluten free, a bonus for several people in my office. I took this to a late holiday party and it was very popular. The texture improves the longer you let it sit and although there are many steps none are terribly difficult. This is a special occasion cake, worthy of special occasions.