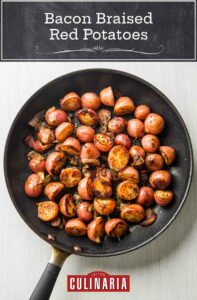 Bacon braised red potatoes from America’s Test Kitchen are a new take on a classic dish. By simmering everything in water first, the potatoes are imbued with the flavors of bacon and onion a little more deeply. Then everything gets crisped up before serving. Perfection.

Here we added bacon and a sliced onion to the mix and simmered them with our halved red potatoes in water until the potatoes were just tender. The water performed two functions: It seasoned the potatoes while cooking them through and rendered the bacon fat. We then removed the lid and boosted the heat to first evaporate the liquid and then lightly brown the potatoes and onion and crisp the bacon.–America’s Test Kitchen

WHY IS BRAISING SUCH AN EFFECTIVE COOKING METHOD?

Most often used for tougher cuts of meat or very dense root vegetables, braising is a very effective way to deeply flavor foods while adding tenderness. Essentially, you’re simmering something in water (or broth) that’s had aromatics and spices added, and letting it slowly cook down until it’s ready to eat. It’s an economical way to add tons of flavor to a dish and makes the most of ingredients that might otherwise be inedible. Most often, meat is browned before being braised but this dish browns at the end, giving the tender ingredients a chance to get crispy before being served. 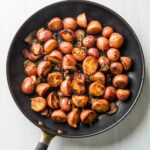 Braising red potatoes on the stovetop produces a dead-simple side dish full of flavor. Finishing the dish with some fresh thyme gives it a bright herbal boost. For the best results, use potatoes that measure about 1 1/2 inches in diameter. You'll need a 12-inch nonstick skillet with a tight-fitting lid for this recipe.
Prep 10 mins
Cook 40 mins
Total 50 mins
Sides
American
4 servings
139 kcal
4.50 / 2 votes
Print Recipe 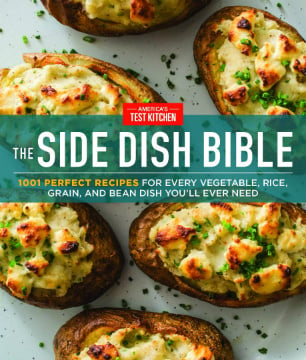 This recipe for bacon-braised red potatoes is a great side dish that is mostly hands-off. The bacon and onion flavor is all through the potatoes. We love German-style fried potatoes and this recipe ensures that the potatoes are nice and tender inside. Once the water evaporated and they began to sizzle, I started to stir so that the onions caramelized as well. 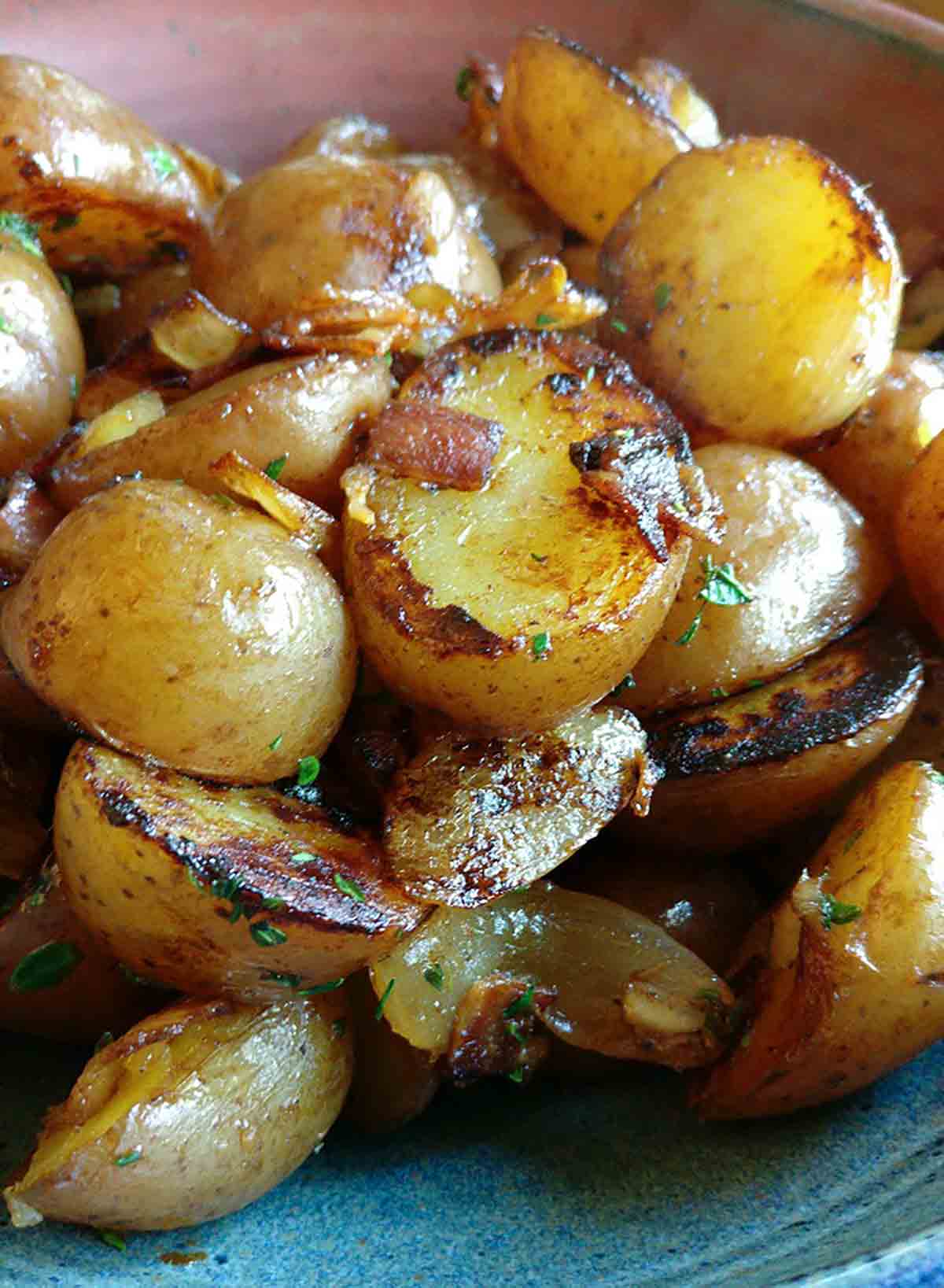 Next time I’ll only add enough water to cover so that it doesn’t take as long to evaporate. Rosemary or parsley would work as well. The leftovers are wonderful fried up the next morning. Served with a spicy grilled chicken, this is a keeper.

This recipe for bacon-braised red potatoes is on this tester’s choice “yes, yes, yes!” list. These potatoes were creamy on the inside, crispy on the outside, and total herb-y bacon-y deliciousness. Even the salt was just spot on even though I doubted that 1/4 teaspoon would be enough. 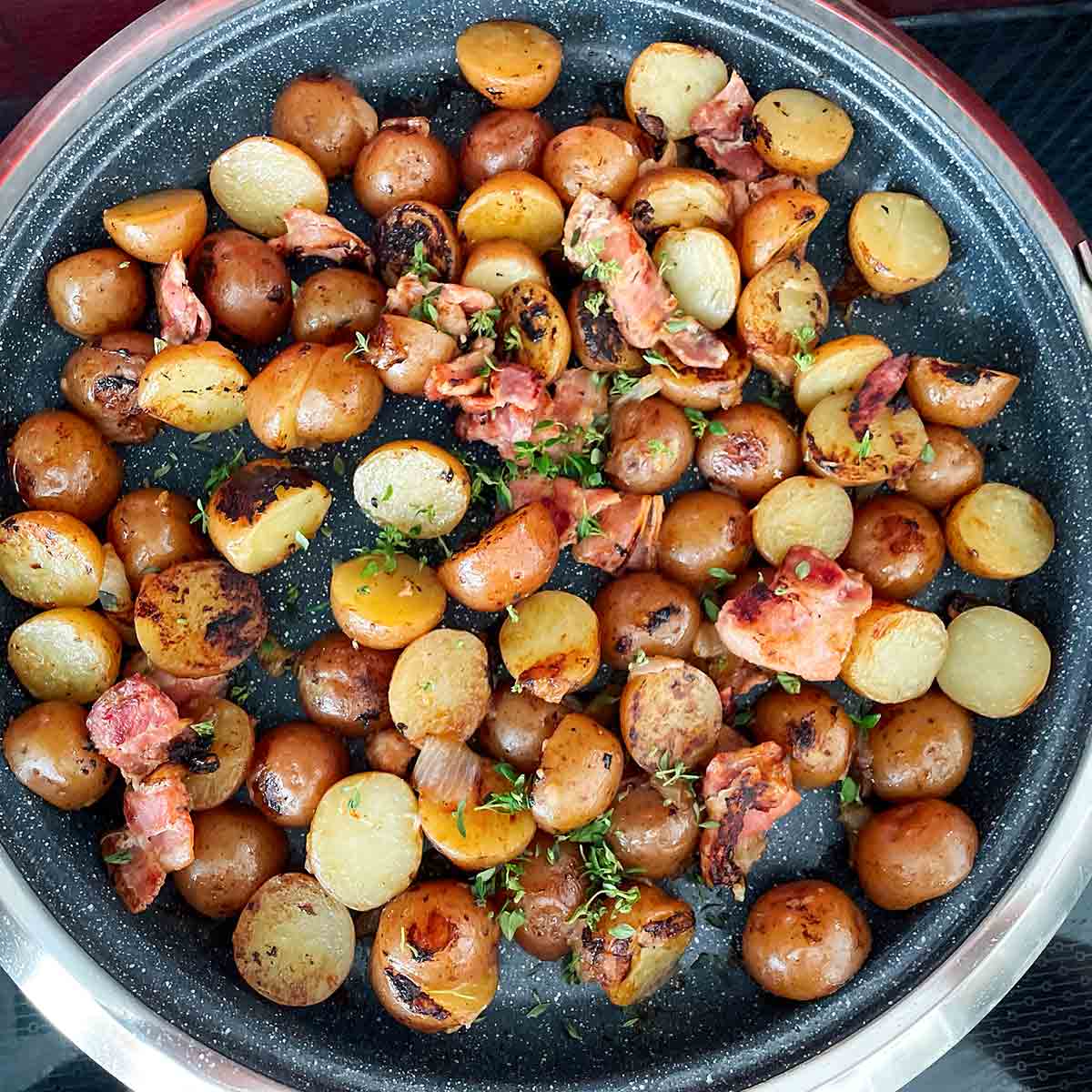 My only recommendation is that the pan not be too shallow. The 12-inch diameter pan was perfect for accommodating the potatoes in one layer. My only 12-inch pan with a tight-fitting lid was a bit shallow creating a bit of spillage and a lot of mess. This can definitely be avoided with a 2-to-3-inch pan depth. Trust me, these were worth even the messy clean-up.

Three of us devoured half these potatoes with roasted chicken and slaw. The leftovers warmed up so well in a pan the following day. Those were enjoyed as home fries with eggs and tomato slices. What versatile little spuds these are!