These lemon bars have a buttery cookie crust, a silken filling, and a dusting of confectioners’ sugar for an old-fashioned and familiar contrast of tastes and textures. 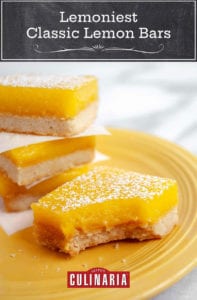 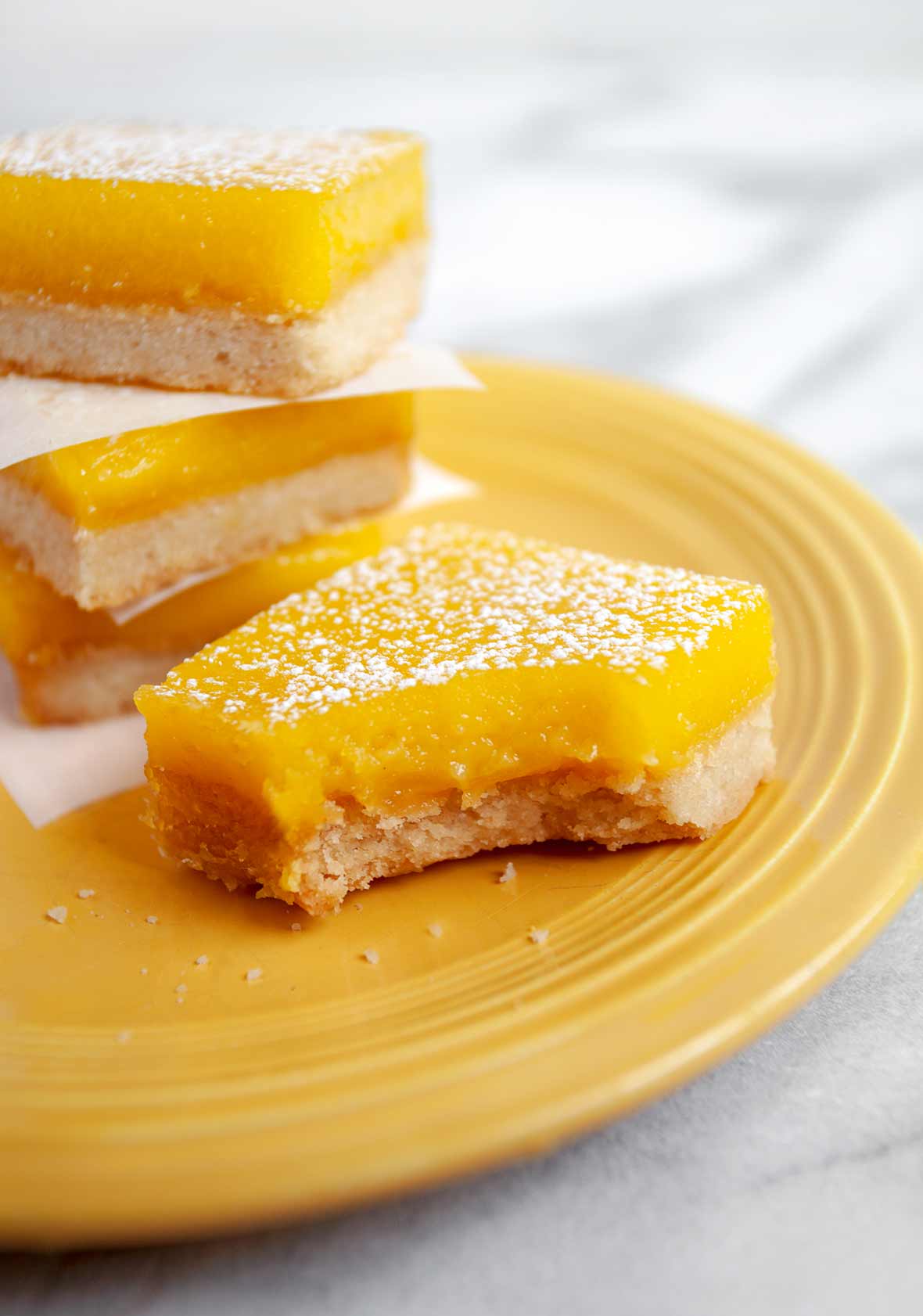 Each of us has a childhood recollection of lemon bars like these. Except we’re gonna hazard a guess that these bars are better than the ones of your childhood. A tender cookie crust that’s not unlike shortbread. A silken and tartly sweet filling that’s just puckery enough to make your eyes begin to twitch. That characteristic dusting of confectioners sugar as a final flourish. And just a smidgen smoother and more refined around the edges than the ones you remember. (But you don’t have to tell mom that.)–Renee Schettler 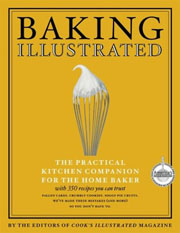 Make the cookie crust
Spray a 9-inch (23-cm) square baking dish with nonstick cooking spray or generously butter it. Fold two 16-inch (40-cm) pieces of parchment paper or aluminum foil lengthwise to measure 9 inches wide. Fit 1 sheet in the bottom of the buttered dish, pushing it into the corners and up the sides of the dish (the overhang will help in removing the baked bars). Fit the second sheet of foil in the dish in the same manner, perpendicular to the first sheet. Spray the sheets with nonstick cooking spray or generously butter them.
In a small bowl, briefly process the flour, confectioners sugar, and salt to combine. Add the butter and process until blended, 8 to 10 seconds. Then process until the mixture is pale yellow and resembles coarse meal, about three 1-second pulses.
Sprinkle the mixture into the prepared dish and press it firmly with your fingers into an even layer over the entire bottom of the baking dish. Refrigerate for 30 minutes.
Preheat the oven to 350°F (175°C) and adjust an oven rack to the middle position. Bake the crust until golden brown, about 20 minutes. Place the pan on a wire rack while you make the lemon filling. Do not let the crust cool to room temperature.
Make the lemon filling
In a medium nonreactive bowl, whisk together the yolks and whole eggs until thoroughly combined but not frothy, 5 to 10 seconds. Add the granulated sugar and whisk until just combined, about 5 to 10 seconds. Add the lemon juice, zest, and salt and whisk until combined, 5 to 10 seconds.
Transfer the mixture to a medium nonreactive saucepan over medium-low heat, add the butter, and cook, stirring or whisking constantly, until the curd thickens considerably, 5 to 10 minutes.
Immediately pour the lemon mixture through a fine strainer set over a clean nonreactive bowl, pressing with the back of a spoon or spatula. Pour the heavy cream into the curd and stir until no streaks remain.
Assemble the lemon bars
Immediately pour the lemon filling onto the still warm cookie crust and bake until the filling is shiny and opaque and the filling in the center portion of the baking dish jiggles slightly when you shake the edge of the baking dish, 10 to 15 minutes.
Let the bars cool in the baking dish on a wire rack until room temperature, about 45 minutes. Remove the bars from the dish using the parchment or foil as handles and transfer everything to a cutting board. Cut the lemon bars into 2 1/2 inch squares, wiping the knife clean between cuts as necessary. Just before serving, dust some confectioners’ sugar over the bars. Originally published April 23, 2004.
Print Recipe

Perfect lemon bars! The filling is tart and bright; the shortbread crust melts in your mouth. They received a thumbs up from my lemon bar-loving tween!

The bars are delicious. I used a probe thermometer. After 10 minutes, the curd still had not reached 170°F and was very thick so I took it off the heat and strained it.

I loved how the foil made it so easy to lift out of the pan. I cut 16 bars, each just over 2 inches, which is slightly smaller than written in recipe.

Excellent. The filling is simultaneously tart, sweet, and just a slight hint of bitter, and the crust was crumbly and sweet with a touch of salt. Fabulous.

I didn't expect the crust to work the way it did—it didn't seem like there would be enough moisture to hold it all together but it worked like a dream! A really great (easy!) method for a lovely short crumbly crust.

I used whole milk instead of heavy cream (i could have sworn I had heavy cream on hand!). I baked the bars for 16 minutes. At that point the edges were set and there was a slight jiggle in the center when I tapped the side of the pan. I didn't dust with powdered sugar.

At room temperature I found the texture contrast between the crust and filling to be too dramatic. I really loved it once it had been refrigerated overnight and the filling was just slightly more set but the crust had maintained its crisp texture. For the record, my husband and family didn't agree. They thought it was excellent chilled and at room temperature.

The lemon flavor was wonderful and the sweet cookie-like crust was a perfect texture and complement to the more sour, softer lemon curd. And the two perpendicular foil layers in the pan worked very well to allow for easy extraction from the pan.

I think it is better to leave the squares at room temperature for longer than 45 minutes before cutting. After cooling the bars for 45 minutes, I lifted the large square from the baking dish and began to cut it. It was slightly warmer than room temperature, so the lemon curd wasn't quite set. These ones didn't quite look like the photograph. We tried some of them and then waited to cut the rest for another 3 hours. These cut nicely as were more firmly set, and looked closer to the photograph. I also put a few in the fridge, but the best ones were the ones left to sit longer at room temperature.

As one can never have enough lemon bars (I think it’s safe to say they are universally adored), I tested this recipe twice. The tartness of the lemon and sugar are very well balanced and the buttery crust was tender and not overly rich. Lovely lovely treats.

I strongly recommend Method #2. I think the warm crust—mine was quite hot, having been out of the oven for under 2 minutes—provided a large heated surface that cooked the filling very evenly from the bottom. When baked, the surface of the filling had a uniformed appearance with a delicate white foamy layer on top, which served as a barrier to keep the confectioner’s sugar from being absorbed into the bars. And the texture was the lemon filling was equally gooey in the middle and near the edges. (With Method #1, the “white foamy layer” formed only around the edges like a picture frame. The filling was definitely wetter in the middle, and the confectioner’s sugar disappeared into it.)

So get started on the filling as soon as you put the crust in the oven and have it at the ready. One caution with the recommended Method #2: since the filling cooks faster (no worries, no curdling of the eggs), start checking the bars at 18 minutes, or reduce the oven temperature to 325°F.

For the lemon juice, I would juice 3 lemons and measure. (Two yielded just enough the first time, but not quite the second time...)

Lemon bars are one of my favorite desserts, but I usually crave more lemon curd. This recipe totally took care of that! It has such a great lemon curd-to-crust ratio, and the crust is so buttery and delicious. The addition of powdered sugar really makes it like an amazing cookie rather than your usual crust.

While really delicious, I think I craved a little more pucker factor.

Back to Lemon Bars on Leite's Culinaria