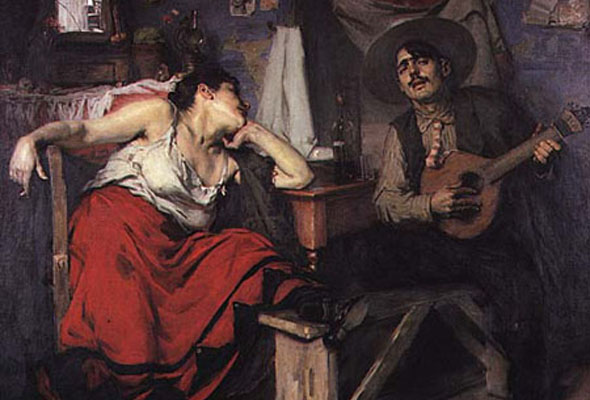 The Portuguese have as many fado ballads, their famously gut wrenching street songs about broken love, as they do recipes for salt cod. Maybe more. On the surface it might appear that Portugal is a nation of perpetual melancholics, obsessed with the idea of unrequited desire and dried fish, but over time I’ve come to discover that even the indefinable word saudades—a combination of nostalgia and yearning that is the root of fado culture—has two meanings. For in its fatalistic view of loss, there is an ever-present glimmer of hope.

At times, my own life has echoed with strains of saudade. When the death of the poetry press I worked for forced me onto the unemployment line, I thought, Well, I just lost my perfect job, now what do I do? Eventually, I chose my own bliss—the world of food and wine.

I fell hard, passionately,em>fado-like for viniferous vocabulary and managed to land the coveted position of wine manager of one of the preeminent Iberian stores in this country. And while my new vocation proved daunting at first, I figured if Julia Child was recruited as a spy, surely I could handle the rows of foreign wines, the dust-laden racks of ports and Madeiras that were now entrusted to my budding palate. I challenged myself to become the saint of paella perfection, the demystifier of fortified wines, and devoted myself wholeheartedly to tasting, note-taking, and consulting every wine atlas available to absorb the vineyard topographies of Portugal and Spain, where I hoped to someday visit.

The last thing I expected in the midst of my newfound joy is that I would get dumped.

In a matter of a few weeks, my aspiring author boyfriend deserted me for a hermitic life to perfect his novel, my dear grandfather died, and I was thrown to the pavement as two punk kids grabbed my hand bag, just steps away from my apartment. The great fado singers Amalia Rodrigues, Mariza, and Misia became my new best girlfriends, sharing their heartaches and woe with me:

A cup, plus a cup
Already an ashtray full of cigarette tips
An old frame
Remembering your image and the pain I grab
A cup, plus a cup
A song of love and endless smoke
That is all I have left, is all that was
Of you…of us…of me

And while the bottles I brought home to sample soothed the pain of my wounds, I sent out a nightly request to the cosmos that life might get better from here.

Then it happened, just as suddenly as the rest of it…Senhor Direito, my Mr. Right and a chef at that, walked in the door as I was wrapping up a Saturday tasting. I wandered over to the Portuguese wine section, where he was gazing among the bottles, and took a deep breath. “Can I help you find something?” I asked, with as much confidence that I could muster. With a shy grin on his face, Senhor D. replied, “I don’t know much about Portuguese wines. What would you recommend?”

I looked endlessly in that moment at the countless labels and shelves of our Portuguese section and took a deep breath. “Well, this Chamine is fantastic. It’s full of rich blueberries, it’s fresh, silky, and a total bargain. The couple who make it sailed around the world to find their perfect match for a winery location and decided on the province of Alentejo to make the wine they dreamed of…”

A year later, I was flying over the curvaceous terracotta rooftops of Lisbon with my new love, waiting to land on my feet.

“My grandfather drinks a liter of wine everyday, some days a little more, and lived into his 90’s!” shouted Francisco, as he led us briskly through the blue-tiled kitchen of our designated lunch spot, Restaurante Churrascaria, in central Portugal, pointing and choosing from a cooler piled with slabs of raw fish and a full entourage of meat grilled to order.

“Wine also erases the effects of smoking,” our official tour guide from Caves Dom Teodosio informed us, every so often coughing through the thick haze in the dining room. By the end of our educational lunch Senhor D. and I learned that house music, chain-smoking, and driving 130 mph were some of Francisco’s favorite things. “The Portuguese are terrible drivers,” Francisco conceded, as we took off for our first wine tasting in the central province of Ribatejo, and I tried to concentrate on the spectacular show of roadside fruit stands piled with melon pyramids whizzing by at increasing speed. Oh well, I thought as I yawned, digesting the long flight and complex carbohydrates. At least we’ll die with a belly full of Portuguese meat, fried potatoes, and a basket of cornbread.

Our entire trip was made up of these kind of memorable, genuinely open moments, in which the Portuguese went out of their way to share favorite regional dishes or stories of how their families struggled with economic hardships and rebuilt their wineries. Or, as at Vinhos Alvarinho de Monçao in the lush countryside of the Minho at the very northern tip of Portugal, a granddaughter and grandfather led us out into to the vineyards close to midnight to see how magnificent their grapes looked under the light of the moon.

But on our journey, if one man embodied the serene rusticity of his surroundings it was Alvaro Martinho-de-Lopez, the exceedingly passionate vineyard manager at Real Companhia Velha, one of the oldest and largest producers of port, who told us he kept to a regimen of three to four hours of sleep a night so he could be closer to his vines during the harvest.

Alvaro greeted us at the labyrinthian warehouse of barrels wines in Vila Nova de Gaia, across the mighty Douro River from the city of Oporto, where the company’s tawny ports are aged, then headed us to the laboratory where Alvaro wanted Senhor D. and me to taste a fresh cask sample of 1900 Royal Oporto he had ostensibly pulled that morning in honor of our visit. “It’s so…alive,” I stammered after my first sip. “The perfume—it’s like a glass filled with sea salt and almonds.”

A few days later we met again, this time in Alvaro’s beloved home, the majestic Douro Valley, whose mountains reminded me of an endless stretch of rounded beehives, each stripped of nearly anything but steeply terraced grapevines. After an exhausting afternoon of trying to keep up with Alvaro in the vineyards, we returned to the company’s family lodge on the banks of the Douro, dusty, dirty, and hot, and gladly accepted a glass of chilled Evel Branco, a refreshing white wine made from some of the same varietals used in white port, which instantly filled our mouths with soft apricots and melons, much like we’d seen days before in Ribatejo. The house cook began filling the table with chourico, black olives, local cheeses, fresh tomatoes shimmering in virgin olive oil, and, like at many of the wineries we visited, a simple bowl of potato chips. And why they tasted better there, I can’t really say. But Alvaro, Senhor D., and I sat together, as if old friends, listening to the lulling sound of grapes being crushed and sorted at another quinta across the river. “It is a nice life here,” said Alvaro quietly, and we couldn’t have agreed more.

So now on any given morning, I’ve been known to jump up from the kitchen table, kiss my husband (yes, Senhor D. and I got engaged on our last night in Lisbon), and head to the upper garden plot to see if any bumpy leaves of dinosaur kale survived our Northwest winter, grabbing a pitchfork along the way to unearth some potatoes in preparation for a supper pot of steaming caldo verde, the consummate soothing Portuguese soup. Likewise, I’m apt to later disappear down into our humble cellar, which is stocked year-round with vinho verde, the quintessential, slightly effervescent Portuguese white wine from up in the Minho that’s made with up to half a dozen unpronounceable varietals, all the while a soaring fado ballad wails away in our happy kitchen.

——
Armed with an MFA in poetry from Naropa University, and six years of tasting more Tempranillo than should be legally allowed in the state of Washington as wine manager at Seattle’s Spanish Table, CATHERINE REYNOLDS officially launched her own company, Queso y Vino, in November 2008. But not before she was named one of Seattle’s “Top Five Up and Coming Sommeliers” by Wine & Spirits Magazine.

© 2009 Catherine Reynolds. All rights reserved. All materials used with permission.