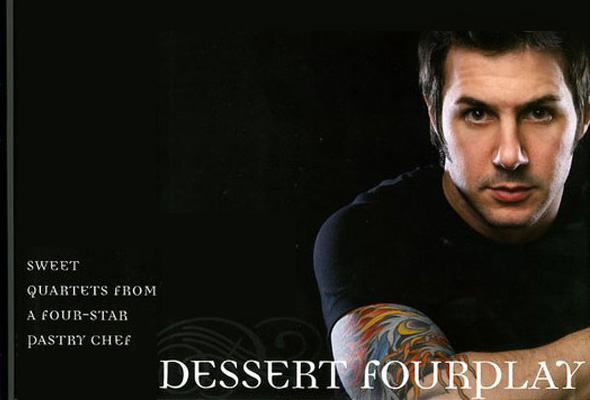 Last night The One and I braved Arctic winds to go to the book party for the bad boy of the pastry world Johnny Iuzzini. His tome, Dessert FourPlay: Sweet Quartets from a Four-Star Pastry Chef, which hit bookstores at the end of December, was co-authored by the lionized writer and former book editor, Roy Finamore, and all three were being seriously feted.

You have to understand something about me: when it comes to chic-beautiful-people parties, you’ll usually find me in the corner, hugging myself as I rock back and forth with a glazed look in my eyes. Blame it on flashbacks of high school prom, unsuccessful therapy, or poor socialization skills, but these kind of parties aren’t my thing. I like intimate. I like quiet. I like to be in control. So the moment we turned the corner onto King St. and looked at the crowd jammed into Jacques Torres’ Chocolate Factory, where the party was held, for a millisecond I considered bolting and being a no-show. But we pressed on, and when we opened the door, Johnny himself was there in his all tattooed glory. I gave my name to the kid with the clipboard, and instantly Johnny gave me a big handshake and a dude-ly clap on the back. Now, whether he knew who I was—highly doubtful—or whether he’s just a good-time guy who’d give a stranger a cold beer–more than likely–it was still nice to be welcomed so warmly into a room where I immediately raised the average age by 10 years.

If you’ve never been to the Factory, the store is a giant oval with rooms off the perimeter, where, on a regular day, customers can watch all sorts of deadly delicious creations from Jacques being made. (Hint: go on Thursday when the croissants are coming out of the oven and are impossible resist. I ate three in one sitting a while back.) Today, though, was pure Johnny and Roy. All around us were employees from Jean Georges, Johnny’s stomping ground, and students from the French Culinary Institute serving up treats from Johnny’s book as fast as the crowd could eat them. 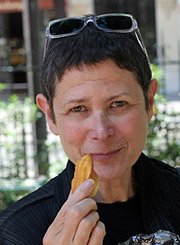 Before I made my way through the food rooms, I decided to buck up and say hi to some people I knew. (I figured if I could get a social anchor, the impulse to hide behind the counters would be mitigated; after all, medication can only do so much.) The first person to spot me was my blog buddy and everyone’s favorite baker, Dorie Greenspan, who, by the way, will be seen in the pages of this blog next month. She was chatting with, of all people, my book editor, Rica Allannic, and her husband, Cyrille, formerly of Restaurant Daniel. Nearby was my agent, David Black, and just behind him, co-author Roy Finamore, looking like an enormously self-satisfied cat perusing the room and accepting congratulations with a glad hand. 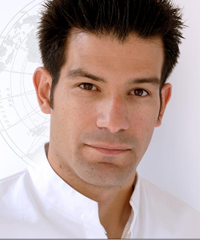 The biggest surprise–well, second biggest surprise right behind Johnny actually acting as if he knew me—was bumping into George Mendes. George is Portuguese-American, like me. (His family is from Viseu, in the historical region of Beira Alta.) He’s opening a new restaurant on W. 17th St. in New York City called Aldea. It’s Iberian in concept, with plenty of Portuguese influences on the menu. So, naturally, we spent a lot of time comparing notes on dishes and talking about the evolution of Portuguese food while I was making it very clear I wanted a front-row seat on opening night.

As The One and I made our way to the food rooms, and marveled at the phantasmagorical arms, necks, and hands all around us, I was convinced we were the only ones without tattoos, which I happened to express while waiting in line for a bite. The couple in front of me assured me I wasn’t; they, too, had bodies that were entirely artless—in the tatted sense, that is. But I wasn’t buying it. They were too downtown-looking, too hipsterian not to have a tiny flower, or Tasmanian devil, or the words “Paradise Awaits Here” forever emblazoned on some unseen soft folds of their flesh.

Now on to the food: It was, as I’ve experienced it at Jean Georges, marvelous. How could it not be? Half the pastry staff was there. By the end of the evening I was on a high of sugar, chocolate, fruit, texture, and inventions. We made the grand tour with my friend Anne McBride and her husband, Ronnie. A few standouts: a bite-size caramel ice-cream lollipop with caramel brittle all encased in deep, rich dark chocolate that was so good we each took two. Hot chocolate chipotle soup with coconut foam and tiny chocolate brioche croutons hit the spot on a cold night. The One made a beeline to the trio of chocolate sweets: a chocolate-peanut cake with bitter chocolate sorbet and peanut caramel. A simple (well, simple for Johnny) citrus salad with calamanzi noodles was a good palate cleanser. My favorite, though? A chestnut-hazelnut tart with chestnut sauce. The meaty-nutty flavors, hints of cinnamon, and the smooth creme fraiche filling slathered in a lovely milk-based brisee crust did it for me.

Okay, now the ugly, entirely unseemly truth. After I said my goodbyes, strutting a bit because I actually got face time with more than the bored, fantastically pierced coat-check guy, and with (free) amazing flavors still lolling around my palate, I came home and destroyed it all by digging into a bowl of protein-laden tuna salad. A truly bleak ending to a sublime evening, I know, but I was starving.

Today, the memory of Johnny’s tart is still lingering—so much so I’m considering getting a tattoo of it on some soft folds of my own flesh. After all, that’s probably where it’ll end up anyway. 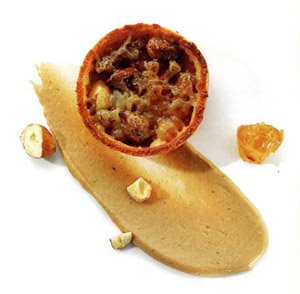 The origin of this dessert is Tarte Vaudoise, a traditional European pastry. I’ve replaced the original heavy cream with creme fraiche and added different nut textures. It may look simple on the plate, but it’s complex in flavor.

Directions
Make the tart dough
1. Put the flour, sugar, salt, and baking powder in a food processor and pulse to combine. Add the butter to the processor. Pulse until the mixture is crumbly. Add 1/4 cup milk and pulse again, until the dough starts to come together.

2. Turn the dough out into a bowl and gather it into a ball. If the dough is still a bit dry, add a little more milk, tossing the dough with your fingers. You may not need all the milk.

3. Shape the dough into a brick, wrap in plastic, and refrigerate for at least 1 hour before using.

Make the chestnut sauce
1. Put the milk, chestnut puree, creme fraiche, and salt in a blender. Blend until very smooth.

2. Scrape into a bowl, cover with plastic wrap, and refrigerate until you’re ready to serve the dessert or for up to 2 days.

Make the tarts
1. Divide the dough in half and roll each piece out into a rectangle about 9 by 14 inches and 1/16 inch thick. Place the dough on parchment-lined baking sheets and refrigerate for 30 minutes.

2. Cut the dough into 3 1/2-inch circles and line twelve 2 1/4-inch tart rings with the dough. Set on a Silpat- or parchment-lined baking sheet and refrigerate for at least 30 minutes.

4. Whisk the creme fraiche, sugar, and flour together.

5. Trim the excess pastry and prick the shells-bottom and sides-with a fork. Put some chopped marrons glacés and hazelnuts in each shell and spoon in the crème fraîche mixture, filling the shells no more than one-quarter full. Dust lightly with cinnamon.

6. Bake the tarts until the shells are golden brown and the filling is translucent, about 14 minutes. Rotate the baking sheet halfway through baking. The filling will bubble up and probably overflow and then subside as you bake the tarts.

7. Let cool for a few minutes, then remove the tart rings. Slide the tarts back into the oven for 1 to 2 minutes, to crisp the outside of the pastry.

8. Spoon some chestnut sauce on each plate. Top with a tart and garnish with hazelnuts and marrons glaces.

Notes
You will need 1/2 recipe of tart dough for this recipe. This dough will keep for about 3 days in the refrigerator and for several months in the freezer. Defrost before rolling.

Clement Faugier chestnut puree is available at specialty and gourmet markets and online from Amazon.