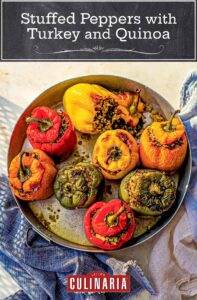 Berbere spice blend gives the turkey and quinoa filling a complex depth of flavor, and the chili powder gives it an extra kick. This version has officially replaced the more traditional Greek one in our household. Serve these with a simple green salad. Be sure to choose peppers that have a flat enough bottom that they can stand upright in the baking dish.–Nicholas, Chloe, and Olivia Tsakiris

How much of this dish can I make in advance?

The beauty of this recipe, besides the spectacular taste, is that you can make them in advance by up to 2 days. Prepare them and cover with foil, then refrigerate until you are ready to bake. You can refrigerate the prepped peppers for up to 2 days and cook when ready. If you make them right before you’re going to serve them, you can keep the leftover stuffed peppers in the refrigerator for up to 3 days. Reheat in the microwave or oven before serving.

What is berbere spice?

A building block of Ethiopian cooking, it’s a spice blend composed of chiles, garlic, fenugreek, and a handful of warm spices, such as allspice, cinnamon, or ginger. Meaning “hot” in Amharic and pronounced bari baray, it can be made with varying levels of spice, so if you’re spice averse you might want to search out a mix with less chile.

Do you have any tips for cooking quinoa?

For extra flavor, cook your quinoa in chicken stock. If using salted chicken broth, don’t add extra salt to the quinoa. If you find that your quinoa is cooked before all the water is gone, feel free to drain it. Quinoa doesn’t always absorb all of the water it’s cooked, unlike rice, and can easily be passed through a fine-mesh strainer.

Stuffed Peppers with Turkey and Quinoa 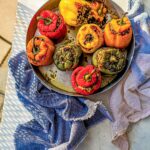 Peppers aren't native to Greece; they arrived from the New World in the late fifteenth century, and now they are ubiquitous in Mediterranean cuisine. Our gemista (Greek rice-stuffed peppers) nods to the pepper’s origin by substituting quinoa for rice and using turkey instead of beef, giving a uniquely American twist to the traditional stuffed pepper.
Prep 30 mins
Cook 1 hr 30 mins
Total 2 hrs
Mains
Mediterranean
8 peppers
277 kcal
5 from 1 vote
Print Recipe 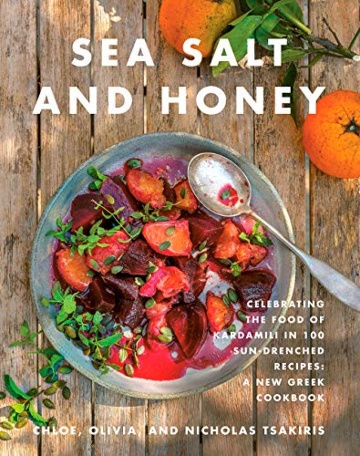 This recipe for stuffed peppers with turkey and quinoa has a winning combination: tons of flavor, healthy ingredients, and easy to make (though it takes a little time).

Ground turkey is a good choice for these peppers because it takes on the flavors really nicely. And the berbere is really something! You get the spice from the chiles, savoriness from the seeds and cardamom, and a little sweetness from the cinnamon.

So, I do love this dish. Visually, it’s a neat package of everything a meal should have and the flavor is wonderful. I just felt the seasoning needed to be tweaked a little to be balanced.

I had way too much filling for the peppers, I could have filled at least another 4 peppers but I do wonder if my peppers were just a touch too small. Maybe larger ones would have received all of the filling, and taken the full 75 minutes to cook.

I served the peppers with some high-quality French cream cheese, and it was fantastic! In terms of pairing with other foods, these peppers don’t need much–they’re really a complete meal all in one convenient (if time-consuming) package! It’s a great prep-ahead meal and convenient for leftover lunches too.