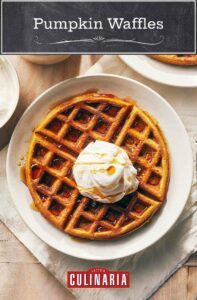 Pumpkin waffles with maple whipped cream take the PSL flavors of fall and serve them up in a crispy-on-the-outside, fluffy-on-the-inside breakfast (or breakfast for dinner). Ginger ale–the secret ingredient–gives the batter effervescence and crunchy edges.

What do Belgian waffles and Japanese tempura have in common? They both benefit from a carbonated beverage to aerate the batter and create a light, crispy texture. While tempura often uses neutral-flavored club soda, I’ve applied the same technique to pumpkin waffles using ginger ale. It also lends subtle flavor.–Kelly Senyei

Lots of waffle recipes use club soda, here Senyei uses ginger ale to the same effect but with a subtle ginger flavor. Adding the effervescence of soda gives your waffles lightness by adding air. This is usually accomplished through separating and whipping egg whites to fold into the batter. This method is a real time saver. Smart, right? 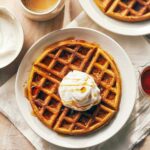 For the maple whipped cream

Pumpkin waffles with maple whipped cream are just as wonderful as their name sounds! And breakfast for dinner. They were perfect with crisp bacon and simmered soft apple slices.

Sometimes a change-up is exactly what you need. I was intrigued by the use of ginger ale and cornstarch for their texture. I found the maple syrup really took the whipped cream up a couple of notches. I made Leite’s pumpkin pie spice and it was a fresh, bright, fragrant mix. Use a whisk to mix in the ginger ale as it’s an extremely thick batter.

Most pumpkin recipes tend to taste like you’re choking down a spice jar with every bite (in a likely attempt to recapture the success of the PSL) and you’re begging for December to get here for peppermint to take over the commercial food landscape.

I’m happy to report this is not one of those recipes and explores the road less traveled through an exercise in restraint. They’re not overly sweet, with warm notes from the ginger ale and the silky maple whipped cream. It evokes a taste of comfort more than it does of fall, and I would be happy to eat these any day of the year, for any meal. We enjoyed them as breakfast for dinner, but they were delicious reheated in the oven the next morning for breakfast.

While not everyone believes whipped cream should be on a waffle, I encourage you to take a chance on this one, which is also delicious stirred into morning coffee and could easily upstage ice cream at a Thanksgiving dessert spread as a pie topping. This recipe is a great back-pocket recipe for fall as well when you’re making a recipe that doesn’t use the entire can of pumpkin and need something to use up that residual last half-cup. I absolutely love this recipe.