These salmon fish fingers with asparagus and spring peas are an easy, healthy meal that uses an innovative couscous coating on the salmon and captures the best of spring vegetables.

The brilliance of these salmon fish fingers with asparagus and snow peas isn’t just in the buttery, perfectly cooked spring veggies. The genius lies in the approach to salmon, in which gently spiced cooked couscous forms a surprisingly superb (not to mention remarkably quick-to-make) crust for the salmon. The cooked couscous serves as barrier between salmon and skillet, ensuring the fish remains moist while creating a crisp textural contrast.–Renee Schettler Rossi 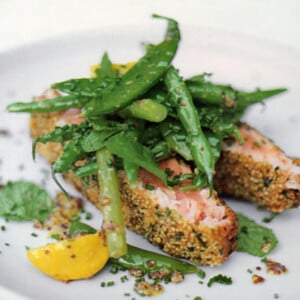 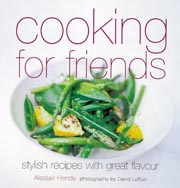 For the fish fingers

For the buttered vegetables

The spiced couscous used as the “breading” creates a delicious crust on the fish and keeps the salmon moist and flavorful.

I used asparagus, zucchini, and snow peas for the vegetable mix and this made a great vegetable accompaniment, usable with just about any other beef, poultry, pork or fish dish. This easily serves 6.

All of the vegetables were blanched to a bright green color in 1 to 2 minutes. If you use a big enough pot, you could probably do the vegs all together rather than one at a time (less fussy!)

The crust on this fish was different and delicious. I would have thought that a couscous crust would be too time consuming, but it really wasn’t at all. The method for cooking the couscous left it dry and perfect for turning into a crumb.

The vegetables were perhaps a little big on the butter (and I love butter!), but an added squeeze of fresh lemon at the end would provide some balance.

I made this twice. Interestingly, the last time I was a bit short on couscous for coating, and this time I had the right amount.

I used baby zucchini and green beans. I think broccoli would also be good. First time I used frozen peas. I blanched my vegetables for 1 1/2 minutes each. I prefer them to still have some crunch.

My experience first time around was that trying to cut the fish fingers in half was difficult and led to the crust falling off. This time by accident I was cutting my own fillet into fingers, and I cut them half has big as recommended. This was better because then each finger had a nice coating and didn’t require cutting after cooking. For cooking, first time around it required closer to 12 minutes to cook as the fillets were quite thick.

This time they were smaller pieces, but still around 7 to 8 minutes total cook time. I think that obviously such a size of fish would usually take less, but only if its in a pan that is not full.

I have a large carbon steel pan that could hold and cook all the pieces at once without overcrowding, but on a medium heat to brown the crust and also cook on each side for long enough, it did require more time than specified. I like to cook mine so its just done, I’m not sure how you’d describe it, but I like it so the flesh at the centre is still rosy but has clouded over and is no longer a bright pink/salmon color. I guess when it turns from translucent to just opaque.

For the vegetables, a little longer to heat through, perhaps 2 minutes, again just because of the volume of vegetables. One could do it in batches, but I did it all at once and it took a couple minutes to warm everything through.

This made 6 servings that were delicious for dinner as well as leftovers for lunch. Definitely will make again and use some of the flavors and methods in other cooking.

This recipe is a keeper.