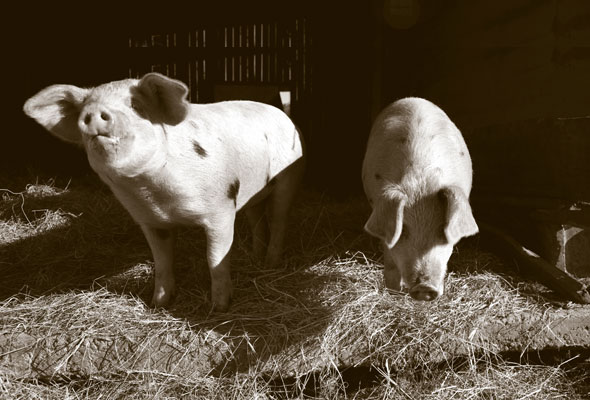 You haven’t lived until you’ve tried to get a ham through airport security. It was April, almost a full year of ham testing and cooking under our ever-more-ample belts, and we had one 14-pounder left from Wilbur, our pig.

“I’ll bring it for Easter dinner,” I told my mother.

It sounded pretty innocent in the thrum of long distance. It felt pretty innocent as we slung the frozen thing into a canvas bag and headed for the Hartford airport. It was pretty innocent until we ended up at the X-ray machine with the ham and both our laptops dumped into various tubs. I got stopped right away.

The agent was stern: pursed lips and bobbed hair. She snapped on her plastic gloves and reached into the bag. “Is this human?” she asked.

Yes, I wanted to say. It’s a chunk of me. After the liposuction, I just couldn’t part with myself. We’ve had such great times together: fresh hams, some even pan-fried, acres of prosciutto crudo, and the wet-cured one in the big bowl.

But I remembered those signs about jokes and terrorism. Was fat terrorism? Was ham? Maybe. Things were confusing in America.

The woman didn’t appear amused. “Why?”

Of all the questions, it’s the one I least expected.

Within minutes, the ham was out of its plastic bag. It was frosted and gray—not exactly at its best. She set it on that white folding table. A gaggle of TSA’s finest gathered around. They waved wands. They swabbed. They opened manuals. Finally, she walked back over, the glimmer of a smile around those thin lips.

If it had come from someone else’s pig or (God forbid) the store, would it have made a difference?

I slipped on my shoes and tried to get the ham and the laptops back into their respective bags.

“What were they doing?” Bruce asked when we met up again.

“The ham. They wanted to know what it was.”

“I hardly knew where to begin.”

And so we flew to Texas, where Easter was already summer, its warmth the best antidote to the chill still padlocked onto Connecticut. We arrived with our ham in tow, a fitting end for the last bit of Wilbur. No longer a blank, this joint represented so much possibility, so much history, so many meals. It would soon be roasted and become, well, the very best thing of all, the exemplar of hope: dinner on the table.