Skip to content
Home » The David Blahg » Giada and Me: Separated at Birth 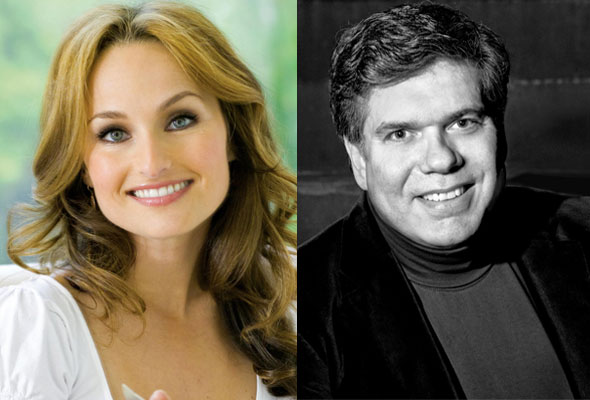 Giada De Laurentiis and I have a lot in common. We’re so similar, in fact, it’s highly likely we were separated at birth. Go with me on this.

That’s what I thought when she and I were gabbing on the phone the other day. (Okay, well it wasn’t just us on the line. It was a blogger conference call into Potter’s offices about her new book, Giada at Home, and five other people were also gabbing.) But, honestly—and I’m utterly, entirely certain Giada felt this—it’s as if everyone else just faded away. You know how in those TV shows where lost relatives are reunited the picture suddenly gets all fuzzy around the edges? That was us.

Here’s what I think happened: We were born to the same parents, that would be Momma and Poppa Leite, and somehow she got adopted out to a way more powerful, way more famous, way more wealthy family. (All these years, fate has been sending me signs of our connection, but I never caught on. For example, her “grandfather” Dino De Laurentiis produced tons of movies, including two of my favorites: Barbarella and Blue Velvet. If that’s not proof of kinship, I’ll take a DNA test.)

Our conversation on Wednesday, though, was about her and her new book. I contemplated asking her mundane questions, such as what’s your favorite recipe in the book or how do you stay so slim (a question not often asked of me). But I wanted to test my brother-sister theory, so I dropped this on her: “Giada, when I wrote my cookbook I was concerned that people might think some of the recipes weren’t “authentic, authentic” because they’re more contemporary. Do you have the same concern, especially since the recipes in your book are what I call “Catalian”—traditional Italian dishes filtered through a contemporary California perspective?”

[Here her quick-thinking publicist—Allison Malec, a publicist we share—must have picked up my book and handed it to her. I heard pages rustle.]

As only a long-lost sister could say, with such warmth, admiration, and just the slightest ring of sibling rivalry in her voice: “David, I love your book. It’s so gorgeous.” Bingo! The tone was 100 percent Leitesque.

Then she explained that she had to go no further than her grandfather (the powerful, famous, and wealthy patriarch of the family I could have been given away to if luck were on my side) to get that criticism. “He’s the first one to give me hell. He’s in his 90’s, and his family owned a pasta factory before World Word II. He always asks, ‘Why do you have to tell people to use jarred sauces or canned stocks?'”

“But this is how I cook in my home,”  she said into the phone, answering her own question. “I’m always trying to find ways to make cooks feel more comfortable in the kitchen, more confident of themselves. Are these dishes identical to your Italian grandmother’s? Probably not. But they accurately reflect my view of my heritage.” It was like listening to me talk. I knew she would understand. Although separated by thousands of miles all these years, we both, unbeknownst to the other, chose as our life’s work the tough task of wrangling traditional recipes from the Old Country while at the same time letting them reflect their surroundings: Hers, modern-day California, mine: modern-day Portugal. We both struggle and suffer under the yoke of presenting on our heritage in a positive light. (Well, her adopted heritage, because if we were separated at birth, as I contend, she’s really Portuguese.)

Being blood relatives, it’s not surprising that we share the same work patterns and ethics. After we each completed our first book, we thought, That’s it. I’m done. There’s nothing left for me to write about. Then Potter came a-knocking again, and being Leites—er, a Leite and a “De Laurentiis”—our family’s sense of work and obligation kicked in. We rolled up our sleeves, dug deeper into our heritage, and came up with even more. (Sis’s second book, Giada’s Family Dinners, was about, well, family dinners. My long-planned second book, which I’m not at liberty to discuss, mostly because it isn’t published—or even written—yet is about, interestingly enough, family and dinner.)

Sis went on to talk about how having a two-year-old daughter—that would be Jade, my only niece—really influenced the creation of the book. “This reflects my life at the moment, how I’m cooking now.” She told us that being a mother and wife changed her approach to food and cooking. She included fast, fresh recipes that work for her family and friends but don’t shackle her, ball-and-chain-like, to the stove or tradition. To make her point, she said, “I haven’t made fresh pasta in two years”—since the birth of Jade. It’s funny: That’s another defining similarity. I, too, haven’t made fresh pasta in two years.

After 30 minutes, we had to say our goodbyes. But I had been changed. Growing up a supposed only child, but always feeling as if a special part of me was out there floating around untethered, I remembered all those hundreds of times when I asked my parents for a sister, and they looked at each other guiltily. Now I understand that she was already out there, my doppelgänger twin, in the form of Giada De Laurentiis.

Note: No De Laurentiis was harmed—or stalked—in the writing of this post. All was written in good humor. Kinda.