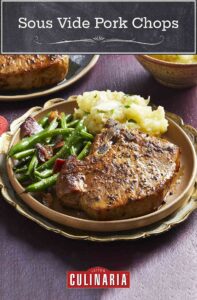 Sous vide pork chops might just be the gateway meal for those of you just starting out with sous vide cooking. A pretty simple approach to making some of the juiciest chops you can imagine. All it takes is salt, pepper, oil, and a little time.

Adapted from Daniel Shumski | How to Sous Vide | Workman Publishing, 2021

Once used only by professional chefs, sous vide—a technique in which food is sealed in a bag and then cooked in a bath of warm, circulating water—is now taking off with home cooks. The reason is simple—you can pick up a top-rated circulator (the device needed to cook sous vide) for about a hundred bucks, and in no time start enjoying perfectly cooked food. Suddenly, you’re cooking at a whole new level.—Daniel Shumski

Why do I have to sear sous vide pork?

The key to finishing sous vide meat is that last, super-fast sear. Hot oil will give you a golden brown sear without cooking the pork chop much further. The beauty of sous vide is that it cooks proteins without drying them out but they just don’t look the same as traditionally cooked meat. Make sure your oil is hot, your fan is on, and that you’re wearing an apron, and give them that finishing touch.

Can I substitute boneless pork chops for these sous vide pork chops?

Yes. You should find that they cook in nearly the same way as the bone-in pork used here and for the same length of time. Just be aware that they will require less time when searing. Without the bone, that super hot finish makes them more prone to overcooking.

Is it possible to overcook sous vide pork?

It’s possible, yes. It’ll take some time, though. Unlike overcooking something on the stovetop, sous vide pork won’t burn. You’ll definitely notice a difference in texture, though. It will get mushy and soft the longer it sits in the water bath. 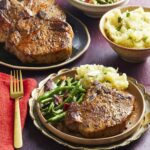 Don’t let the unusual combination deter you. Our testers gave a solid shout-out to this sweet and savory variation. When preparing the pork chops, sprinkle them with a pinch of crushed saffron threads and a small handful of raisins along with the table salt and pepper. After the sous vide cooking, scrape the raisins off the pork chops into a small skillet and pour the juices from the bag into the same skillet. After browning the pork chops and just before serving, heat the skillet with the juices and raisins over medium-high and bring everything to a quick simmer. Drizzle the pork with the hot juices, dividing the raisins evenly and sprinkling each pork chop with crushed pistachios.

Sous vide is a cooking method that really and truly makes me organized. It’s so easy to multitask and plan ahead meals knowing the main protein will be cooked to perfection. I knew the temperature and timing for the pork chop would work based on experience and it did.

The other reason I chose to test this sous vide pork chop recipe was for the variation of scenting and flavouring with saffron and raisins. Last minute, I realized that someone had eaten my raisins so I substituted black currants. I also used boneless pork chops because I had just bought some to cook sous vide before I noticed this recipe.

This recipe delivered as promised. The boneless meat was golden and saffron perfumed, the 90 minutes plus sear gave me a tender and juicy medium-rare pork chop. Because I used boneless chops, I did lose a bit of the meat thickness in the vacuum packing procedure. However, the recipe did recommend cooking to an internal temperature of 145℉ so it would be easy to check after searing to ensure no further heat was required for thicker cuts.

Sweet porky bursts from the raisins (in my case, black currants) were also delivered as promised. I served my chops with green beans, fresh paprika peppers, zucchini blossom, and saffron rice. Then I scattered the top with toasted pinenuts and black currants. Porky goodness for sure!

Ever since I got my Joule five years ago, I only ever prepare my pork chops sous vide. Pork chops (we know) can be fickle. Get them right, and they’re perfect: hearty without being overly rich, and the perfect centerpiece for any kind of meal. But they overcook too easily, leaving you with dry, dense meat without a lot of flavor.

Cooking sous vide pork chops not only means you get it right every time, but you can also cook it safely to a lower temperature. Thanks to the benefits of pasteurization, you can enjoy medium-rare pork that would otherwise be considered a risk.

This recipe offers the most basic preparation of pork chops sous vide, and is a starting point for all kinds of experimentation: add herbs or spices to the bag, top it with a sauce, etc. I made mine as written, except that I threw in some fresh thyme for good measure.

It was perfect atop a bed of spiced rice alongside a tomato-cucumber salad. With half of the pork chops, I gave them a quick sear both before and after the cook in the bath—those had a much better crust than the ones that were only seared after, without compromising the inner temperature.