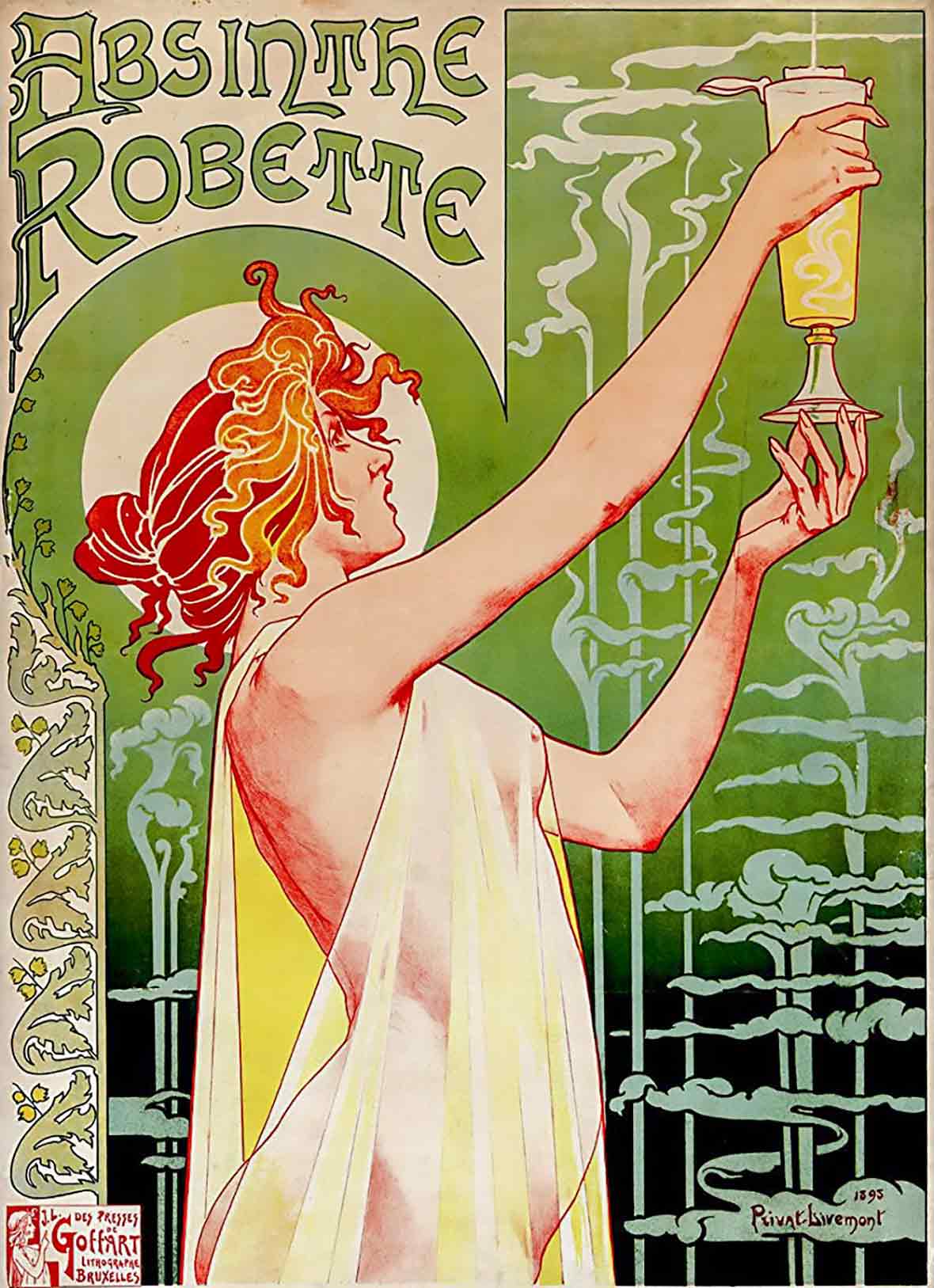 Absinthe, the drink of 19th-century slackers and ne’er-do-wells, had a moment a few years ago. Newly celebrated in the United States after a 97-year-old ban was lifted, the emerald-hued drink wasted no time in becoming the beverage du jour in neon-lit lounges with thumping house music. It took no time at all for a new generation to learn to dance with the Green Fairy, as the drink was known in its heyday.

No mere fashion or fad, absinthe is still having that moment. The storied drink continues to inspire a fascination among discerning drinkers. Today, nearly a century after it was scuttled from American liquor cabinets and 2,000 years after its inception, absinthe has settled into place at contemporary speakeasies as well as neighborhood restaurants and is once again a household term, if not a household stash. But it took a rather boisterous ride to get there.

Absinthe’s earliest incarnation was an elixir consisting of nothing more than wormwood (Artemisia absinthium) steeped in alcohol. The bitter herb’s etymology—Artemisia is a nod to Artemis, the Greek goddess of the hunt and of all things wild, and the Latin absinthium is derived from the Greek word absinthion for “undrinkable”—tells us quite a lot about what the ancients thought of this bitter concoction. Its original use was, perhaps not surprisingly, purely pharmaceutical, a panacea of sorts. The mathematician and scientist Pythagoras prescribed the potion, as did the writer Pliny the Elder.

Fast forward to the late 1700’s. In the intervening one and a half millennia since absinthe’s birth, the bitter beverage with anise overtones quietly evolved to be one of a class of digestifs, an after-dinner liqueur of sorts intended to stimulate the flow of gastric juices. Like many “medicinal” liqueurs of the current era, absinthe drew upon an assortment of bitter but aromatic botanicals such as anise, chamomile, coriander, dittany, hyssop, lemon balm, parsley, spinach, and sweet flag. Yet unlike the rest of these modestly intoxicating sips, absinthe was fueled with high-powered octane—136 proof, compared to the more modest 40 proof of most digestifs.

Despite—or perhaps because of—its alcoholic content, absinthe was once again promoted for medicinal purposes, this time by Dr. Pierre Ordinaire, a French expatriate living in Switzerland. Ordinaire generously bequeathed the recipe to Henri Dubied, the father-in-law of Henri-Louis Pernod, who quickly became the most ardent and prestigious purveyor of absinthe. Needless to say, absinthe experienced a resurgence. By 1834, the fervor for the strangely opalescent green drink was so profound—and Pernod so successful—that the company hired Gustave Eiffel, the engineering wizard responsible for the namesake tower that symbolizes all things French, to design the huge iron-vaulted Combier Distillery in the Loire Valley.

It wasn’t just absinthe’s powers of intoxication that made it compelling. The bitter potation’s primary ingredient was wormwood, which in turn contained the compound terpene thujone, a purported hallucinogenic that was rumored to heighten clarity, increase perception, and foster astounding creativity. Little wonder, then, that by the close of the 19th century, pale-green absinthe was not only the most popular drink among high-society in Paris, but among the ragtag groups of bohemian poets and painters of the Rive Gauche, among them Edouard Manet, Vincent van Gogh, Henri de Toulouse-Lautrec, Charles Baudelaire, Arthur Rimbaud, and Ernest Hemingway. The artists often portrayed the drinkers and the drink in their works, while writers extolled the mind-expanding qualities of their muse in words.

Although absinthe was pretty tame by comparison to modern mind-altering drugs such as LSD and mescaline, it was nonetheless the 19th century’s boldest leap into altered states. In 1872, a French newspaper quoted a doctor who had subjected himself to absinthe—purely for purposes of research, of course. “The most curious thing about this transformation,” he explained, “is that all sensations are perceived by all the senses at once. My own impression is that I am breathing sounds and hearing colors, that scents produce a sensation of lightness or of weight, roughness or smoothness, as if I were touching them with my fingers.” He prescribed small doses.

The Green Fairy was, for good reason, summoned only after it was diluted with water and a soupçon of sugar. A special spoon was required, the neck of which had a distinctive kink that allowed it to rest on the edge of a pedestal glass without danger of slipping. The bowl of the spoon was nearly flat and decoratively perforated. Once the spoon was set in place, a lump of sugar was placed on the perforated bowl. Ice water was slowly poured atop the sugar, only to drip slowly, mesmerizingly, into the emerald-green absinthe below, causing the liquid to take on its characteristic cloudy appearance. Known as “surprising the spirit,” this act was repeated until the spirit was diluted three to five times over. The ritual, not something that could be rushed, no doubt lent much to absinthe’s mystique.

Absinthe’s powerhouse gut punch—some would say rotgut— made it the earliest casualty of the prohibition movement seething at the beginning of the 20th century. Belgium was the first country to ban absinthe, followed by Switzerland, Holland, and the United States. It was eventually outlawed everywhere except England, France, and Spain (where the brands Absenta and Ojen have been sold continuously for decades).

Not surprisingly, absinthe-like beverages tried to lay claim to absinthe’s fan base. Among the many replacements were Pernod and pastis, which contained most of the herbs found in the original absinthe recipe, save for wormwood—and, hence, no offending terpene thujone. Ouzo, Greece’s pseudo-absinthe, was drunk like the original—diluted with water—except it turned milky white instead of green. And vermouth, which contains a close relative of wormwood known as mugwort, drew attention not as something to brandish over a martini but as a proper drink all of its own. Mugwort was also a component of several other beverages both bitter and bittersweet, among them Amaretto, Altvater, Benedictine, Campari, green Chartreuse, and Fernet Branca.

The Combier Distillery recently began producing absinthe again, anticipating heightened interest following the ban. It was not disappointed. Bottles of what was once contraband flew off American liquor shelves in 2007, the first time any absinthe had been sold stateside—at least legally—since Prohibition.

Of course, today’s absinthe drinkers consider old-fashioned traditions, such as the absinthe drip, through post-modern eyes. Just as this younger generation reformulated its parents’ cocktails into newer, hipper versions, it’s made absinthe into a newer, hipper ingredient. Today’s mind-bending cocktail menus are far more likely to feature absinthe as an undertone, with concoctions such as gin, Lillet blanc, Cointreau, and lemon with a simple absinthe rinse, or even a few drops of the emerald alcohol floated on top of just about anything. Two millenia after its inception, absinthe is still going strong.

Perhaps the hippest of these new—or newly rediscovered—cocktails is one that tips its hat to Hemingway. He reportedly invented the iconic drink Death in the Afternoon not by pouring absinthe into water or wine, but something a little more lively. “Pour one jigger absinthe into a Champagne glass. Add iced Champagne until it attains the proper opalescent milkiness. Drink three to five of these slowly.”

Lanier, Doris. Absinthe, the Cocaine of the Nineteenth Century: A History of the Hallucinogenic Drug and its Effect on Artists and Writers in Europe and the United States. Jefferson, NC: McFarland & Co., 1995.