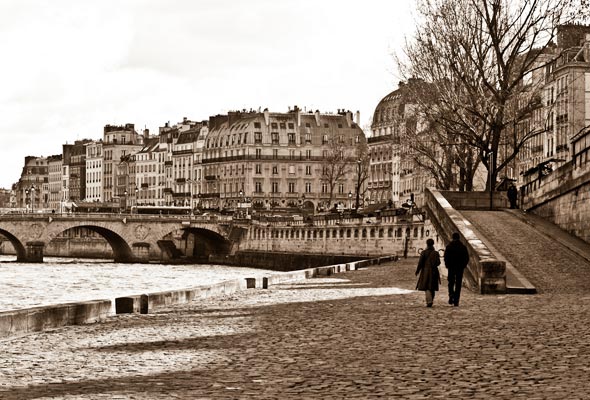 I arrived in Paris at the beginning of April, just as the song instructs. For the first time in my life, I had nothing to do, nowhere to be. My only fixed appointment was every Tuesday and Thursday, between eight a.m. and one p.m., at our local market.

Our nearest open-air market is at the intersection of a North African and Asian district on the boulevard de Belleville. I got the impression that at ten a.m. I was already late. As I walked up the rue du Faubourg-du-Temple, it was clear that the neighborhood had been up for hours. Delivery trucks blocked the cobblestone street, butchers in white coats chose whole sides of beef suspended on hooks like enormous dangling earrings. The boulevard de Belleville looked like a shantytown, with white canvas tarps and fruit crates as far as the eye could see.

As I made my way down the street, a man shoved a strawberry in my path. “Mademoiselle, goute, goute (taste, taste),” he said, trying to catch my eye. He handed me a slice of melon, broke open a pod of sweet peas. “Ca va, princesse?” I knew it was ridiculous, but after two years in England, it felt so good to hear this caressing tone of voice, to smile and lower my eyes, even if the guy was just trying to sell me a tomato.

On the next table were barrels of olives—wrinkled black, shiny green, and mauve—and small pickled lemons, bobbing to the surface like rubber duckies.

Behind the next stand was an older man, white bristles poking out of his beard, still bundled in a hat, scarf, and his winter overcoat on this warm day. He was almost entirely hidden behind a wall of greenery, small bundles of fresh parslsey, coriander, and mint stacked in dense, neat rows like a garden hedge.

I passed piles of carrots with their bushy green leaves, radishes sold in bunches like roses. There was something near the leeks that looked like a prop from Dr. Frankenstein’s laboratory, a knobbly root shaped like a brain, with dimpled ridges and tiny coiled stems. Céleri. It looked like something you might dissect rather than eat. I bought one, just to have a look inside.

There was clearly an event up ahead. Shoppers were stacked three-deep under a blue-and-white-striped awning, pushing their way toward the front. As I approached, I took in the mildest whiff of the sea. I nudged myself toward the corner of a large table packed with ice as water dripped on my shoe. Behind the counter, there was a man with large red hands and close-cropped hair, his apron tied across one shoulder like a toga. In a booming voice he abused the customers as he plunged his hands into a pile of sardines. I stared at the fish, and for the most part, the fish stared back at me. There were mounds of mackerel and trout with glassy eyes and shiny skin. There was an ugly one, fat and gray with a gaping red mouth that looked like it should have had teeth. There were piles of mussels, whole octopuses, long strips of squid, as thick as foam-rubber insulation.

Clearly I was too close to the table to be a mere spectator. The man with the big hands was getting impatient. A woman with a shopping trolley rolled over my toe. I pointed to the mackerel, said, “Deux, s’il vous plait,” and handed him a twenty-euro bill. He gave me a look that said “If you were older and uglier, I’d be grumpy right now,” and he deposited seventeen euros in small coins into the palm of my hand. I took my blue plastic bag.

So there I was, an immigrant with seventeen euros in small change, a bouquet of radishes, Frankenstein’s brain, and two mackerel.

When I got home, I took the first mackerel out of the bag. His skin was slick and iridescent, with black spots that fanned out in a pattern on either side. This would make a nice handbag, I thought, as I lost my grip and he fell into the sink. Slippery little bugger.

I gold hold of him again and put him on a plate. I knew there were things I had to do to him. Dirty, violent things. I thought about all the things I knew something about—eighteenth-century bookbinding, Victorian photography, Renaissance painting. Somehow I had missed this particular skill on my carefully groomed résumé.

The little guy was still looking at me. It was a superior stare. I’m on to you, he said. You’re nothing but a New York princess. You have no idea how to turn me into dinner. He was speaking French, so it was hard to tell, but I think his last words were something like, Pixie dust, my ass.

I took the knife and pressed its pointed tip into the belly of the fish. I hesitated, searching for something civilized to think about during my upcoming act of brutality. Had Jane Austen ever gutted a fish?

The knife made a ripping sound, like an uncooperative zipper.

It is a truth universally acknowledged…

I had hold of something now, soft and dense.

…that a single man in possession of a good fortune…

I pulled out the tiny heart and liver.

…must be in want of a wife.

I yanked out the final membrane, guts dripping from my hands. Tell Tinker Bell to put that in a pipe and smoke it.

After the initial carnage, the rest was easy: white wine, onions, and a sizzling hot frying pan. The fish tasted terrific, although I’ve no idea if it was the wine or the adrenaline.

Over the next few weeks I became a regular customer at the market, walking with my head held high.

The fish man was expecting me. I picked out my own mackerel, two the same size, slick but not slimy, wiping my hand on the apron wrapped around the pole. There was a flicker of recognition in his eyes as I handed over my three or four coins.

“Vous avez un copain? (You have a boyfriend?)” he said, holding on to one end of my blue plastic bag.

“Oui,” I answered with a half smile.

“Does your boyfriend work on Mondays? Because me, non.”

I looked my mackerel straight in the eye.

One slippery little bugger at a time.

© 2010 Elizabeth Bard. All rights reserved. All materials used with permission.

Elizabeth Bard is an American journalist and author based in Paris. Her first book Lunch in Paris: A Love Story with Recipes was published by Little, Brown. Lunch in Paris has been selected as a Barnes & Noble "Discover Great New Writers" pick for Spring 2010. Bard's writing on art, travel and digital culture has appeared in The New York Times, The International Herald Tribune, Wired, Time Out and The Huffington Post. You can follow Elizabeth's continuing culinary adventures at elizabethbard.com.