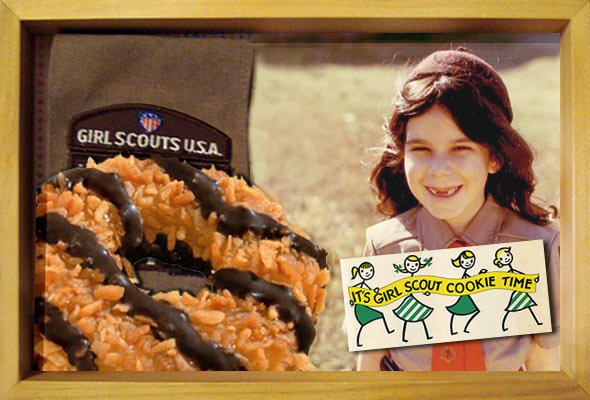 I was a reluctant Girl Scout.

I’d like to be able to say that this was for the usual principled reasons commonly held by nine-year-olds: opposition to the vaguely militaristic origins of founder Juliette Gordon Low’s organization, a feminist rejection of all those sewing and baby-sitting badges. But the truth is that my discomfort sprang from much less noble roots. I just didn’t fit in.

At school, I got along fine with the girls in my troop. But thrust into the maelstrom of theextracurricular activity that is scouting, I felt constantly out of place. Crafts weren’t really my thing. I was terrible at softball. And I got freaked out when, in one of our quarterly attempts at collective altruism and goodwill, we visited a nursing home and an elderly man in a wheelchair kept tugging on my badge sash, telling me to “give me some sugar.” (In case you hadn’t guessed, we lived in the South.)

There was also a fair amount of religious activity. We made ornaments at Christmas and decorated baskets at Easter. Occasionally, we put on our uniforms and went to church. None of this would have mattered if it weren’t for the fact that I wasJewish. Once, before the troop attended Sunday Mass at an Episcopalian church, my mother took me aside and sternly warned that I was not, under any circumstances, to kneel during the service. One self-conscious, pre-pubescent Jewish girl dressed in green amid a churchful of kneelers. Do I need to tell you what I did?

Camping should’ve been my salvation in scouting. For as long as I could remember, I’d attended summer camp, where camping meant cooking Hebrew National hot dogs on sticks and soulfully singing The Circle Game around the campfire before falling asleep on the bare ground, allowing our counselors to smoke their joints in peace. Consequently, I was a genius at fire-building, and could expertly tie a tarp. But those skills were unappreciated by my fellow scouts. When my troop went camping, we ate weird stews from a can heated over a stove that the scout leader had packed in her station wagon (unbeknownst to my mother, we also thanked Jesus before we ate them), we slept in musty tents permanently nailed to wooden platforms, and I’m pretty sure no one was smoking pot.

But of all the things that contributed to my profound sense of Girl Scout alienation, the cookies were the worst.

To judge from the organization’s literature, you’d think selling Trefoils was some kind of enchantingly delightful endeavor, an amusing yet educational opportunity in bonhomie and proto-capitalism. Colleen McBride, with her silky blond hair and her two older brothers who could get the rest of their football team to stock up on boxes, sold scads. So did adorable Kate Lundberg, with her bouncy pigtails and her scarily intense fourth-grade ambition. They might have even liked selling cookies. But for me, shy and awkward, the annual ritual of walking around our suburban neighborhood, knocking on strangers’ doors, asking them to shell out a few bucks for some Do Si Dos was the preteen equivalent of the Bataan Death March. Each year, I dreaded the arrival of cookie season. And each year, the few meager boxes I managed to sell would sit in our living room awaiting delivery like a reprimand.

I was also a reluctant daughter. Unaware at that point in my life that all girls are mortified by their mothers, I was convinced there was something uniquely embarrassing about mine. Her unforgivable predilection for Barbra Streisand albums, for example. Her perverse preference for Handi Wipes, when everyone else’s mothers wiped down their counters with sponges. Her willful insistence on baking our birthday cakes from scratch, instead of using what was, clearly, the more desirable mix.

In the face of this excruciating behavior, I did what any reasonable girl, scout or otherwise, would do: I rebelled. I wore jeans and T-shirts instead of the “cute little outfits” she bought for me. I did my best to keep my friends away. And, of course, I refused the Thin Mints that were her favorite, eating only the Samoas my father loved, a declaration of allegiance so obvious it still astonishes me that she didn’t notice.

So it was not without a little chagrin that I learned my mother had volunteered to help my troop earn our cooking badges. There were ten requirements, which at that time included demonstrating mastery of how to turn on a top burner and baking a cake from a mix (in this, I noted smugly, even the Girl Scouts showed superior taste to hers). On the afternoon in question, we had to prepare a salad. Any other mother would have taken a bunch of iceberg and tossed it with a bottle of Kraft. But mine had something more complicated in mind. We would make a composed salad, which entailed placing a pear half, cut-side down, on top of a lettuce leaf, capping the wide end with a scoop of cottage cheese and adding almond slices to form ears, and raisins for eyes. We would be making, in other words, a bunny. I could’ve died. What would the other girls think of a mom for whom even salad had to be cute?

They loved her. They marveled at my mother’s creativity and laughed with pride at their own salad bunnies. Colleen McBride even tossed her silky blond hair and asked my mom if she could explain to her mom how to make one. In that moment, and maybe for the first time, I saw my mother not just in a different light, but as a separate person, a woman with talents and tastes that existed independent of their effects on me. After we had cleared away the remnants of our efforts (badge requirement No. 5: show that you know how to clean up), my mom set out plates of Girl Scout cookies as a snack. To this day, I prefer the caramel and coconut of Samoas. But that afternoon, I chose Thin Mints.

Based in Madrid, Lisa Abend is the Spain correspondent for Time magazine. She also writes for The New York Times, Food & Wine, The Atlantic, Saveur, and Slate. Her book, The Sorcerer’s Apprentices, about the stagiaires at Ferran Adria’s renowned restaurant elBulli, will be published by Free Press in March 2011.