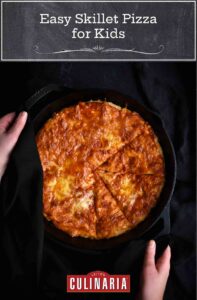 This easy skillet pizza for kids, a simple mozzarella-and-Parmesan-topped pie, is not only kid-friendly but also easy enough for them to make themselves, with a little supervision.

Mozzarella gives this easy skillet pizza for kids its melty gooey topping while Parmesan adds a cheesy flavor kick. If your pizza dough is cold from the fridge, you can leave it out on the counter for 1 to 2 hours to bring it to room temperature before starting. —America’s Test Kitchen

What else can I top this skillet pizza with?

Well, if you’re letting your kid be the chef, I’d suggest asking her. But fun toppings for kids could be sausage, leftover meatloaf, chopped chicken nuggets, or ground turkey or beef mixed with taco seasoning. Really, anything your kid likes.

Can I make skillet pizza ahead of time?

Yes! You can make the pizza right up to baking it. Instead of slipping it into the oven, simply cover the skillet and refrigerate the pizza for up to a day. When you want to eat, pick up the recipe at step 8 and cook the pizza on the stove and then transfer it to the oven to finish baking. (Then stand back and let the kids get all the glory!) 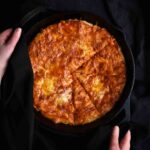 This easy skillet pizza for kids, a simple mozzarella-and-Parmesan-topped pie, is not only kid-friendly but also easy enough for them to make themselves, with a little supervision.
Prep 20 mins
Cook 15 mins
Total 40 mins
Mains
American
8 slices
251 kcal
5 / 2 votes
Print Recipe 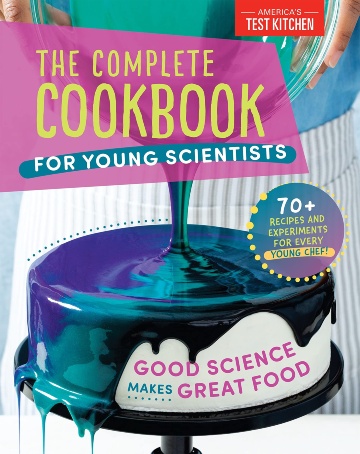 I’m so happy I tried this recipe. I wanted to make this skillet pizza as it didn’t require a baking stone or a cast-iron pan.

The only 12-inch pan I have is a non-stick which shouldn’t be put into a 500-degree oven, so I used my 10” heavy bottom stainless steel braiser. I used the full amount of dough, sauce, and cheese as listed. Worked like a charm. I also left it in the oven an additional 2 minutes to compensate for the thicker crust. The bottom was beautifully browned and crisp and the crumb was tender. And the garlicky sauce was wonderfully light and fresh. The amount of sauce and cheese was perfect for the size I made so I feel that it would be skimpy if using a larger pan.

Love this easy skillet pizza for kids–even though I’m not a kid! And, you know it’s a good one when a family member walks into the kitchen and says, “Wow! I gotta take a picture of that and send it to my co-workers!”

First, there’s pizza in the title. Second, simple to put together. Third, ingredients are easy to find and/or make. Fourth, extra sauce to make more pizza. Fifth, a technique that creates a delectable crunchy crispy crust on the bottom while maintaining a softer, chewier crust below the bubbly cheesy goodness on top!

I used my 11-inch All-Clad skillet with straight sides and it worked fine. (Only skillet I own that is oven-safe at 500 degrees.) Being that it was a little smaller in dimensions, I used a little less than the called-for half cup of sauce. (Seven tablespoons as opposed to eight.) Instead of rolling out the dough with a rolling pin, I used my fingers to press out the dough, which worked just fine. And wanting to save a second item from needing to be washed (the first being a rolling pin, the second a bowl), I spooned the sauce right from the food processor.

The seasoning was spot on, but we added red pepper flakes for serving. If you wanted to add some pepper flakes to the sauce mixture during prep, it would happily fit right in. I’m planning on adding a pinch the next time. For the mozzarella, I went with a whole-milk low moisture option from Trader Joe’s (the cheese pull was amazing!), along with their regular pre-made pizza dough. (Not the whole wheat.) It took the full ten minutes to get it to the doneness that we like.

This skillet pizza has definitely been added to my “make again and again go-to” files.