This banana rum cheesecake with maple rum sauce is made with roasted bananas, cream cheese, a pecan crust, and a boozy topping. We offer both a vegan and regular option. Either way, you won’t tell the difference.

This banana rum cheesecake is indulgent as can be, whether you make it with regular cream cheese or the vegan option. Maybe the kids will come home for Thanksgiving after all.–Renee Schettler Rossi 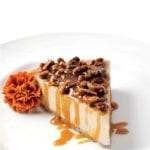 This banana rum cheesecake with maple rum sauce is made with roasted bananas, cream cheese, a pecan crust, and a boozy topping. We offer both a vegan and regular option. Either way, you won’t tell the difference.
Prep 1 hr
Cook 2 hrs 30 mins
Total 5 hrs 30 mins
Dessert
American
6 to 8 servings
935 kcal
5 from 1 vote
Print Recipe 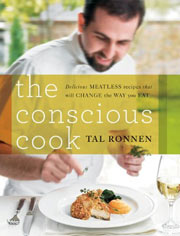 For the roasted bananas

For the maple rum sauce

For the pecan crust

For the cheesecake filling

*What You Need To Know About Making Your Own Nut Flour

To make your own nut flour, first freeze raw nuts overnight. Place about 1 cup frozen nuts in a food processor at a time and pulse until finely ground. Repeat as needed. Freezing the nuts prevents them from turning to nut butter in the food processor as the blade heats up—but be warned, it will be loud!

This is the best dessert recipe I have tried so far. No exaggerations, it is really that good. No water bath was used to make this cheesecake, but it still comes out moist and with a lovely smooth texture. While the cheesecake stands alone as an awesome dessert, the sauce and toasted pecans definitely take it to the next level.

I used regular butter, dairy cream cheese, and all-purpose flour. I made the pecan flour myself. While I think freezing the pecans is an essential step to grinding the nuts, I don’t know that overnight is necessary. I would probably experiment with this timing the next time I make it. The recipe doesn’t seem to make enough for a bottom crust, but it presses into the pan with just enough to cover the bottom. The bake time for the crust was accurate.

I roasted the bananas for 24 minutes before any juices were noticeable coming from the bananas, and they were soft at this time as well. I had no issues with processing the cheesecake mixture. I was concerned that my food processor bowl was too small for the amount added, but there was no problem. I poured the rum into the top with the motor running, which seemed to help create a more uniform mixture.

I baked the cheesecake for 55 minutes total. The center was still too wobbly at 45 minutes, and a toothpick didn’t come out clean.

I used grade A robust flavor maple syrup, as I couldn’t find grade B. I think this made the sauce much thinner than what the recipe intended, but it was still delicious. After 15 minutes of simmering the sauce, I didn’t notice much in the way of thickening but it tasted good so I took it off the heat.

It takes a long time to make, but it’s so worth it. About an hour and a half to roast the bananas, make the sauce, toast the pecans, and prepare the crust and cheesecake for baking, almost an hour to bake, an hour to cool, then at least 3 hours in the fridge. Total time equals a whopping 6 and half hours, but I will be making it again!

As a gesture of genuine love, I made this recipe. I do not like banana. I do not like rum. And I am mostly indifferent to cheesecake. But when my husband saw this recipe, he squealed like a child, and I had no choice but to make it for him.

I made my own pecan flour following the instructions. And I used the all-purpose flour and dairy options provided in the recipe. As someone who was vegan for over 30 years, I can bet that the vegan version of this recipe is probably fantastic. The non-vegan one was really pretty great (which, from my early caveats, is high praise from me). The pecan crust was neat. I used salted butter in the recipe because Earth Balance, the vegan version, is quite salty. The rum sauce is amazing. And again, I do not like rum or most things with alcohol added. Roasting the bananas in their skins was new to me, simple, and kind of fun. And other than waiting for things to cool or set, this recipe was really quick to put together. I think I had the whole recipe ready to cool in less than an hour. And then we had it for dessert later that night. My husband was pretty in love right off the bat. I would have liked it a hair sweeter, maybe a bit more brown sugar in the mix. But I still enjoyed it. If you love banana’s you will LOVE this recipe. If you don’t like banana flavor, you may still be surprised at how tasty this recipe actually is. I was prepared to hate this. I had to eat my words, as well as some tasty cheesecake.