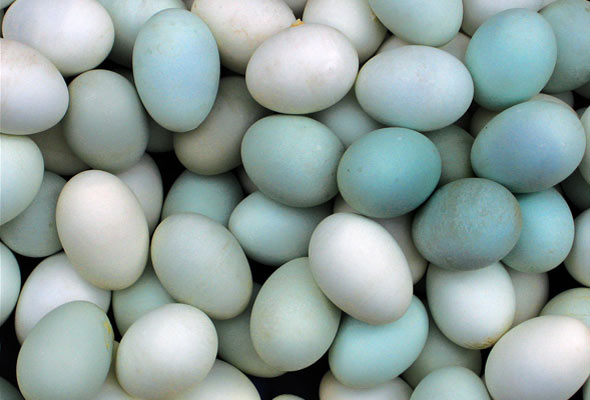 For some, the perfect egg requires no accompaniment aside from the basic, fundamental sunnyside-up technique. And, perhaps, a sprinkle of coarse sea salt.

For others, though, there’s comfort to be found in the reassuring sameness of what’s served on the side each and every time. Wild mushrooms sautéed in duck fat. A schmear of pureed aji Amarillo. Cold leftover polenta crisped in a hot cast-iron skillet. A bowl of Captain Crunch. Anything goes.

Given our curiosity—okay, our insatiable voyeurism—we asked chefs, cookbook authors, home cooks, and just about anyone who would talk to us what they prefer on the side, on top, or underneath their eggs happy-side up.

The responses reveal creativity, versatility, and more than just a little free-spiritedness, whether for breakfast, brunch, lunch, dinner, or a late, late supper. Some of these notions we just like to contemplate. Others we intend to replicate. But all of them are shared below. You know, in the interest of surprising and inspiring.—David Leite

Eggs, sunnyside-up with toasted brioche.
—From the menu at Sunny Side Up Café in Sayreville, NJ

I’m not a toast man. I like them with either bacon or sausage. Obviously, I mean bacon or sausage from pork that’s been fattened on acorns and out in the woods eating bramble roots.
—Joel Salatin, owner of Polyface Farm, in Virginia’s Shenandoah Valley

One of the A16 staff favorites at the end of the night is an egg poached in whatever our zuppa or minestra for the day happens to be. We heat up the soup in a shallow sauté pan and gently poach the egg in its liquid. When it hits the bowl, the egg is essentially sunnyside-up. Right now, we’re featuring a zuppa from Puglia called cecamariti or “husband-blinder” zuppa. Basically, it’s served so piping-hot that it blinds the husband as he eats it. The soup has a variety of dried beans as well as fresh ceci beans in it, and it’s the perfect zuppa for adding an egg. We don’t have it on the menu, but we all love to eat it.
—Liza Shaw, chef and owner, A16 in San Francisco

A stout, preferably one with some oatmeal and coffee in there, which is obviously a good choice for breakfast. I like Founders Breakfast Stout. It makes a second version, which is essentially the same beer, but aged in bourbon barrels. It’s called Founders Kentucky Breakfast Stout. Another is Beer Geek Breakfast by Mikkeller. It’s also a coffee stout. And sometimes I like hash browns, although that’s not a daily thing.
—Josh Knowlton, who works at Bierkraft, a lovely little emporium in Brooklyn that carries more than 1000 beers

“’The Great Equalizer.’ It has been said of many things, including education, death, and the three-point line. But what holds this title in my kitchen is none other than the humble egg, cracked into a hot, oil-slicked skillet, and fried. Unless you’re a sucker for cold pizza or day-old Chinese takeout, ‘leftovers’ is a word not typically associated with breakfast. But in the early-morning hours, these suppers make a stellar second appearance under the sunny canopy of a fried, runny-yolked egg.

“‘Eggs,’ declares Fran McCullough, having given the question more thought. ‘My favorite is Judy’s [Judith Rodgers, author of The Zuni Café Cookbook] eggs with crunchy breadcrumbs, which is kind of elegant in a very humble way.’

I would probably say my go-to wine is Chenin Blanc from the Loire Valley. It has a nice minerality and a touch of richness. As it ages, Chenin Blanc becomes honeyed and more viscous, playing off the richness of the yolk. I would say no to a Grüner Veltliner or a Sauvignon Blanc. You need more complexity, something with a clean acidity to finish it off. Something that will meet the egg halfway and not overwhelm it, like the Pithon-Paille Chenin Blanc, Anjou Loire France 2008.
—Claire Paparazzo, wine director at Blue Hill NYC, who imparts advice to diners every evening at Dan Barber’s Manhattan outpost

I love really simple food. When I go to eat eggs for myself, I like them with the yolk that is rare. I usually toast some bread and I like to dip it into the yolk. I have really great memories of eating eggs in Italy as a child, with the yolk really loose.
—Massi Boldrini, chef and owner of Riva Cucina in Berkeley

Eggs On Virtually Anything

It’s a vast subject, of course. I live off of fried eggs, partly because I’m so busy, and they’re so quick. I tend to put eggs on things. What I put them on tends to be what’s around. Often leftovers, whether a few bit of mushrooms or whatever’s around. I love eggs on cooked or raw greens, either as an instant breakfast or dinner, especially dandelion or arugula that’s dressed with good olive oil or sherry vinegar.

Our weekend brunch used to feature a wok-fried egg with pork belly, Pullman bread, and green mango salad. I wish we still had it on the menu, it was probably one of the best brunch-type dishes we offered. It was essentially eggs, bacon, and toast, but it had a little bit of spice from the sambal udang kering and a little sweetness from the salad. I would love for that dish to come back.
—Joe Tangnui, general manager of Fatty Crab, in New York City’s West Village and Upper West Side

On a hamburger. That’s definitely my favorite accompaniment. I was vegetarian for most of my young adult years, so I didn’t have eggs at all. Then in graduate school in Charlottesville, my favorite burger place  had a burger with an egg on top. It had all the regular stuff—cheese, bacon, tomatoes, lettuce, mayo—just with an egg on top of all that. It just seemed right.
—George Weld, owner of  egg in Brooklyn. It’s a casual little restaurant where diners can add a fried egg to their burger for $1.25