This Tahitian Crème Anglaise, a rich custard sauce that can be served hot or cold, is flavored with Tahitian vanilla beans.

Tahitian Crème Anglaise, a rich custard sauce that can be served hot or cold, is one of the world’s great culinary creations. My version is even better, if I say so myself, because it’s flavored with Tahitian vanilla beans, noted for their intense vanilla flavor, as well as with heavy cream.

This isn’t a diet specialty, of course, but one that’s welcome as an occasional treat. It’s also the basis for a number of super desserts, including a particularly fabulous vanilla ice cream.–Ming Tsai and Arthur Boehm 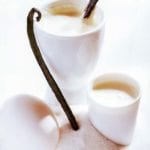 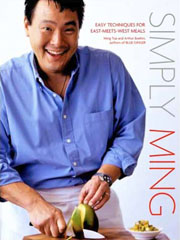 Following the manufacturer’s instructions, freeze the Tahitian Crème Anglaise in an ice-cream maker. Continue freezing the ice cream in the freezer, preferably overnight or at least 4 hours, and serve. Fold in 2 cups of bittersweet chocolate chips for Chocolate Chip Ice Cream.