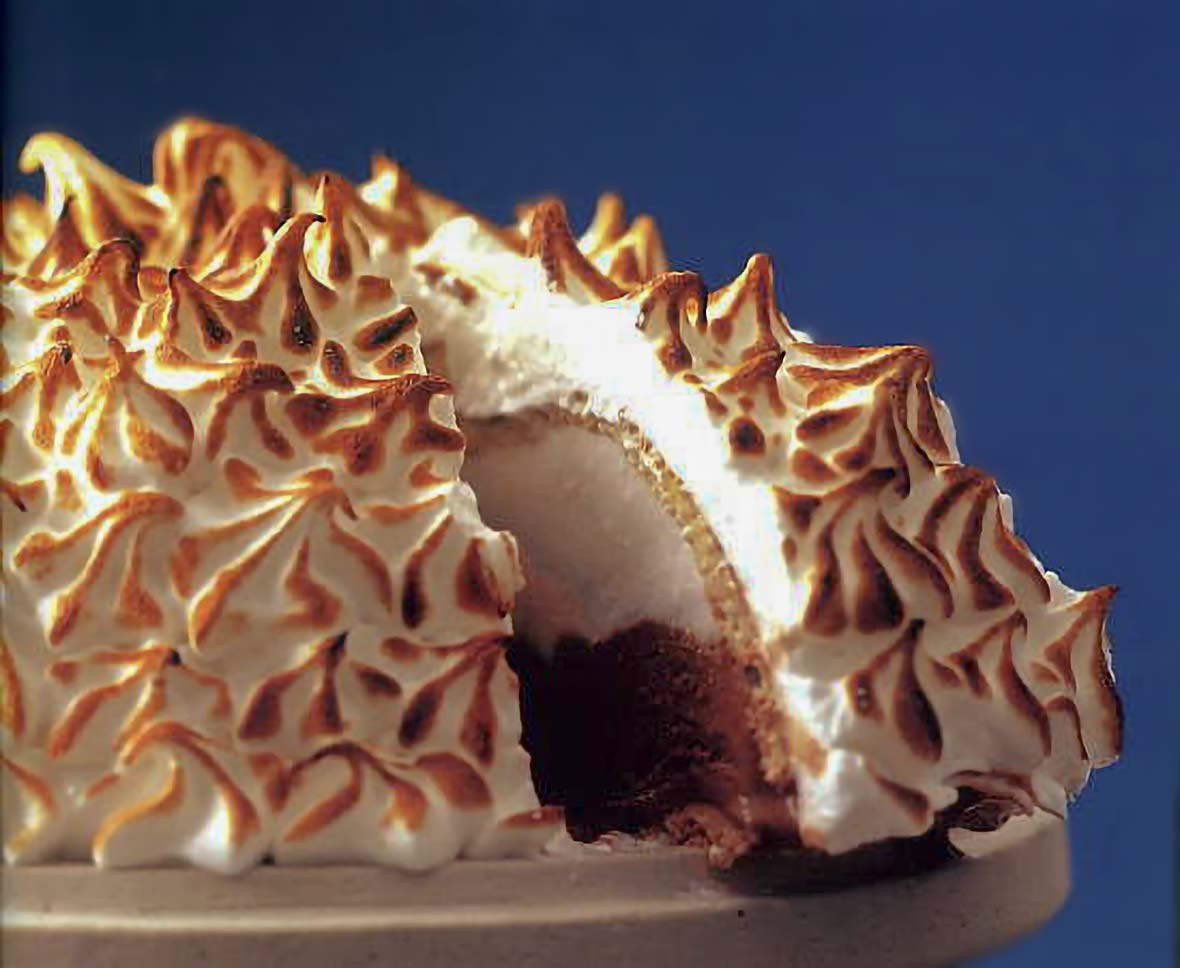 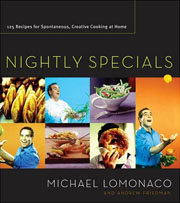 Make the coconut sorbet
Combine the coconut milk and 2 cups water and chill for several hours in the refrigerator.
Freeze the mixture in an ice cream maker according to the manufacturer’s instructions. Stir the toasted coconut into the frozen coconut sorbet. Keep frozen till ready to serve.
Make the chocolate ice cream
Melt the chocolate in the top of a double boiler, stirring occasionally, and being careful not to scorch the bottom.
Combine the egg yolks and the sugar in a bowl and whip to a creamy and smooth yellow.
Combine the milk, cream, and vanilla bean in a pot over medium heat and bring to a boil. Lower the heat and let simmer.
Whisk one-third of the hot milk mixture into the egg-sugar mixture to temper the eggs. Stir. Pour the tempered mixture into the remaining hot milk mixture while whisking the milk with a wire whisk. Stir with a wooden spoon until the hot milk-egg mixture thickens enough to coat the back of the spoon.
Add the melted chocolate to the hot milk-egg mixture by whipping it in with a wire whisk.
Strain the mixture through a fine-mesh strainer and cool quickly in an ice bath. Refrigerate the mixture for several hours before freezing.
Freeze the mixture in an ice cream freezer according to the manufacturer’s directions. Keep frozen till ready to serve.
Make the Baked Alaska
Preheat the oven to 425°F (220°C).
First make the sponge cake: In a bowl, whip the egg yolks with 2 tablespoons of the sugar and the vanilla until creamy and yellow.
In another bowl, whip 4 of the egg whites to soft peaks, add the remaining 4 tablespoons sugar, and continue to whip the whites to stiff peaks.
Carefully fold the beaten egg whites into the yolk-sugar mixture. Using the same care, fold in the sifted flour.
Line a cookie sheet with parchment paper, pour the cake batter onto the sheet, and spread out the batter to evenly coat the sheet. Bake on the oven’s center rack until the top is golden brown, 12 to 15 minutes. Remove from the oven and cool the cake quickly on a rack near an open window.
Begin to assemble the baked Alaska by cutting the sponge cake in 2 pieces to the shape of the bombe mold. (Cut a large piece for lining the mold and a smaller piece for the top, which later will be inverted to become the bottom.)
Line the bombe mold with plastic wrap and then place the larger piece of cake on top of the plastic.
Remove the sorbet and ice cream from the freezer and allow to soften for 10 minutes. Spoon or scoop the sorbet into the cake-lined mold, creating an even layer. Cover the sorbet with the ice cream in the same fashion, smoothing out the ice cream into one even layer. Place the remaining layer of cake on top of the ice cream layer to act as a seal. Freeze the bombe for 4 to 5 hours; or up to 2 weeks.
Preheat the oven to 450°F (230°C).
To finish the Alaska, whip the remaining 4 egg whites to soft peaks, add the 1/4 cup sugar, and continue to whip to stiff but not dry peaks. (This is your meringue.) Pour the meringue into a pastry bag fitted with a star tip. Unmold the bombe. Use hot towels to help loosen the bombe if necessary and invert the bombe onto a heatproof serving platter.
Remove the plastic wrap and pipe a decorative design of meringue all around the base of the bombe. Cover the entire bombe with this meringue in as decorative a design as you can manage, being as creative as you like, but working quickly to avoid melting too much of the ice cream and sorbet. Bake the Alaska for just 5 minutes, to lightly brown the meringue but not melt the ice cream.
Remove the baked Alaska from the oven, slice into individual servings, and serve immediately.
Print Recipe