This ice float is a classic for a reason. You can vary the recipe to your taste, using chocolate sauce for an added boost of deliciousness. Either way, creamy ice cream and sweet bubbles are a match made on Cow Mountain, y’all.

The ability to designate National Food Days is one of the more unusual perks given to the President of the United States. It may seem a frivolous use of the office, but one can only imagine the lobbying efforts designed to promote just about any foodstuff. For instance, don’t you find it oddly comforting to think that the powerful root beer float lobby has been hard at work in the West Wing, wooing the halls of power with frosty ice cream sodas, just to ensure there’s a National Black Cow Day?  (Incidentally, it falls on June 10 this year.)

Although actually, the first true black cow day seems to have occurred on August 19, 1893. That’s when the notion of combining root beer and ice cream into a frothy concoction is rumored to have occurred to Frank Wisner, owner of a soda fountain as well as a mining company in Cripple Creek, CO. Although soda fountains were rampant at this point in our country’s culinary evolution, iced cream sodas didn’t yet contain ice cream. Instead, they were commonly made from either syrups combined with cream and cold soda water or cream mixed with flavored syrup.

As the story goes, on that particular moonlit night, Wisner was gazing at the dark Cow Mountain when its snow-capped peak inspired him to float a scoop of vanilla ice cream on top of his Myers Avenue Red root beer. Sure enough, he swapped root bear for cola, and ice cream for cream, and called the sweet creation “Black Cow Mountain.” It proved immensely popular, not just with the town’s children, but their mothers and the miners whom one might expect to find elsewhere—say, in a saloon or worse. Regulars promptly shortened the title to “Black Cow,” and since then, the term has been used interchangeably to describe root beer floats both with and without a dose of chocolate sauce. Consider trying it both ways before passing judgment.

Either way, the float’s frothy sinfulness, with ice cream slowly melting into carbonated goodness, has wooed far more palates than just those walking the dusty streets of Cripple Creek. Or, for that matter, the hallowed halls of the White House. —Gary Allen–Elsa Petersen-Schepelern 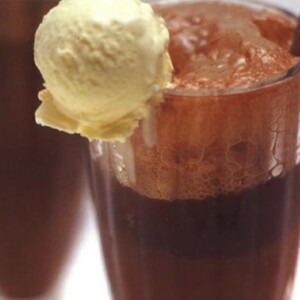 Substitute cola for the root beer.

I adore root beer floats, especially on hot nights when fruit popsicles aren’t enough. Somehow I’d never heard of a Black Cow, nor tried one. So when I asked my sweetheart if he knew the name of a drink that combined root beer, chocolate sauce, and ice cream, he quickly responded, “Oh, you mean the Black Cow?” I was excited to see if this recipe lived up to my sweetheart’s memories. The Black Cow 2010 wasn’t what he remembered—instead, it was more of an adult drink with a less sweet chocolate sauce that worked better for both of us. I still love a classic root beer float, but this is a close second.

I did make the Hot Chocolate Sauce, and am pleased that it can be used in multiple recipes and desserts. TIPS: Chill the glasses in advance and use large ones, since stirring and adding the ice cream will result in a lot of foam. A milder root beer might not have enough flavor to stand up to the ice cream and chocolate, so choose wisely. I myself wish the root beer flavor was a bit stronger. Next time, I might scoop the ice cream in advance and pop the scoops in the freezer to harden up so they won’t melt so quickly into the float.