Gluten-free chocolate chip cookies are often the holy grail of gluten-free bakers. Crispy, butter cookies that are overflowing with gooey, dark chocolate–who could resist? Now you don’t have to, with Shauna James Ahern’s take on our own David Leite’s little lovelies.

Five years ago, I wouldn’t have believed this possible. Just diagnosed with celiac disease after a long bout of feeling lousy, I was happy to let go of the crusty ficelle from Macrina Bakery, the pumpkin pie at Thanksgiving, the cold beer on a hot day. But my attitude was not quite as blithe when it came to baking certain foods in my own kitchen. I’d spent a lifetime of afternoons making apple pies in the fall, sugar cookies during the holidays, and soft dumplings for chicken stew each winter. Mixing flour with butter and sugar sustained me through some mighty difficult times in my life. Still, living without gluten seemed to mean living without baked goods, except for the ones sold in stores. You know the ones I’m referring to—the ones that try to pass for the real thing but look and taste like compressed sawdust. Better to live without, I thought. With that, I gave away all of my dessert cookbooks. I didn’t think I’d ever bake again.

This only lasted for so long. After a few months, I craved the physical act of baking more than what I baked. Creaming butter and sugar in my battered KitchenAid. Smelling the vanilla extract before I poured it from the cap. Watching the dry ingredients mix with the wet to create a supple dough of sweetness. So I bought little bags of unfamiliar flours and returned to the kitchen.

People who bake with gluten follow the traditions that were handed down to them. Those of us who bake gluten-free make the traditions up as we go along. You could say it’s more exciting this way. My chef husband, Danny, arrived on the scene in the middle of my quest, and together we began inventing recipes—and cleaning up after our shared kitchen disasters. Like the time he forgot to add xanthan gum to a cake recipe we were creating. An ingredient I had previously only heard of in ice cream and molecular gastronomy, xanthan gum gives baked goods structure and lightness. Without this sort of replacement for gluten, a cake will puff up like a guy’s chest when he talks to a pretty girl, then collapse like his ego when she doesn’t return his call. We laughed and learned from that messy experiment, and kept baking.

Then, nearly two years ago, just a few weeks before my daughter, Lucy, was born, The New York Times published a story by David Leite. Actually, it was the photograph that grabbed my eye. A baking tray with warm chocolate chip cookies packed in tight rows, like little kids waiting to be released for recess. One look at the melting chocolate, the caramel color, and the crisp edges of the cookies, and I wanted one.

Oh, I wanted one bad.

And not just for the obvious reasons. I wanted to learn how to make these cookies so that Lucy and I could bake together. So that I could hand her one from the cookie jar when she came home from school someday.

Butter, brown sugar, baking powder, and eggs are gluten-free. That was easy. Dagoba chocolate tastes of deep, dark chocolate and of safety, since it’s made in a gluten-free facility. The trick was the precise proportions of bread and cake flours called for by David’s recipe. It took me nearly nine months of thinking and baking and baking and thinking to recreate those cookies, as well as some—okay, many—failures. Even after having worked with those little bags of now-familiar flours for a few years, they could still be relatively elusive—each recipe a new adventure.

The first batch, made with rice flour and cornstarch, tasted like packing material. Another early attempt came out heavy enough to fling at a burglar’s head. Garbanzo bean flour may have the necessary protein to replace the protein lost with gluten, but cookies made with it taste like falafel larded with chocolate chips. No thanks. I started using amaranth flour instead, as it has ample protein but doesn’t taste like beans. Sorghum flour has the texture of whole-wheat flour and lent the dough some heft, while tapioca and potato starch offset its heaviness. This time, we didn’t forget to add the xanthan gum. After all this, the thought of baking with all-purpose flour actually seemed pretty boring to me.

As I tried different flours and varying methods, Lucy learned to roll over and pull herself up to stand. She was nearly ready to wait expectantly at the kitchen counter by the time the batch came out of the oven. They were warm, disappeared quickly, and inspired companionable silence. I didn’t care if these cookies weren’t exactly the same as what I’d grown up with. Everyone in the room agreed: these cookies—these gluten-free cookies—were the best chocolate chip cookies any of us had ever eaten. Ever.

This is no longer David’s recipe. It’s my chocolate chip cookie recipe now, the one I bake with Lucy. She and I stand side by side while we make them. As I turn toward the cupboard to grab the flours, I see her stretch her arm toward the bowl of chocolate chips for another taste. “Hey Boo,” I call out, and she draws back her hand, smiling. She’s not even two. She’s still listening to me.

Yes, we’re making chocolate chip cookies together, from the recipe that I’ll pass along to her someday when the edges are frayed and stained with chocolate. Our recipe.–Shauna James Ahern

This recipe, which originally appeared on Shauna’s blog, inspired no fewer than 92 comments at last count. Suffice it to say, there were a lot of deliriously happy home bakers in the days after this recipe first went public–and there are even more today. 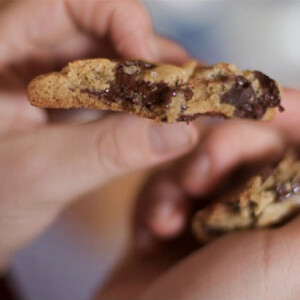 I’d already made these once before our official testing, and was delighted to have another excuse to make them. I only can say that these are amazing chocolate chip cookies. They’re soft in the middle, slightly crispy on the outside (they soften up after a day or so, though), with just a wonderful moist, yet slightly dense, texture. I love these. I used granulated cane juice, light brown sugar, and a different brand of semisweet chocolate chips, as I can’t find Dagoba. It’s problematic for me to have these sit for three days, though—I can’t seem to leave the batter alone.

This recipe rules and is my definite favorite chocolate chip cookie recipe. The combination of the flours and starches gives excellent results. Sometimes the proper ratios in gluten-free recipes are tricky. In this recipe, all the work is done for me! My non-celiac husband adores these cookies and prefers them to gluten cookies I’ve made in the past. I hate to admit this, but even the raw dough is great! The texture is so lovely and soft, yet chewy. These cookies make me smile. They are simply delicious.