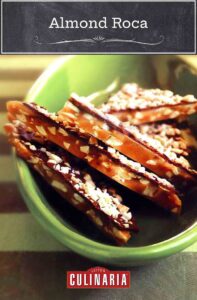 Almond roca is easier to make than you might think. A layer of almonds in caramel, covered with milk chocolate and more crushed almonds makes an elegant after-dinner sweet or a lovely little gift for someone special.

Adapted from John Scharffenberger | The Essence of Chocolate | Hyperion, 2006

This recipe can be doubled without any extra effort — just make sure you use a large enough pot.—John Scharffenberger and Robert Steinberg

Do I have to use corn syrup in roca?

You do, in fact. Corn syrup guarantees a smooth texture and helps to avoid that crystallization that sometimes happens when you cook sugar to a high temperature. Candy making is the one place where you shouldn’t make a swap for corn syrup.

Why did the butter separate out of my toffee?

Most often, this happens because of rapid temperature changes. Don’t be in a rush to melt that sugar—using high heat will just cause problems. As well, make sure to use a heavy-bottomed saucepan. Something with a thin bottom won’t conduct heat as well, leading to hot spots. If you notice the roca separating while still in the pan, just remove it from the heat and swirl it around until it’s combined again. If it separates once it’s been poured out, there’s not much you can do. Blot the oil and if it’s super hard, break it into pieces and use it in baking instead. 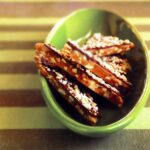 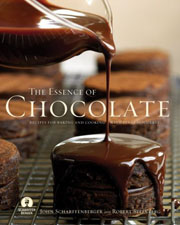 This was gorgeous and a calm introduction to the scary world of caramel making. If you follow the precise instructions you can’t go wrong. However, there is no time to spare so pre-measure the sugar, water, lemon juice, and corn syrup into a little bowl so your butter doesn’t burn. And make sure you have a pan with high sides.

I regretted making a half batch, so learn from my short-sighted mistake. Also, this makes a fantastic hostess gift, if you can bear to part with it. (Or keep it all to yourself and use it to make stellar sundaes with vanilla ice cream, crushed roca, and warm chocolate sauce!)

This is seriously good stuff! Easy to make, easy to follow directions, and great results. I appreciated the information about swirling the pan if the caramel wasn’t colouring evenly. I ran into that issue after eight minutes, starting swirling the pan and it coloured up beautifully. Not even tempted to stir.

The toffee is crunchy, as are the toasted almonds bits and the milk chocolate complements them both. It’s now tucked into the freezer because if I left it out, I would eat it all.

I’ll definitely be making this almond roca as gifts for people this holiday season. This took very little time to pull together, maybe a half-hour. And then I just had to wait for everything to cool. I easily got three and a half pounds. And I had a lot of fun making it, even though I was making it on a 98℉ day!

I personally like things a bit saltier than other people do. So I would have preferred using salted butter, but there was nothing wrong with it as it was. I also prefer dark chocolate to milk, so I may experiment with that in the future. I brought bags of this to a number of very excited friends this weekend. And suffice it to say, I am on everyone’s good list this week. I love love love this recipe.

This recipe produces a perfect sweet gift for the holidays or anytime for that matter. The recipe comes together fairly quickly, produces enough to gift several lucky recipients, and tastes pretty delicious. The directions are straightforward and very easy to follow.

I used 42% milk chocolate because 41% wasn’t available in any of the several stores I checked. The longest step in the entire process (at 40 minutes) was waiting for the caramel to cool down enough to add the melted milk chocolate, and the second was chopping the almonds.

Other than that, the caramel reached 300°F/150°C in almost exactly 15 minutes. I used a large deep pot to avoid any boilovers and that worked really well to contain the caramel and still allow for keeping track of the temperature without having to tilt the pot. I did have to swirl the mixture to encourage an even color, but once the mixture reached temperature and the almonds were added the additional stirring evened everything out and produced the perfect amber color.

The recipe produced a little more than 3 1/2 lbs of candy.

This recipe works and tastes really good. Of all the questions posed, the only issue I had was with the timing. The timing is closer to 12 minutes but the recipe seemed forgiving. (I have a thermometer that attaches to the side of the pot and if you’re candy making, it’s invaluable.)

I made this recipe while I was cooking dinner, so the caramel didn’t set up as quickly. Rather than putting it into the fridge, I used another pan to put over the top (overturned) and let it sit on the counter overnight. Then I finished the recipe in the morning.