This French classic sweet pastry, called pâte sucrée, is made richer and sweeter than ordinary piecrust with the addition of egg and sugar.

Chilling reduces the strength of the gluten in the flour when the dough is rolled. It also makes it easier to roll without sticking. Correct butter temperature is the key to making sweetened pastry by hand successfully. It shouldn’t be too firm (cold) or too soft (warm); the best description is cool and malleable.

Kneading the dough by smearing it with the heel of your hand is called fraisage. It not only forms the dough into a smooth, cohesive unit, but it develops just enough structure so the dough is less likely to tear or crack while being rolled and lifted. 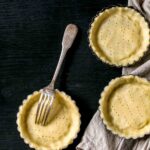 I’ve tried many recipes for sweetened pastry over the years, but this one still tastes and handles the best. It’s also known as pâte sucrée. The addition of egg and sugar makes the pastry shell richer and sweeter, yet less flaky, than an ordinary piecrust.
Flo Braker
Prep 35 mins
Cook 25 mins
Chill 1 hr
Total 2 hrs
Dessert
French
3.5 cups
922 kcal
5 from 1 vote
Print Recipe 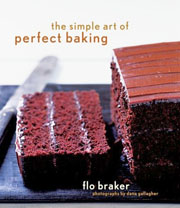 Fit the dough in the pan

The directions make this recipe look complicated, but using a food processor gets it done in no time. I used one portion of the dough after refrigerating it for 1 hour and it was very easy to roll out and shape in a tart pan. After baking the tart shell, I made a cream filling with mascarpone cheese, cream, sugar, and vanilla. Then I topped it with fresh blueberries, blackberries, strawberries, and kiwi and glazed it with heated apricot jam for a glaze. This was a very nice tart. The other portions of dough I kept in the refrigerator for 4 hours and I had to let them rest on the counter to warm up before I could roll them out. I did try pressing one portion of dough into a tart pan rather than rolling it but the crust wasn’t as even as the ones I rolled. The dough is great when served the same day.