These chocolate sesame balls are what I call my naughty but nice Chinese-style profiteroles. In this recipe, glutinous rice flour is used to make a snug casing for pieces of dark chocolate molded into a ball shape. The balls are coated in fragrant sesame seeds and then deep-fried. They expand and turn golden brown and the sesame seeds toast in the oil, giving a crunchy outer crust, while the chocolate inside melts. And if that’s not enough, melted chocolate is poured over—the ultimate grand finale! For chocolate lovers, this is a must-try recipe. So, forget the traditional Chinese red bean paste filling and hands up for dark chocolate.–Ching-He Huang

Just to set things straight, this recipe calls for glutinous rice flour, also known as sweet rice flour or mochikio, although due to some quirk or some schmuck at some point in the history of words, it actually doesn’t contain gluten nor is it sweet. Confusing, yes? The term “glutinous” simply refers to the flour’s stickiness when combined with liquid, which actually does stand to reason given that the flour is derived from sticky rice, which you’ve probably seen on menus—or, we hope, experienced firsthand—at Thai restaurants. Do not substitute anything labeled rice flour without the word sweet or mochiko or glutinous. Now, what to do with the rest of the package? Grab a Thai or Chinese cookbook and flip to the handmade noodles or the dessert chapters and report back to us so we can try that recipe, too, cuz at least one of us [Editor’s Note: Me!] keeps it as a staple in her pantry and is always curious to try something new. 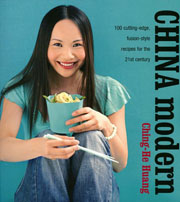