These rich Indian milk fritters are a traditional Diwali sweet and a Hannukah dessert. Diwali is the grandest holiday of the year in India, and it tends to fall between mid-October and mid-November. It’s also celebrated in several Southeast Asian countries and known as the festival of lights, signifying the triumph of light over dark—although given the spectacular desserts that abound, heck, it may as well be dubbed the festival of sweets.–Renee Schettler 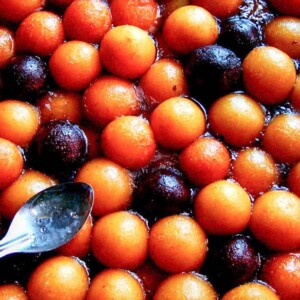 These Indian milk fritters, also known as Gulab jamun, are made with everyday ingredients by making a dough with milk and frying them and dipping them in syrup. A popular Hannukah and Diwali dessert. Here’s how to make them.
Prep 30 mins
Cook 10 mins
Total 40 mins
Dessert
Indian
20 balls
130 kcal
4.50 / 2 votes
Print Recipe 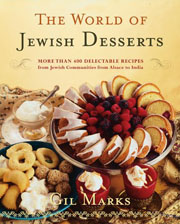 For the Indian milk fritters dough

Gulab jamun is a traditional Hannukah recipe among the Bene Israel of Bombay, combining the holiday’s two primary food symbols — dairy and fried. Although gulab means “rose water” in Hindi, some people omit it from the ingredients in this recipe. Originally, this dish was made by cooking the milk over low heat for an extended period until thickened. The invention of dry milk powder led to this easier version. [Editor’s Note: Although we certainly didn’t note any lack of milky richness in this recipe by using powered milk, Marks notes in his Encyclopedia of Jewish Food that a scoop of vanilla ice cream on the side more than makes up for any lack of dairy goodness—real or imagined.]