These hedgehogs–chocolate and rum buttercream creatures are known as igels in Austria, where these edible versions are from–bring a bit of whimsy to the everyday.

These charming chocolate and rum buttercream creatures, each with its own personality, are known as Igels in Austria. They captured my heart in Belgium and Germany, and I know you’ll love them, too. Include them on an assorted miniature tray for a touch of delicious whimsy.–Flo Braker

Uh, these little creatures—a cookie, actually—are most definitely hedgehogs, although with a little imagination and tweaking this recipe could easily make all manner of cookie creatures. Aliens, anyone? 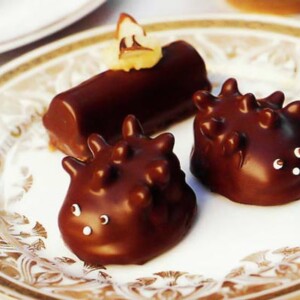 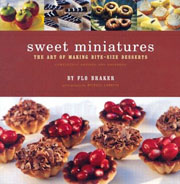 For the rum silk buttercream filling

For the royal icing

For an easier—and less expensive—way to decorate these hedgehogs, omit the pine nuts. Coat the hedgehogs with the chocolate glaze and, before it sets, apply chocolate sprinkles over 2/3 of each pastry. Pipe “eyes” on the uncovered portion with the royal icing.

These cute chocolates are a real conversation piece. The recipe for dough gives a higher yield than stated: I halved the recipe, and expected to get 24 biscuits, each 1 1/2 inches long, but ended up with 48. The buttercream and chocolate glaze amounts are correct for the stated yield. The extra biscuits came in handy—I used pine nuts to make quills for some of the chocolates, and I coated the rest of them with crumbled biscuits.

To make things easier, I made the hedgehogs over two nights. On the first night, I made the biscuit dough and buttercream. I also baked the biscuits that night (they took 10 minutes) so all I had left to do was the assembling, glazing, and decorating. The buttercream was fine in the fridge, covered, for two days. I slightly warmed it back to room temperature before piping onto the biscuits.

The recipe insists that the chocolates should be kept at room temperature, but I much prefer the texture of the buttercream filling when cold. At room temperature, it’s extremely soft and gives a less pleasant mouthfeel. The buttercream’s flavour is lovely, with the right amount of rum to be apparent but not overpower the chocolate. I think it’s worth losing the shine of the glaze to gain a firmer filling to the chocolates. The biscuit base is also very light and crisp, a nice contrast to the smooth buttercream. They can also be made into other animals with a little imagination. I made some little pigs, with chocolate-chip noses and ears made of heart-shaped sprinkles. All in all, these are a lovely addition to a party table. They’re worth the extra effort.