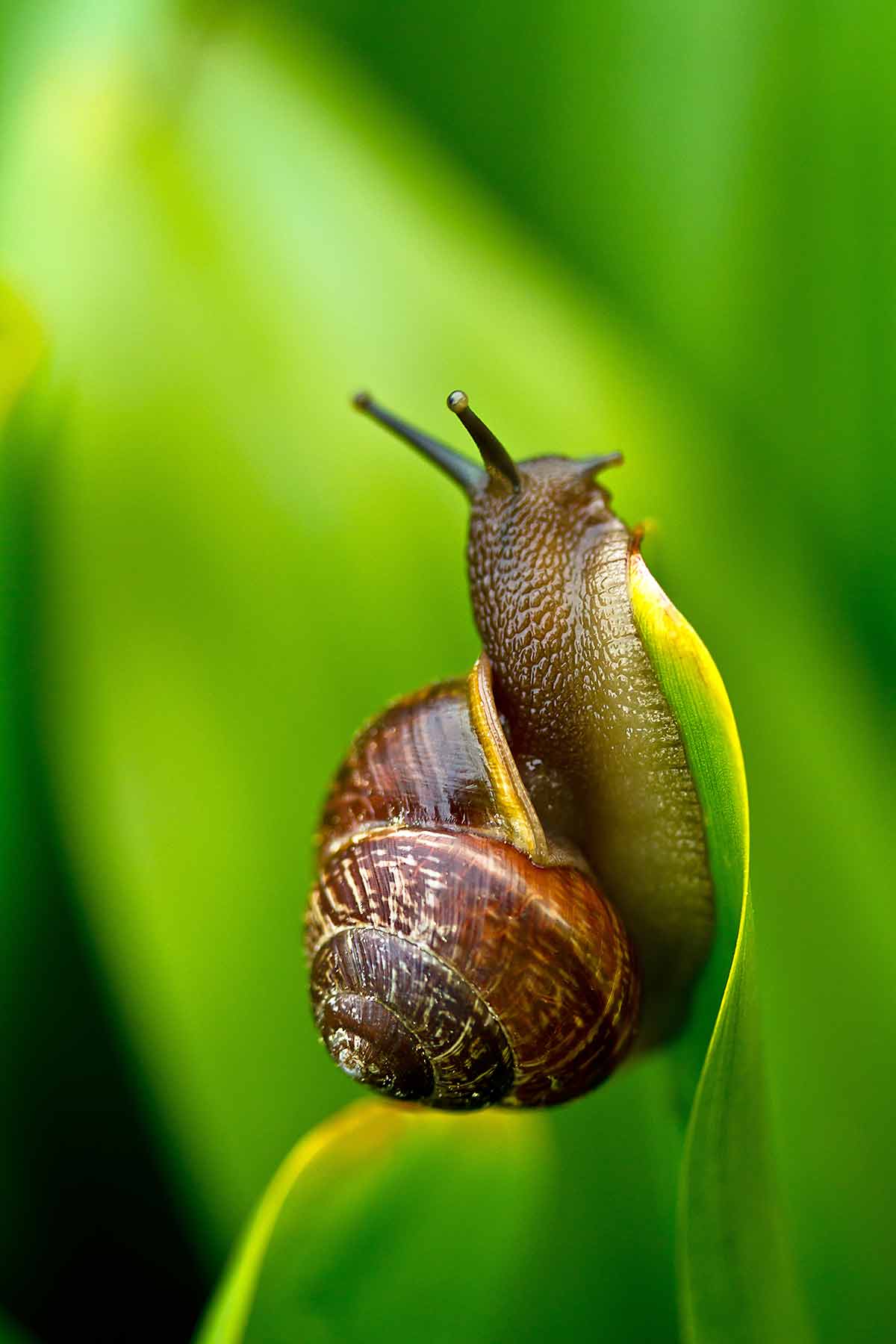 I wasn’t much of a snail eater before my summer in the Ardèche. But there I was, living amid the crevasses, valleys, and pine forests of southern France and staying in an old stone structure on a hilltop overlooking Banne, a medieval village de caractère tucked in the great round hills of the Cévennes. We were just three people in that sprawling, drafty old house—me, my friend Ryan, a painter from Texas with artistic ideas, and Nancy, another painter. And we were all in search of a new way of doing things.

Much of what felt new to us that summer was in fact quite old, starting with our centuries-old abode in the middle of French nowhere, a house that inhabited us as much as we inhabited it. Winds blew in all day and night through the open doors and windows as we padded in our bare feet from room to dusty room, and the floors kept gathering a fine reddish silt no matter how much we swept. During the day, fat yellow bees bumbled around the lavender bushes along the cracked and peeling exterior walls, grasshoppers gravitated toward the kitchen sink when no one was watching, and I once glimpsed a slim black garden snake winding its way down the cold granite stairs that joined the bedrooms on the first and second floors. At night, bats flew through the house, and sanglier, or wild boars, roamed the fields. Sometimes during dinner parties thrown on the crumbling stone terrace, we would hear boars snuffling through the grass a stone’s throw from our feet. Ryan would amuse dinner guests with his favorite party trick, demonstrating how he could easily wrassle a sanglier to the ground, Texas-style, if he wanted.

So there we were, a shaggy artists’ colony of three, looking for evening entertainment in a country house with no phones, no television, no radio, and no computers. We were broke and it was too far down the mountain for us to venture into town at night. Eating and cooking were our greatest forms of entertainment: I was a former French major and a gourmand, what I came to learn as an elegant French word for a person who practices gluttony as a hobby; Nancy was a chic New Yorker with a French boyfriend who made occasional appearances at the house and instructed us on the intricacies of la cuisine française (whether we wanted his advice or not); and Ryan was an avid eater of moldy saucisson de sanglier and any other French flesh he could get his hands on. If ever there was a group of people primed to learn the mysteries of preparing escargots, it was us.

Ryan first got the notion that we should learn the French way with snails because there were loads of them, as well as mushrooms, chestnuts, rabbits, and wild boar, all over the place around there, and snails are slow and easy to catch.

I went along with Ryan’s scheme because my head was filled with the essays of M.F.K. Fisher, and she knew something about the subject. “Slugs are awful. Slugs are things from the edges of insanity, and I am afraid of slugs and all their attributes,” she writes in Fifty Million Snails. “But I like snails. Most people like snails. Once in Dijon I was very dizzy for two days because I ate so many that inside me they changed into old rubber boiled in garlic. I still like them, and in France people eat some fifty million every year.”

One green morning in June after a night of heavy rain, Ryan visited our elderly French neighbors. As they drank their coffee in the garden, the snails came out.

“These are petit gris snails,” Madame said. “One can eat them.”

“Vraiment?” said Ryan, who was still learning French. “Really? How do you make them?”

“You must first starve them,” explained Madame, who had survived World War II in the mountains of France mostly because she and her husband knew the traditional ways of foraging for food and rendering all manner of findings edible. “You must collect them in a box and keep them there until they spit out the dirt,” she continued. “They taste best if you cook them with butter, garlic, and parsley.” It all sounded very promising—from a snail-eater’s perspective.

The petit gris, with its small gray shell, is a poor cousin to the more widely recognized escargot de Bourgogne, with its shapely tan-and-cream-striped shell that looks so beautiful when served in fancy bistros. But it would do. Ryan plucked about 20 of them from the grass, leaves, and bushes, and put them in a square tin box with some holes punched in the lid.

Yet once that tin box of snails was tucked safely away in a ceramic sink in a corner of one of the three rooms that comprised our kitchen, we promptly forgot about it. For a week or two we moved on to other adventures.

I can’t recall if it was Ryan, Nancy, or I who finally passed by the sink and remembered the starving snails. What I do remember is the awful moment we lifted the lid and queasily looked inside. What we found were barely living snails that had left foamy white trails of liquid crisscrossing the box and seemed to throw off a yeasty smell of damp earth. When we picked up the snails and peered at their undersides, we could detect a faint wet pulse that told us they were still alive. We supposed this meant their insides were now pure.

“I’m not going to eat those,” Nancy said. Ryan and I quietly ignored her and followed the instructions given to us by Madame and Monsieur. We rinsed the petits gris, rinsed them again, boiled them for a few minutes, then boiled them again. Nancy withdrew in disgust to her painting studio. Ryan and I didn’t care. He was young and Texan. I had recently left my husband and was looking for some fun. Why not eat the damn snails?

We carried on, simmering the snails on the stove in a rich broth of herbs de Provence, olive oil, garlic, and white wine. The astringent fumes went to our heads, as did the red table wine we had bought in plastic jugs at the local cave coopérative. My memory goes dim, but I do recall thinking at some point that we had lost our way and that Madame and Monsieur would surely have corrected our method. “I can’t believe you’re really going to eat those nasty things,” said Nancy during one of her periodic forays back into the kitchen to check on our progress.Yet we soldiered on, lighting the oven in the darkening kitchen so we could bake the snails in their shells as instructed, with lots of butter, minced garlic, and chopped parsley.

The oven was an ancient and temperamental iron beast that sat glowering along the kitchen wall, daring us to use it. We usually confronted it only to make our morning espresso or to cook an occasional oeuf. Cooking times with the ancient beast took vaguely longer than they should have. Waiting impatiently for our petits gris to undergo their transformation into escargots, we nibbled tomme de Savoie cheese and hunks of baguette while sniffing the garlicky cloud of snail-suffused heat that poofed from the beast’s maw.

“Why don’t we just say the snails are ready,” I said after 20 minutes or so. Ryan agreed. We traipsed through our old stone house to our favorite terrace, a parade of baking dish, green salad, more bread, more cheese, and more wine.

Finally, finally, we tucked into our experiment. I leaned into the aroma, took a deep breath of savory green warmth, and pulled my first snail from the dish. Our ragtag collection of cutlery, left behind by the house’s previous owner when she died, certainly didn’t include silver snail tongs and two-tined forks. Instead, we had sharp knives to poke around inside the shells and our fingers to pull out the tiny, mushroomy-looking morsels of meat.

I hesitated before putting that snail in my mouth. My thoughts suddenly strayed. Can a garden snail give you food poisoning? Botulism? My curiosity got the better of me and in the morsel went, resting a moment on my tongue as I registered the heat and rich, buttery goodness.

Truthfully, there were some good snails and some bad snails. The good had a firm chewiness and a taste reminiscent of smoked oysters, while the bad had a damp sogginess that didn’t hold together and tasted of dirt. I probably shouldn’t have eaten the bad, but I was deep into the experiment and needed to know the textural range of garden snails. Besides, anything drenched in butter, garlic, and parsley, and mopped up with crusts of baguette is bound to be at least a little bit good. Ryan and I scarfed up the lot. “Oh my god, you’ve got to be kidding me,” Nancy said, picking at her salad.

We didn’t make snails again. And our shaggy art colony didn’t last past September. Ryan fell in love with an English girl and they’re in Bristol now, making babies and tending to their wheat allergies. Nancy and I found our separate ways back to Brooklyn, where she follows a raw food diet and I’ve joined a community-supported agriculture group sponsored by my local greenmarket. I haven’t taken the opportunity since then to prepare petits gris or any other snails, for that matter. As I grow increasingly ambivalent about eating meat, the only animals I plan to cook this summer will be the free-range chickens that arrive in my CSA box.

My summer of snails is now 10 years behind me. Nancy and I met for lunch not long ago at a bistro in Brooklyn. She had tuna tartare and salad and I ordered escargots, for old time’s sake. The waiter delivered them to our table nestled in one of those dainty dishes specially designed to accommodate their little Bourgogne cream-and-tan shells. I studied the uniformly beautiful perfection of them as I struggled to grasp a snail with the filigreed tongs so thoughtfully laid before me. I managed to somehow keep hold of my first snail and not send it soaring across the table as I poked a two-tined silver fork into the shell’s opening and pulled out a sweet morsel of snail flesh. It was as fat and succulent as an oyster, and I chewed away happily as buttery garlic fumes and nostalgia washed over me.

“Remember when Ryan and I made snails in the Ardèche?” I asked Nancy.

Nancy rolled her eyes. “They were overcooked and rubbery,” she answered. “They sat in a box for a month. What a waste of time.”

Maybe. But we had nothing but time that beautiful French summer. I set aside the tongs and picked up the next snail with my fingers.

Joyce Hanson is a Brooklyn-based writer, web editor, and blogger who loves food, green living, and wicked women throughout the centuries. She has written for Brave New Traveler, covers food and restaurants for Crain's New York Business , and intends to continue to eat and write about it. You can read more about her summer in the Ardèche at Bad Girl Blog.