Skip to content
Home » Articles » Where You Going? Barcelona? Oh. 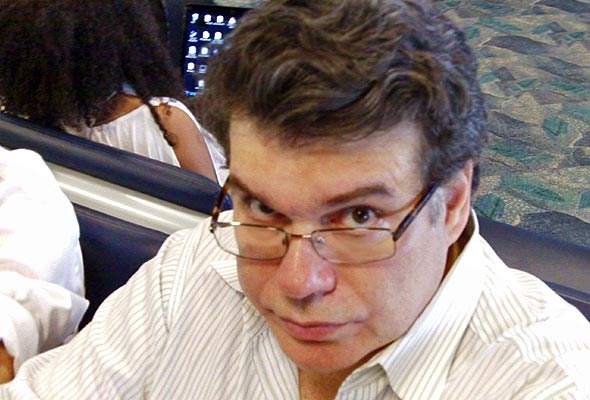 If you remember the lyrics of “Company” by Stephen Sondheim you’re dating yourself—or are a theater geek. But it’s an apt description of my leaving for Barcelona, the first part of my fiftieth birthday celebration/vacation. Utter indifference and a trifle of irritation. It’s not that I’m not excited about going to Spain or sharing the trip with The One. It’s all the stuff that goes into getting there. Travel would be wonderful if it weren’t for the traveling. I feel like a cranky old carnival lion that’s been poked and prodded and forced to jump through a bunch of hoops before he can finally sit down, relax, and eat a huge amount of animal flesh (in my case, turkey and mayo on ciabatta). And I present exhibit A, the photo of myself above in Newark International Airport before I left, after having battled a deranged NYC cabbie, an incorrect New Jersey Transit train schedule, indifferent Lufthansa personnel, and a heat wave so bad it caused the air train at the airport to break down.

Every time I travel, I tell myself that this time will be different. This time I’ll act civilized, normal, and give myself plenty of time to prepare. I imagine The One and me—like those folks in those god-awful General Mills International Coffee commercials from the ’80s—cupping warm mugs, the cats figure-eighting around our legs, as we laugh over our upcoming trip and grow misty-eyed over past ones.

I promise myself  each trip that I’ll set out my clothes, my iPad, arrange my computer bag, riffle through my toiletries to winnow them down to the essentials days before we leave. Then all I’d have to do on Departure Day would be to loll in bed, get buffed and fluffed, and taxi off to the airport.

That’s what Momma and Poppa Leite do. I remember our first trip on a plane; I was 10 years old. That woman single-handedly packed her bag, my father’s bag, and my bag two weeks before leaving. Nestled in those suitcases were a first aid kit for emergencies, coloring books and crayons for boredom, and a congenial “To Whom It May Concern” letter, in case any of the bags were stolen in transit—after all, social unrest was already burbling and things like the Patty Hearst affair were only a few years away. My dad got us safely to Logan International Airport, hours and hours before our flight, our powder blue Chevy Malibu Classic slipping into a long-term parking space like a boat in the America’s Cup. Always the vigilant mother, Momma Leite also called the airline a month in advance to make sure I had a window seat, as this was my first airborne trip, as well as to order a well-done hamburger and fries. And Eastern Airlines was only happy to oblige. Companies did things like that back then.

But somehow I, and the airlines, have lost something in the intervening years.

Me, I lost the Leitian ability to magically fold the contents of an enitre bedroom into a hard-shell Samsonite luggage, or perhaps never had it. How I thought I could get all my clothes, camera, video camera, iPad, shoes, sneakers, and sundries into a black free-gift-with-the-purchase-of-a-Calvin-Klein-Obsession-cologne-set bag is beyond me. And to do it three hours before leaving was insane. I also had to go to the post office, the Time Warner store, pharmacy, and Filene’s (for a belt) all within one hour.

But I got it all done, and we made it to the airport on time, although I was panting like a beached seal. Now we could relax. Oh, the naïveté never ceases.

And the airlines, what did they lose? Any sense of decency, customer service, and niceties. After finally arriving at the airport, The One and I were met by an implacable Lufthansa representative, bundled in a petite inoffensive-looking package, who was inflexible when my carefully packed carry-on (and only) bag was one pound over maximum weight.

“You can repack,” she said. And what am I going to do with the extra clothes I remove? I thought. Wear them? I stared her down and took out my camera and put it around my neck.

“There,” I replied. “One pound under.” I beat her at her own game. But my poor The One, he had to have his meticulously put-together bag, which he had been packing for several days, upended and dug into as he removed three books (another ringing endorsement for owning an iPad), magazines, and a sizable blue Tiffany bag, which I could tell from his expression that he was pained I saw. Content that his slimmed-down bag met her requirements, the Lufthansa rep sent it into the belly of the beast—perhaps never to return. We’ve experienced great baggage loss in our life.

At the gate I tried to board early. Considering we were seated two rows from the back, I didn’t think it was such a big deal, when who to my wondering eyes should appear but the Bag Hag from the front desk. Once again I was a pawn in her game. She shook her head, a beatific smile on her face—the kind of smile people in cults flash when you try to talk them out of their nonsense—and forced me to wait. But when she wasn’t looking, I slipped on and made my way back to our seats—seats that we were assured were wider and more comfortable than the others (and far from the restrooms), because there were only two in the row instead of three. Well, I soon discovered why: the plane tapers at its butt end, so there’s not enough space for three. Now, I wouldn’t have thought twice about the seats being excruciatingly uncomfortable—after all, I’ve been having trouble fastening my seat belts for a while now—if it weren’t for The One, who has maintained his weight for the past 16 1/2 years, having trouble, too.

Determined not to add insult to injury, after all The One paid for the tickets, I said nothing to him, even when we both could tell we were just feet from the bathrooms, and instead lost myself in 6 1/2 hours of my iPad. Two movies and one-half book later we arrived in Frankfurt, then transferred to Barcelona. After checking in at the Hotel Omm, truly as peaceful as its name, I dropped my bag in our incredibly spacious room, fell onto the bed, and slept for 8 1/2 hours.

This morning, with the traveling-traveling part of the trip over, The One and I are set to explore, eat, and get a cup of real coffee and laugh at it all. More Barcelona dining to come.