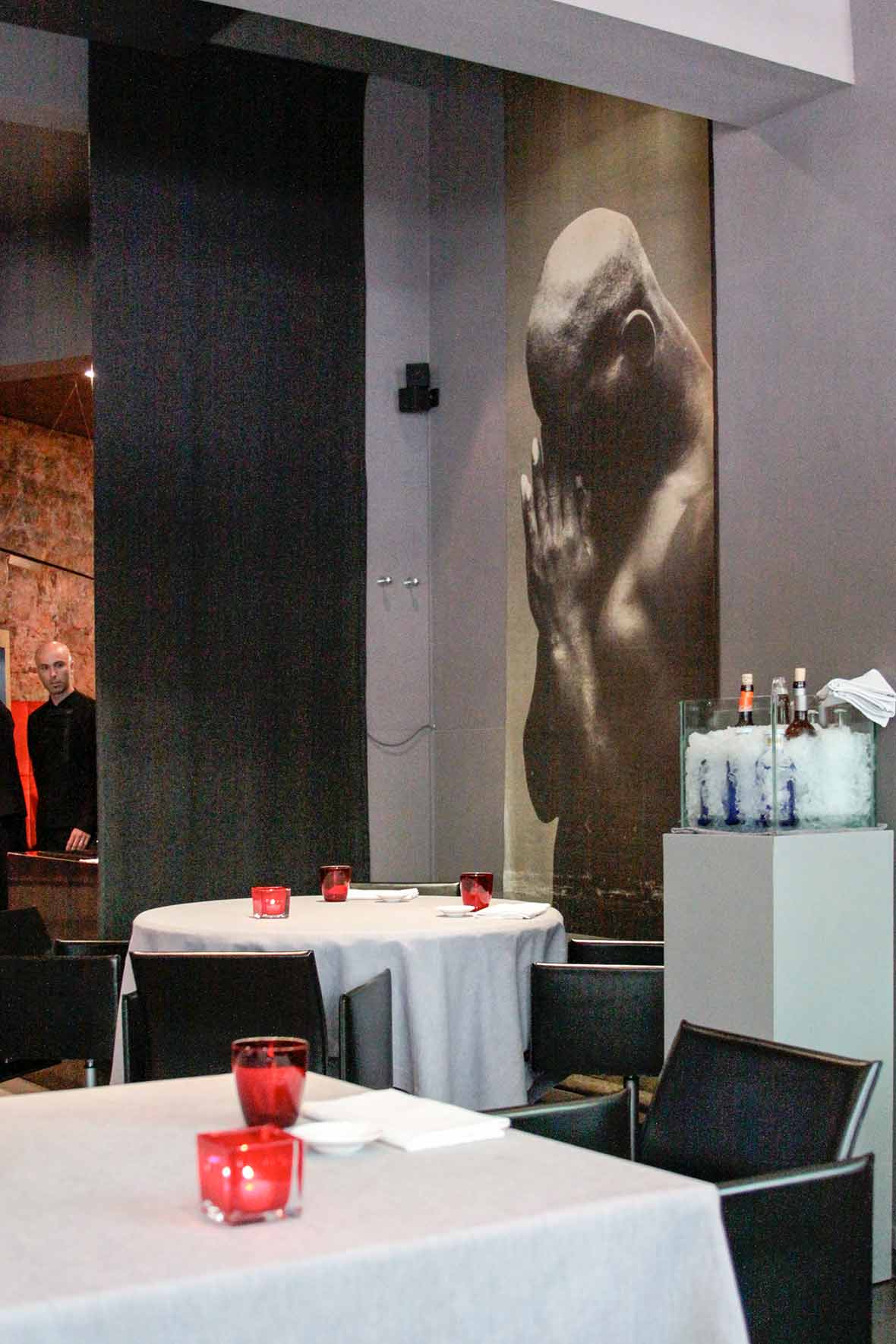 This article has been updated. Originally posted August 11, 2010.

As the The One and I touched down in Barcelona after that inhumane flight on Lufthansa, the worst airline I’ve ever flown, we were indeed ready to shrug off the cramped seats, terse personnel, and wailing infants and dig in to the dining scene. I had a list of restaurants given to me by everyone from Amanda Hesser to Anya von Bremzen to a friend of Mark Bittman. I wasn’t messing around.

But you know how they say that if you want to make God laugh, make plans? Well, if you want to see him roll on the floor in fits of hysteria, make travel arrangements with me.

Within a 48-hour period in Barcelona, a colossal demonstration for Catalonian independence, the likes of which hasn’t been seen since 1984, coincided with Spain’s magisterial win of the World Cup, clogging every restaurant and tapas joint with enough people and smoke to cause a panic attack. Then, thanks to lingering tourists who decided to extend their stay in Barcelona, restaurants suddenly had capricious schedules, opening when they were supposed to be closed, closing when they were supposed to be opened.

But owing to my newly acquired maturity from turning 50 (just ask AARP, which has inundated me with pleas for membership) and The One’s sotto voce requests that I not overreact once again, we wended, cajoled, sweet-talked, and blasted our way through the city to have some of the best food we’ve had in years. Here are some of our favorite spots.

I’d been wanting to visit Comerç, 24 (top of post, Carrer Comerç, 24 | +34 93 319 21 02), headed up by chef Carles Abellan for quite some time. Over the years I’d heard good things about it, and I was curious to see if this longstanding restaurant (of almost a decade) was still in good standing. The One and I were urged to visit for lunch without a reservation by the concierge of Hotel Omm (a superb place), where we were staying. Save yourself the headache and make sure to book a table. We were lurking across the street on a bench in order to be the first diners inside the moment they unlocked the doors. Alas, in the time it took us to cross the street, six people slipped in. Manager Marc Martinez was coolly gracious but had to do some juggling to accommodate us. We were led through a primary-red and school-bus-yellow bar/resto with its open kitchen into a somber gray dining room punctuated with hits of red from water glasses. 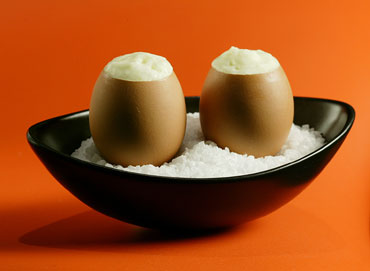 We had the Festival Menú, which included a copious number of courses with accompanying wines for 89 euros each; with water and extras, the bill was bumped up to 115. Overall the meal was quite good, but with some unexplained gaffs and overreliance upon certain ingredients. The biggest surprise was the inconsistency in seasoning: the tart, nearly clear Bangkok asparagus soup served with a phyllo cigar filled with a cream flavored with Parmigiano-Reggiano cheese, lemon, and basil was oversalted, as was the cube of salt cod napped with a hazelnut Romesco sauce. (It’s not true that salt cod should taste salty. Properly prepared cod has a clean flavor and firm, flaky texture.) Yet the sliced sirloin with white sesame paste was practically screaming for sea salt.

The menu was heavy with black and white sesame pastes, soy sauce, foie gras, and truffles, both black and white, all of which were good, but lent the meal a rich homogeneity—something we weren’t looking for. Cohesion is fine, but repetition can be dulling on the palate.

But still much shone. The One loved the sardine and orange salad seasoned with a bit of fresh wasabi and crushed carquinyolis, or almond biscuit. I was all over the duck rice, served with a quenelle of F.G. (fois gras). We also ordered the Kinder Egg, one of Abellan’s signature dishes: a lightly scrambled egg mixed with ultra-buttery puréed potatoes and truffle oil, all served back in its shell. Delicious comfort food with a sizable sticker shock.

The flight of five desserts was superb across the board. The winner was the toasted bread topped with bittersweet chocolate—softened from the warm toast—olive oil, and sea salt. A lemon sablée with pineapple curd and meringue was a sweet-tart sweetheart.

So has it stood the test of time? No, and yes. Abellan should keep a closer watch on his flagship restaurant (instead of, perhaps, hopscotching between his four other properties—his newest, 99% Moto Bar, was opening in a few days’ time) and focusing more closely on the food leaving his kitchen. That said, when the dishes worked, they soared.

Return Prospect: 80 percent
Tab Pain Threshold: Ouch, but not horribly painful.
Post-Nap Situation: We weren’t so full that we were out of it.
May I Help?: Service was very friendly and competent.
Rate-o-Meter: Some say it’s overrated, but there’s enough to still surprise. 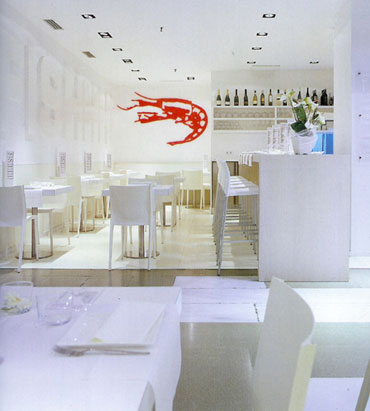 Speaking of surprises, one of the biggest was the pristinely white Fishhh! (Avinguda Diagonal, 557 | local 1-46 | +34 93 444 11 39). Call me a snob, but who would’ve imagined that a superb restaurant could be found in, of all places, a shopping mall? But there, on the lower level of L’illa Diagonal is one of the city’s must-eat-at spots.

Now, the lack of food shots has nothing to do with not bringing a camera. In fact, I was so ready and primed by Anya von Bremsen, who said the charming owners, chef Luis Enrique de Buen Maldonado and his life and business partner, expat Annette Abstoss, are the Catalan suppliers to the stars (he of fish, she of produce), that I even brought my Flip camera. But I never really got around to figuring out how to use it well, and I messed up most of the interview: I filmed Annette while Luis was speaking, focused way too closely on the food so it looked like a moody Manet painting, and generally muttered under my breath, which distorted the soundtrack. The only exception, happily, is Annette explaining the history and concept of the restaurant.

Not surprisingly, at its heart Fishhh! (the name is meant to imply speed, as in fast, good food) is an oyster bar and fish market—after all, Luis is the scion of the finest seafood wholesaler in the Boqueria, Barcelona’s famous market on La Rambla. Despite Luis’s pedigree, or because of it, his was some of the most startling yet simple food we had.

A radical, even heretical discovery we made is that Luis never cooks with salt.

“The seafood is extremely fresh and comes from the Mediterranean, which is very salty, so you don’t need it,” Annette said. Luis nodded, understanding, but not able to make his point in English.

Skeptical, The One and I reached for a plate of tiny fried oysters nestled back in their shells. I popped one into my mouth. First was a clean, brisk reassurance of freshness. “They were in the sea this morning,” said Annette, which was only six hours earlier. The sweetness of the oysters was balanced by a subtle brininess, and the delicate deep-fried batter crackled away, as if it were an afterthought.

We ate our way through fried calamari the size of a woman’s bangle bracelet and as tender as a ladyfinger, and platters of shrimp lollipops—skewers of deep-fried shrimp that were served poking out of white river stones from the Pyrenees, which Luis drilled himself. He then sheepishly slid onto the table another plate onto the table. It was his nod to Belgium: moules frites, AKA mussels with shoestring potatoes, alongside an homage to Ferran Adrià: an ice-cream cone’s swirl of mayonnaise foam. He stood back and watched the (expected) reaction. Amazement.

Hands down, though, the best dish I had in Barcelona (and that’s saying a lot because we had plenty of great dishes in the city) was razor clams sautéed in olive oil, tossed with pappardelle, and topped with pan-seared cherry tomatoes. It sounds deceptively simple, but it was bursting with a rich, oceanic, almost-buttery flavor, although Luis never used butter. The clams were sweet and so delicate I wonder what exactly were those rubber erasers masquerading as clams back home. The dish was a standout not just for its flavor but for the fact it was something Luis threw together to tide us over until the rest of the meal arrived. I urged him in my worst Spanish to please add it to his menu. “It’s a top tapa,” I said, nodding furiously, thinking that would make him understand me better. His face bloomed as if the sun were hitting it for the first time. He reached into his pocket for a pen and wrote on a napkin: TOP TAPA. Why did I have the feeling a new restaurant was soon to open with that name?

Keeping with the pristine theme of the restaurant, all the desserts were white—a conceit that didn’t always hit the mark. Being confined to only white food certainly limits options. What about berries, dark chocolate, and figs? Still, a winner was the über-simple warm bits of pan de coca, a flat, rustic bread similar to ciabatta, topped with softened feves of white chocolate and a sprinkling of sea salt. It was the yin to Comerç 24’s yang. And, personally, I preferred it. It was nuanced, and you almost had to stop everything, putting an end to all sensory input, to enjoy its subtlety.

We were the last to leave the restaurant. The other eateries in the lower level had long ago closed. Upstairs, the shopping center was shutting down. What niggled at my brain on the bus back to the hotel was that razor clam dish and the white chocolate bread. I refuse to let them haunt my reverie, and I’ll pass along the recipes—what little there is of them. I promise.

Return Prospect: 98 percent
Tab Pain Threshold: Hmm, surprisingly low. Average of 35 euros per person.
Post-Nap Situation: Although we ate and ate, I was ready to think about our next meal.
May I Help?: Service was very friendly and competent.
Rate-o-Meter: No hype here. It’s the real deal and it needs to be on more people’s eat itinerary.

You can’t miss with either.