A classic combination: blue cheese, bacon, and pear. But these burgers are inside out—the cheese hides inside the burgers. As the burgers cook, the cheese melts and bastes the beef. I’ve used sirloin, a more expensive cut than usual for burgers, but bear in mind, when you want to splurge on ingredients, sliders make swell party food. You can also make the burgers with lamb. I’ve mixed bacon into the burgers and used it as a garnish, too. Also, you can omit the grilled pear, or, if it’s perfectly ripe, use it raw.–Hubert Keller and Penelope Wisner

LC SOMETIMES SLIDERS ARE NOT WHAT YOU WANT NOTE

We’re all for sliders. On all sorts of occasions. Although sometimes sliders are not what you want. When that happens, just make bigger burgers—say, 8 or so behemoths as opposed to 24 wee sliders. 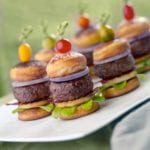 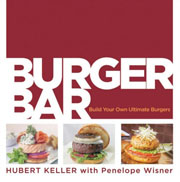