Cider-basted venison is a perfect recipe for those lean cuts of meat that need a little special treatment. Cider, black peppercorns, cinnamon, and orange zest all complement the sweetness of fresh venison.

The sharp edge of the air on a late fall evening can make even the nonhunter feel as if he has returned from a long tramp through the woods in pursuit—and ready to tuck into a venison meal. Using cider brings out the sweet tones in the venison and also amplifies the autumn mood of the meat. Here, we seal in some juices by browning the venison loin in a hot pan prior to putting it in the oven. Even so, the roast needs to be watched carefully. Venison is lean and just a few minutes of overcooking will result in a tough piece of meat.–Sam Beall

Venison’s lean, peppery character, says Blackberry Farm proprietor Sam Beall, is beautifully complemented by a Syrah. “We particularly like the Syrahs from a town in the northern Rhone called Côte Rôtie,” says Beall. “This region is a colder region for Syrah and produces more elegant and floral wine with a hint of black pepper that makes a fine counterpoint—and echo—for the venison.” We’re not arguing. 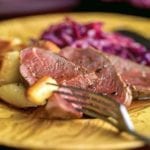 Venison loin steaks are served well by a quick baste with apple cider, black peppercorns, a generous dollop of butter, orange zest, and a touch of cinnamon. Be careful not to overcook this lean meat or it will dry out.
Prep 15 mins
Cook 25 mins
Total 40 mins
Mains
American
4 servings
135 kcal
5 from 1 vote
Print Recipe 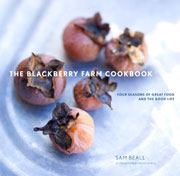 This cider-basted venison is fairly simple to prepare, yet it’s one of the best venison recipes I’ve tried. It took about 15 minutes longer than the required 25 minutes for the cider to reduce, but pan size could account for that. Keep in mind that the pan juices will thin the reduction somewhat as well. Although the pan glazing works well, you could also get away with grilling the steaks, then serving the cider reduction at the table. The recommendation of a nice Syrah is perfect as an accompaniment.

There was nothing to dislike about this recipe. The cider reduction coated and complemented the venison beautifully, and the cooking times produce a wonderfully rare piece of meat. I finished it in the pan, basting every minute, and turning the steaks halfway through to cook them evenly, yielding great results. It’s an absolute winner.

This is a great way to use venison that I hadn’t seen before! Some people may complain that venison is gamey, but this dish provides a hint of sweetness that pairs well with this “gamey” meat. Make sure you cook the reduction until it’s slightly syrupy; this will coat the loins beautifully. I served this with homemade rice pilaf and green beans from the garden. It made for a beautiful fall meal that wasn’t too challenging. This recipe takes some time, but is worth it!