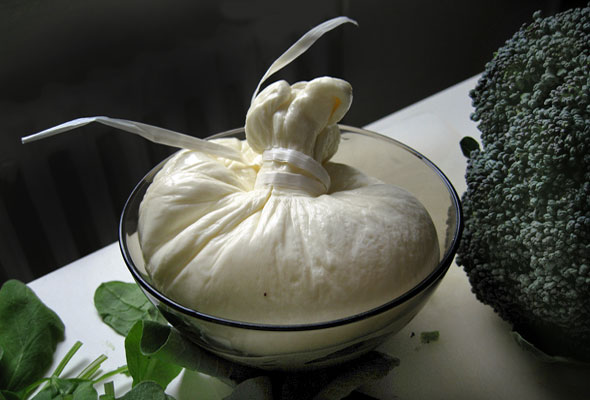 Reader Ronal Ellison requested that we provide some background and history for Puglia’s burrata, an über-trendy, decadent, cream-filled take on traditional mozzarella, at once a simple pleasure and an unctuous extravagance. While, as Mario Batali has often said, Parmigiano Reggiano is the “undisputed king of cheeses,” burrata is the undisputed queen. There’s even a Facebook page for burrata cheese with more than 6,000 devoted members, although, alas for many of us, it’s written entirely in Italian.

There’s curiously little on the subject of burrata cheese in English, with most mentions not much more than a few words in a restaurant review—although these mentions aren’t without merit. Firenze Osteria, in Los Angeles, features a fawning tribute to the cheese in three traditional appetizers: burrata with balsamic-marinated grilled vegetables, with prosciutto and melon, and as a twist on the classic Caprese salad. The Ritz-Carlton in Florida’s Key Biscayne combines the creamy cheese with blanched haricots verts tossed in a fruity olive oil. New York’s Dona takes a less traditional, more luxe route, melding caviar, sea urchin roe, and a purée of fava beans. San Francisco’s SPQR serves tortelloni stuffed with burrata and garnished with baby peas and mint. And at Phoenix’s Tapino, there exists an upscale last course of burrata with mascarpone and truffle honey, garnished with shaved white truffle.

As with other mozzarellas, burrata cheese owes its existence to the water buffalo (Bubalus bubalis), a large draft animal brought to Italy from its native Asia sometime in the 15th century. The milk of the water buffalo is richer and higher in protein than that of cows—which means more curds and less whey—although it lacks carotene, the yellow pigment found in cow’s milk. As a result, mozzarella di bufala is pure white. Originally all “mozzarella” was made with the milk of water buffaloes—and the best still is. In Italy, cow’s-milk mozzarella is distinguished by the legal name fior di latte, while most American mozzarella is now made from less-stellar cow’s milk.

Burrata cheese begins life like other mozzarellas, with rennet (usually animal-based) used to curdle the warm milk. Whereas for fresh mozzarella the curds are plunged into hot whey or lightly salted water, kneaded, pulled to develop the familiar stretchy strings (pasta filata), and then shaped into whatever forms, during the making of burrata the still-hot cheese is instead formed into a pouch which is filled with scraps of leftover mozzarella and topped off with fresh, rich cream, called panna. Burrata is traditionally, but not always, wrapped in leaves of asphodel (yes, these are the lilies that Alexander Pope said bloomed “in ever-flowing meads” in Homer’s Elysian fields, and should still be green when you serve the cheese, an indicator of the cheese’s freshness). The pouches are tied, each with its own little brioche-like topknot. The cheese is then moistened with a little whey and, for the sake of convenience in these modern times, often placed in a polietilene, or a plastic bag.

When burrata is sliced open, the luxuriously thickened panna flows out. It has a wonderfully rich, buttery flavor yet retains a fresh milkiness, and is best when consumed within 24 hours, and certainly within 48 hours, of being fashioned. Consequently, it’s only in recent years that burrata has traveled outside of Andria, let alone its native Apulia, save for rare exception (the Shah of Iran used to fly it in for special occasions). If you haven’t tried it, you really ought.

This unconscionably decadent cheese was first hand-crafted around 1920 on the Bianchini farm in the town of Andria, situated about two-thirds of the way up Italy’s heel to the spur of Apulia. In the 1950s, a number of local cheese factories began producing it, making burrata somewhat more widely available. At least one native of the region suspects that factories were interested in it because it was a way to utilize the ritagli (“scraps” or “rags”), which refers to the little bits that are left when cheeses are trimmed to uniform size. (There are leftover scraps in large-scale operations; when formed by hand, burrata doesn’t incur much waste.)

Yet even after burrata was being manufactured along a 130-kilometer stretch of Puglia from Andria to Bari, Gioia del Colle, Modugno, and all the way to Martina Franca (that’s about the equivalent of 80 miles, for those not familiar with the metric system), it managed to retain its premium-product status.

Very often, for Italians, dishes from the next town are “foreign food.” In Lecce, just 60 miles below Martina Franca, burrata is as foreign as brie. Burrata may be better known in the United States than it is in parts of Italy outside the area in which it’s produced. In fact, there’s now a producer of high-quality burrata in the United States: the Gioia Cheese Company, owned and operated by Vito Girardy, a native of Bari who opened the California factory in 1992.

Food historian Nancy Harmon Jenkins suggests that burrata may be an “invented tradition,” much like how corned beef and cabbage is considered a traditional Irish dish but is only served in Ireland because American tourists expect it. This theory may lend a clue to the relative scarcity of reliable information about burrata. The cheese’s reputation as an artisanal treasure—conjuring bucolic images of family farms in unspoiled Italy—might be diminished by mentioning an association with factories. This may seem trivial considering how delicious these cheeses actually are, but much of our appreciation of the foods we enjoy is based on what we imagine about them, and marketers are very reluctant to allow facts to interfere with what we think we know about the foods we love. Since anyone who has experienced burrata di Andria immediately recognizes the eminence of “La Regina dei Formaggi,” why quibble about mere facts, especially in the presence of nobility?

While there’s nothing quite like eating burrata with nothing more than a drizzle of olive oil, a sprinkling of sea salt, and a few grinds of black pepper, you can enjoy it in a Caprese salad, on an eggplant sandwich, and even on a simple pizza.—LC eds.

Acknowledgements, References, and a Source for Burrata Cheese

This article could not have been written without the much-appreciated assistance of Nancy Harmon Jenkins, Janice Mancuso, and Clifford Wright—molto grazie a tutti.