Maple oat waffles are a hearty and healthy breakfast treat. Crisp on the outside and flavored with maple, they’re a little more substantial than your run-of-the-mill waffles but they’re also far more satisfying and filling.

Oats and maple syrup are a natural breakfast combination. Here the syrup is stirred into the batter and used in place of sugar, and two grades of oats—bran and flour—are used. The oat bran is soaked in warm milk to soften before being stirred into the batter. After the batter is stirred together, egg whites are whipped separately and then folded into the thick batter to lend the resulting waffles loft and tenderness. One thing that’s crucial to the success here, even more so than in other waffle recipes—is to butter the waffle iron generously, as a crisp crust really makes the difference with these waffles.–Kim Boyce

CAN I REHEAT FROZEN WAFFLES?

While these aren’t your average light and airy toaster waffles, they do have the benefit of being healthier and more filling. Seriously, these are going to help you get through a morning at work or school, whereas those delicate little waffles? Not so much. If you can imagine yourself eating a better breakfast on busy days, make a double batch of waffles on the weekend, plate some for breakfast, and tuck the cooled leftover waffles into sandwich-size resealable bags, slide them into a larger resealable plastic bag, and toss in the freezer. And there you go. Your very own toaster waffles. 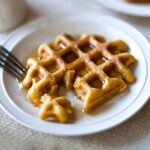 Oats and maple syrup are a natural breakfast combination. Here the syrup is stirred into the batter and used in place of sugar, and two grades of oats—bran and flour—are used. One thing that’s crucial to the success here, even more so than in other waffle recipes—is to butter the waffle iron generously, as a crisp crust really makes the difference with these waffles.
Prep 15 mins
Cook 15 mins
Total 30 mins
Breakfast
American
12 waffles
255 kcal
5 from 1 vote
Print Recipe 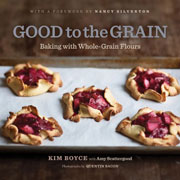 I like the idea of using oat bran and oat flour to add extra wholesomeness to these waffles. This recipe worked really well. As the waffles were cooking, my kids said, "Oooh, it smells like cookies!" and it really did. The waffles tasted just as good as they smelled.

I tried one topped with maple yogurt and another with some raspberry jam. The kids and the spouse opted for butter and maple syrup. The maple syrup in the batter gave the waffles great flavor. The recipe made a LOT of waffles but that's okay because they freeze well and make a great weekday breakfast when you just pop them in the toaster.

This is a nice, hearty waffle that keeps you going for the whole morning. It’s only lightly sweet, so I enjoyed it with some butter and a little extra maple syrup. It’d be great with berries or peaches, too. I had some extra waffles and really enjoyed them heated up in the toaster the next day.