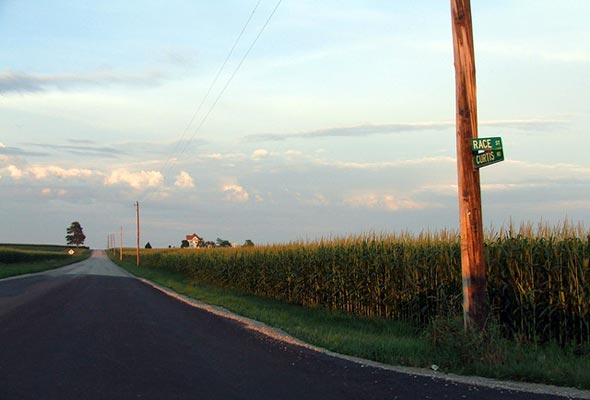 Sex is good. But not as good as fresh sweet corn.

How I wish I’d been the one to first state that sentiment, but it was Garrison Keillor whose muse whispered it in his ear. Considering I’m a newlywed, I’m a little ashamed to confess I feel the same, so I’ll simply say that corn on the cob has that effect on people from Iowa.

Still, there are times when it’s tempting to step out on sweet corn.

Each summer there comes a moment when, regrettably, late-season corn loses a little of its luster. It has for as long as I can remember. The corn of my childhood was ample, grown in fields situated a mere 20-second sprint from our porch. Evenings at dusk my brother and I would sit on the back steps and lazily shuck to the mesmerizing drone of cicadas. Minutes after it was picked, we’d lug the corn, sans husks and silks, inside to the waiting pot of boiling water. Then we’d do what most folks do. Which is to say, we ate it straight off the cob. Every single night. A simple ritual that invoked nothing more than salt and sometimes butter yet satiated far more than just our palates. It was perfect. Until sometime in early September. That’s when my sweet corn malaise would set in.

Still does. I swear it’s got nothing to do with me being lulled into complacency by prior abundance. Nor has anything else at the local greenmarket usurped any of my affection. (What, like kabocha squash? Please.) Late-season sweet corn simply has a propensity to be somewhat starchy. One day it will be milky and wildly sweet, the next it’s crushingly, disappointingly bland. Blame it on the vagaries of the earth’s biorhythms.

That doesn’t mean I don’t succumb to its lure, lugging home armfuls this time of year, delusioned and about to be disappointed. I just can’t help myself. As a result, I’ve managed to come up with some coping mechanisms for sweet corn that’s more starchy than sweet, born of necessity, yet, but also the respectful understanding that even deep within tough, unyielding kernels resides an innate corniness. And unlike early corn that just flings its essence at us, with late corn it’s up to the home cook to tease it out.

So say hello to corn off the cob. Lopped off with a sharp knife, even ho-hum kernels take on new potential. I’m not talking about cooking the corn on the cob and then slicing it off. This is a nifty, if not exactly innovative, trick—but it has no business here. It’s best reserved for height-of-the-season corn that’s still insanely sweet and requires only the slightest, if any, embellishment. What I mean is corn taken off the cob prior to cooking and them lent some oomph via being quickly roasted, grilled, or sautéed. That’s when late-season sweet corn can be revelatory. The sugars caramelize, the exterior crisps, there’s even an audible pop. It’s the soft-porn equivalent of corn nuts.

See for yourself. Mostly I just sort of ad hoc what comes next seeing as what comes out of the oven or the skillet is surprisingly versatile. An extra glug of olive oil is always nice, as are quite a lot of things. I mean, here’s where I could blather on about the embellishments I tend to turn to, whether out of practice or whimsy, but being just a bit voyeuristic, I’d rather hear how you fancy your late-season corn off the cob, given your druthers. Care to share?

Off the cob and onto the baking sheet

Carefully slice the kernels from the cob and strew them on a baking sheet. Drizzle with a scant amount of olive oil, toss well, and rattle the corn kernels into an even layer. Place the baking sheet in a hot, hot, hot oven (anywhere from 400 degrees on upwards), shaking the sheet occasionally, and cook until the corn is sizzling just a little. You decide whether to yank the sheet from the heat when the corn is just slightly tinged with brown or to wait until it pops and chars a bit. This takes 5 to 10 minutes or so. Watch it carefully. Drizzle the corn with additional olive oil. Finish with a shake of salt and pepper.

Off the cob and into the skillet

Slice the kernels from the cob and into a skillet, preferably cast-iron. Toss in some kernels and not a lot of butter or olive oil over mediumish heat and let it cook a little, stirring only if you must. It’s up to you whether you pull the skillet from the heat when the corn is just slightly burnished at the edges or you wait until it actually audibly pops and chars slightly, typically 8 minutes or so. Embellish with salt and pepper, if you please.