This grilled duck breasts with roasted grapes recipe includes a potato-bacon gratin and is from famed L.A. chef Suzanne Goin.

If you’ve never had grilled duck breasts, you’re in for a revelatory surprise. The contrasts are striking: the smoke of the grill against the richness of the duck fat, the juicy meat capped by crispy skin. At the restaurant, we buy Liberty Farms breasts, which I have found superior to others in taste and texture. They raise a variety of duck called Pekin, a smaller, more compact bird (a single breast is perfect for one person), with a brighter, more delicate flavor and feel. You may have more luck finding Muscovy duck breasts, which are heftier, more steak-like. If you use Muscovy, you’ll only need four breasts to feed six people.

Grilling duck breasts requires some attention. The fat from under the skin will inevitably drip into the fire, causing flare-ups, which can blacken the breasts if you’re not careful. If a flare-up occurs, use tongs to snatch the breasts off the grill for a few seconds, then return them once the flames have subsided. You may need to move the breasts around the grill almost continuously as the fat renders out. The reward for this vigilance, however, is perfection: crisp, golden-brown skin and plump, succulent meat. An easier option is to saute them in a cast-iron pan over medium-low heat, still skin side down, taking your time to render the fat from under the skin. Once the skin is crisp, which can take longer than you might expect, turn the breast over and cook a few more minutes, until medium-rare.–Suzanne Goin

Chef Suzanne Goin suggests you marinate the duck overnight, make the gratin in the morning, then reheat the gratin while the ducks are on the grill. Works for us. 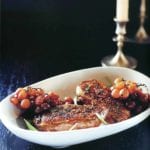 If you've never had grilled duck breasts, you're in for a revelatory surprise. The contrasts are striking: the smoke of the grill against the richness of the duck fat, the juicy meat capped by crispy skin.
Suzanne Goin
Prep 1 hr
Cook 2 hrs 15 mins
Total 3 hrs 15 mins
Mains
American
6 servings
701 kcal
5 from 1 vote
Print Recipe

For the grilled duck breasts