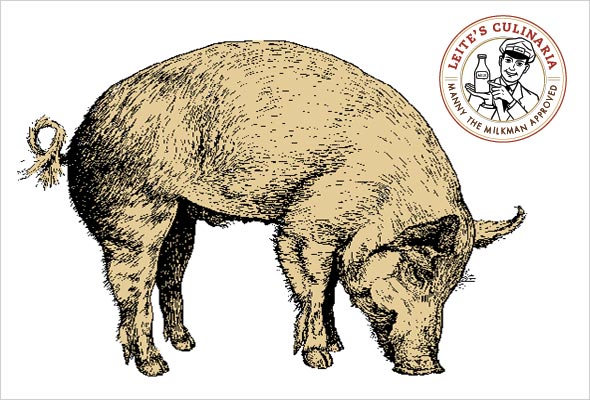 Lard was a really large part of my lexicon as a child. I still recall running errands as a 4-year-old with my grandmother and as we left the local butcher shop, she’d grab me with one hand, a two-gallon plastic bucket of lard with the other. Grandma embraced a rather reckless use of pork fat, and she wasn’t afraid to flaunt this fact. (Pig tends to have that effect on people from Iowa.)

It seems to have a similar effect on people from the Berkshires, or at least the good folks at the much-ballyhooed Flying Pigs Farm. What’s old is new again there. Rare heritage breeds of pigs lead the cushy lives pigs were intended, snorting and grunting around fields and woods. And when it comes time to, well, you-know-what the pigs, lard is an inevitable and enviable byproduct. My grandmother probably paid less for her entire two-gallon bucket than I pay for a single 8-ounce tub. But there’s lard, and then there’s lard. The lard of my childhood got the job done. But Flying Pigs Farm lard makes me go weak in the knees. It’s pristine, impossibly perfect leaf lard, rendered from the plump area surrounding the kidneys, that lends pie crusts an uncanny flakiness and the merest suggestion of smokiness. Thanks to Michael Yezzi and Jennifer Small, owners of Flying Pigs Farm, lard is still a large part of my lexicon.

Flying Pigs Farm’s rendered leaf lard is available for $6.25 per 8-ounce tub at Union Square Greenmarket (Manhattan, Saturdays, 8 a.m. to 4 p.m.) and Grand Army Plaza Greenmarket in Brooklyn (Saturdays, 8 a.m. to 2 p.m.). It’s best to arrive early if you expect to snag a tub. It’s also available by mail-order all hours of the day and night from its website. (Sorry out-of-state residents, their rendered leaf lard is sold only New York; you can still acquire pig fat from them, but you’ll have to render the lard yourself via their easy-to-follow instructions. Should you not have the time or the inclination to roll out your own pie crust, Flying Pigs can furnish you with their own made-from-scratch version. At about $10 for a double pie crust, it’s a bargain, though not by my grandma’s standards.)

I tend to reserve my precious and pricey leaf lard for pie crusts, but if I had a two-gallon bucket of it to get through, here’s what I’d be fixing to make:

Renee Schettler Rossi is the editor in chief of Leite's Culinaria. She has spent the past 15 years as an editor and writer at national newspapers and magazines, including The Washington Post food section, Real Simple, and Martha Stewart Living. Her work has garnered recognition from NPR, the Association of Food Journalists, and The Best American Recipes cookbook series, and she has served as a judge for the James Beard Awards.