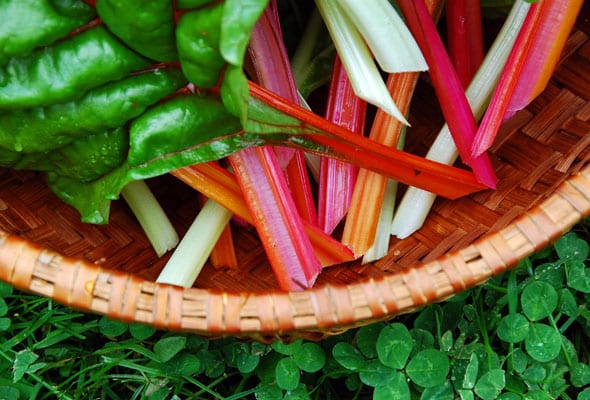 I’ve been indulging in rather rude behavior as of late. Not general impoliteness, mind you, but rudeness of a very specific sort. It goes something like this: I’ll be walking somewhere along the streets of New York with someone who’s telling me something and then mid-sentence, without warning, I’ll just meander away.

It started with a pair of ruby patent heels sitting oh so pretty in the window of a boutique shaded by the trees lining the Upper West Side street. Then it was the faux leopard coat with a ’50s blue lining that practically leapt out at me when we ducked into a store to do some clothes shopping for E. And, lately, as I stroll amid Union Square greenmarket, it’s the crates of rakishly handsome Technicolor Swiss chard that call out to me.

Those rakish leaves with their frilly edges and streaks of color are lovely, although it’s their stems that undo me. Look at them. Each is a distillation of the hue that pulses through the plant. Some stalks are streaked with hints of color, while others are saturated through and through. There’s palest yellow, fire-engine red, a pink-tinged amethyst of sorts that seems nature’s answer to hot pink, and, on occasion, a curiously two-toned stem that ostentatiously flaunts an earthy burnt sienna on one side, a somewhat more psychedelic shade of the same on the flip. Each color along the progressive spectrum has a flavor gradient to match. On a good day, some are sweet as candy. Others are almost unpalatably bitter. You can make an educated guess, but you never truly know what you’re going to get until you taste it.

That nature can will into existence something so stunning, and of such uncommon elegance, baffles me, as anyone who’s witnessed me standing there, lingering, can attest. While these moments may be an exercise in frustration for E, they’re one of restraint for me. With no two bunches alike, I covet the lot of them but I’m left to discern whether I’m in the mood for crimson chard as opposed to mustard yellow, or maybe a more uncharacteristic plain white chard, or that hearty shade of orange that was uncommonly lovely last week. I usually end up buying both bouquets, sometimes more. Why not? At $2.50 a bunch, it’s a more affordable fetish than anything else I see on the streets of Manhattan that I covet.

What to do with the abundance of chard that tends to accumulate in my fridge is simple. Throughout summer and early autumn, I mostly chop the jewel-tone leaves and stems and toss them with salads, lending sturdiness to an otherwise delicate mix of mache, mizuna, tat soi, and herbs. Some nights I can’t even be bothered to do that, instead drizzling the leaves and stems with indecent amounts of olive oil right there on the cutting board, in front of god and E and everyone. Untouched by heat, the deep crimsons and mustard yellows of chard remain vibrant and fail to fade, and, in sharp contrast to most vegetables’ one-dimensional nature, there exists an uncanny contrast between the tender leaves and the divine crunch of those lovely stems.

Come cooler weather, the parchment-like leaves’ days are numbered in gardens and greenmarkets, and in the days that follow what we’re left with is incomparably bland, tough, thick-stemmed, bunches in grocery stores trucked in from lord knows where. They may still beckon, at least at first glance, but they’re no replacement for local chard. They’re a proxy. As such, they require a little easing into. So I rely on a technique I took up years ago. Quite simply, I roast the Swiss chard. In the oven. It’s not as daring as it sounds. And it works quite well, whether you wish to just take the edge off the veggie’s rawness or turn the veggie brittle and pleasantly bitter as with kale chips.

I’ve toyed with more traditional treatments for chard come winter, when I’m desperate for those vibrant stems but need to bolster their flavor. Like that classic with the boozy plumped raisins and toasted pine nuts (though I confess to preferring walnuts in place of the pine nuts), which can be lovely. It’s no mid-summer baby chard, there’s no question of that. But therein lies the beauty of chard—or at least, a small part of it. It’s so damn accommodating. One could even call it polite. As for me, uh, I’m still working on that politeness thing.