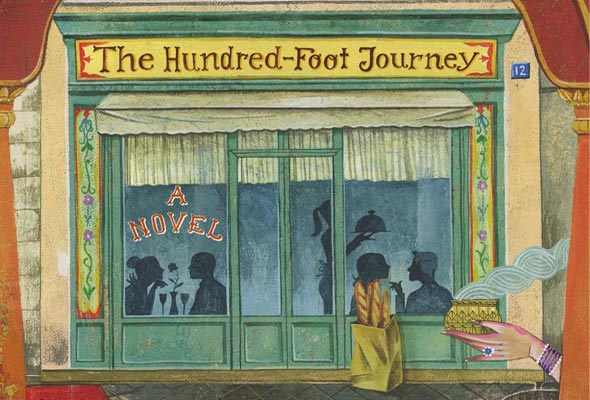 My first real sighting of Madame Mallory was perhaps a week or two after we had moved in. I was strolling through the headstones of the neighboring cemetery, furtively smoking a cigarette, when by chance I glanced over at Le Saule Pleureur. I instantly spotted Madame Mallory on her knees, bent over her rock garden, gloves and spade in hand, humming to herself. The damp stones to her left were warming up under the surprisingly strong morning sun, and trails of steam rose from the rocks, disappearing in the air.

Behind the chef stood the glorious granite slabs of the Alps, bottle green pine forests broken by patches of pasture and hardy cows grazing. Madame Mallory pulled her weeds vigorously, as if it were some satisfying form of therapy, and I could hear, even from where I stood, the violent sound of tearing roots. But I also saw, in the softness of her round face, the woman was calm and at peace tending to her corner of earth.

Right then the stable door across the road slammed open with a mighty bang. Papa and a roofer with a ladder suddenly emerged from the door’s shadows and they hobbled over to the front of the house. The roofer secured the ladder against the guttering while Papa roared, waddled back and forth across the courtyard in his armpit-stained kurta, and by sheer heckling backseat-drove the poor roofer up the ladder.

The tranquility of the Jura was shattered. Madame Mallory wrenched her head sideways, her eyes rooted on Papa. She was squinting under the straw garden hat, her liver-colored lips pressed tightly together. I could see she was both horrified and strangely mesmerized by Papa’s grotesque size and vulgarity. But the moment passed. Mallory lowered her eyes and pulled off her canvas gloves. Her quiet gardening moment was ruined, and, clutching her basket, she wearily climbed back up the stone steps to the inn.

Her back was to the street when she hesitated after unlocking the front door, just as a particularly virulent burst of Papa’s roars rolled across the forecourt. From where I was standing, off to the side, I saw the look on her face as she paused before her door—the lips pursed in utter disgust, the face a mask of icy disdain. It was a look that I would see many times again as I made my way through France in the coming years—a uniquely Gallic look of nuclear contempt for one’s inferiors—but I will never forget the first time I saw it.

Then, bang, the slam of the door.

The family discovered the local pain chemin de fer—rough and gnarled and tasty—and this “railroad” bread immediately became our new sauce-mopping favorite. Papa and Auntie were constantly asking me to pick up “just a few more” loaves at the boulangerie, and on one such foray, cutting back from the town center with the crusty bread wrapped in paper under my arm, through the back alleys where the wealthy watch merchants once kept their horses, I casually glanced over a stone-and-stucco wall.

It was, I quickly realized, the back view of Le Saule Pleureur. The small hotel’s garden was quite long and deep, almost a field, and it gently sloped down a hill to where I stood. The verdant property was filled with mature pear and apple trees, and against the far wall there stood a fruit-drying shed made of rough Lumière granite.

The boughs of the trees were bent with heavy brown Bosc pears, ready for the picking, and autumn bees were buzzing drunkenly around the sugar-filled fruit. But there were also tidy rows of boxed herbs under glass next to bow-shaped beds of wildflowers and patches for cabbages and rhubarb and carrots, all neatly embroidered by a flagstone path that ambled through the garden’s fertile plots.

Down at the bottom of the garden, a compost heap stood in the moist corner to the left, while an iron-and-copper tap in the shape of a nymph gurgled water into a heavy stone trough off to the right, next to a bench and yet another ancient and majestic willow tree.

I stopped in my tracks. Madame Mallory was again in her garden, this time up at the top of her field, just before it began to roll downhill. She sat upright at a long wooden table, next to who I assumed was one of her sous chefs, for both women wore peacoats over kitchen whites.

I could not, not at first, see their faces because both had their heads down as they worked briskly and professionally at the table filled with bowls and platters and utensils. But I could see there was something in Madame Mallory’s hand, which she promptly dropped into a bowl. Then, without pause, she reached down with her other hand into the rough wooden crate sitting on the flagstone between the two of them. From the crate, Mallory pulled what to me looked like a bizarre form of spiky hand grenade. I later discovered it was an artichoke.

I watched the famous chef expertly trim the vegetable’s leaves with a pair of scissors, the smart snips of her flashing tool ensuring each ragged leaf of the artichoke was symmetrically aligned and aesthetically pleasing to the eye, like she was tidying up after nature. She then picked up one of the lemons that had been cut in half, and doused each of the artichoke wounds—wherever she had snipped a leaf—with a generous squirt of lemon juice. Artichokes contain an acid, cynarin, and this neat trick, I later learned, prevented the sap-oozing leaves from discoloring the vegetable around its wound.

Next, Madame Mallory used a heavy and sharp knife to cleanly take off the top of the artichoke with a firm downward crunch of the blade. For a few seconds her head was down again, as she plucked some pink, immature leaves from the plant’s center. Picking up a new utensil, she cut at the inner artichoke and elegantly scooped out the thicket of thistle fuzz called the choke. You could see the satisfaction in her face when she finally and surgically removed the soft prize of the artichoke’s heart and set it aside in a bowl of marinade, already heaped with succulent and mushy cups.

It was a revelation. Never before had I seen a chef take such meticulous artistic care, particularly not with something as ugly as this vegetable.

St. Augustine’s bells chimed noon. The crate was almost empty, but the young sous chef at Chef Mallory’s side was trailing the older woman, not quite as quick as her maîtresse. Madame Mallory, studying her sous chef, abruptly held out the small knife she herself had been using and said, not unkindly, “Margaret, use the grapefruit knife. It’s a trick Maman taught me. The bent blade makes it much easier to remove the choke.”

There was something in Madame Mallory’s gravelly voice—not quite maternal, no, but still strongly suggestive of a kind of culinary noblesse oblige and duty to pass the techniques of the kitchen on to the next generation—and it was that inflection that instantly made me sit up.

As it did the young chef, who lifted her head, to gratefully take Madame Mallory’s grapefruit knife. “Merci, madame,” she said, in a voice that, as it wafted down to me with the wind, seemed redolent of fresh red berries and cream.

LC Read-Behind-the-Scenes Note: Drop in on this personal exchange between our managing editor, Allison, and Richard C. Morais, who shares some thoughts on chefs, impossible expectations, Portuguese cuisine, and nasty old goats.

Richard C. Morais was a senior editor at Forbes and the magazine's longest-serving foreign correspondent. An American raised in Switzerland, Morais has lived most of his life overseas, returning to the United States in 2003. He was stationed in London for seventeen years, where he was Forbes's European bureau chief. He now lives in Philadelphia with his wife and daughter. The Hundred-Foot Journey is his first novel.