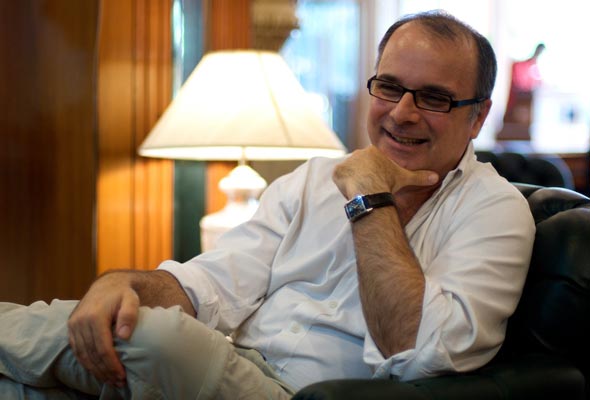 When the novel “The Hundred-Foot Journey” was published in the States approximately four years ago, our former managing editor, Allison Parker, chatted with author Richard C. Morais. For those interested in the book because of the recent film version, I’m featuring this interview from our archives.–David Leite

In Richard C. Morais’s debut novel, The Hundred-Foot Journey (Scribner, 2010), Hassan Haji, a scrawny Muslim boy from Mumbai, makes an excruciating journey to secure his fate. On the way, culture and destiny collide in the Jura and in the Michelin-starred kitchens of France. Measured in feet, meters, miles, or mettle, The Hundred-Foot Journey is about finding one’s calling. It’s about hunger, ambition, and what happens on the road to recognition. And, yes, it’s about food.

This book excerpt shows the exquisite longing and curiosity of the immigrant Hassan as he witnesses the authority, skill, and guarded tenderness of Chef Madame Mallory, owner of the celebrated inn and restaurant Le Saule Pleureur and self-appointed guardian of French culinary tradition. To accurately portray his characters, Mr. Morais explored both the foreign and the familiar, drawing on his many years of expat life in Europe, as well as gaining access to kitchens of international renown. Speaking from his current home in Philadelphia, Morais was gracious enough to take us behind the scenes of his novel and reveal some of his methods and memories—plus his passion for Portuguese food, clams, and pasta Bolognese.

Allison Parker: I have to say, I’m so taken with the way you layer the sensory experience of food with the themes in your book, especially the importance of food for the immigrant or expat. Your biography suggests you know a thing or two about that.

Richard C. Morais: Well, the first thing someone who is homesick will hunger for is food [from back home]. When you move abroad, the first few months there’s the adventure of it all. But when the monotony sets in, it’s the food you miss the most.

ACP: That’s interesting, because doesn’t your protagonist, Hassan, do the opposite? He immerses himself in the cuisine of his new country, France.

Richard C. Morais: Yes, but there’s that moment in Mumbai, when his mother takes him to the French restaurant. In some ways, Hassan is constantly trying to recreate that meal he has with his mother. That’s heightened in his memory bank. He has a calling that’s inexplicable. [His culinary path] is a defiance, but on the other hand, it’s a personal tale, which is why he’s eager to fulfill it.

ACP: Well, he does find a surrogate mother of sorts in Madame Mallory.

Richard C. Morais: The cliché with food writing is that it’s erotic—a kind of Tom Jones seduction scene over food. I wanted to do something different. There’s an older woman and a young chef, but it’s a love affair with the food.

ACP: Madame Mallory is such a strong character. Is she modeled after anyone you know?

Richard C. Morais: Madame Mallory was modeled a little bit on my W.A.S.P. grandmother. She was very formidable, with very high standards, and also a little unforgiving of others when they didn’t meet her impossible expectations. But she also had a spiritual side that softened her with age. Madame Mallory is probably drawn more from some of those severe, elderly Swiss women, like our landlady in Zurich, who loomed large in my Swiss upbringing.

ACP: Madame Mallory certainly sums up intolerance—of Hassan’s foreignness, of any mistakes in the kitchen. But she also recognizes talent and promotes it.

Richard C. Morais: It’s a double-edged sword, this symbiotic relationship between the chef and the second in command.

One of the more moving comments from a reader so far came from Chef Floyd Cardoz at Tabla. [Editor’s Note: Tabla is a Manhattan restaurant renowned for pioneering New Indian cuisine. It is, sadly, scheduled to close on Dec 30, 2010.] We got to talking, and he said, “This is my story. There are things about my own life… and they’re here verbatim, like I whispered it in your ear.”

That scene where Hassan tells one of his Parisian bosses that he’s going to create his own restaurant, and [the chef] starts throwing salamis and such? Floyd went through the same experience. Chefs are so dependent on the executors of their dishes—they have a love-hate relationship with them.

ACP: It does seem like you channeled that world completely in the book, despite many differences between yourself and Hassan—nationality, religion, occupation.

Richard C. Morais: I always wanted to be an actor. My route into fiction is acting. For a little while, I get to pretend I’m in another culture. It’s a fine balance—that first layer of stimulating the imagination, then doing enough research.

ACP: So is your writing process like method acting? Did you eat or cook more than usual while working on this book?

Richard C. Morais: I didn’t have to do more than normal. Food has always been my obsession. But I was looking for specific knowledge—those things in the book people think I made up. Like that scene in the Crawford Market in Mumbai. Michel Roux, the French chef in London, he mentioned the knees of the chicken. Or how you never wash mullet under a tap, you use a sponge to wash fish so you don’t rinse away the flavor.

ACP: But you did serve time in some celebrated kitchens—Khyber in India, The Sugar Club in London, and Le Bernardin in New York City. Did you get into any hot water while you were there?

Richard C. Morais: Well, I was in my reporting mode and only there for a few hours—except The Sugar Club. That was the only time I was actually cooking.

While living in London, a friend convinced me to visit Iceland in the fall and go ptarmigan hunting. That’s how I wrote about the Icelandic Christmas dish—the part in the book about cutting open the bird’s crop and removing the tundra herbs. I went hunting and ended up with six brace of—that’s a dozen—ptarmigan. I smuggled them into London and took them to The Sugar Club and said, “Let’s play around with these. I’ll invite some people.” We spent time in the kitchen and figured out how to do our own version.

ACP: What are some of your favorite dishes?

Richard C. Morais: My favorites are still from childhood. I did learn along the way—I’m always accumulating knowledge. I use some Indian spices now like cloves and cardamom that I never would have used before. But my comfort food still comes from my childhood.

ACP: Would you care to give an example?

Richard C. Morais: This summer I roasted a kid in my backyard in Philadelphia. I remember as a boy, when summering in Portugal, how my father and a friend of his dug a pit and roasted a goat. So, I had a hankering in my late forties to do the same thing.

In the States, if you see goat, you see it in stew, usually Caribbean-style. But it’s a nasty old goat, and that’s why it’s in stew. Kid is more delicious than lamb, if done right. I sew oranges and lemons into the stomach cavity, and it gets real crispy on the outside. You have to look for a milk-fed kid. That makes all the difference.

ACP: I think I heard you say Portugal.

Richard C. Morais: My father’s side is Portuguese. My great-grandfather owned a restaurant in Lisbon. I think Portuguese is the most underrated cuisine in Europe. It’s far more sophisticated than Spanish.

ACP: Well, I know David will be pleased to hear that.

Richard C. Morais: Tell him I’m getting his book!

ACP: I will. You can exchange books. What about your mother’s side of the family?

Richard C. Morais: My mother’s family were W.A.S.P. New Yorkers. Cooking was not a big factor in my mother’s upbringing. My father actually taught my mother how to cook the basic day-to-day dishes of my childhood. On this one dish, she outperformed my father: Pasta Bolognese, one of my comfort foods, which she’d cook when my father was away on business. All the men in my family are superb cooks.

ACP: So you do the cooking at home—when you’re not writing, that is?

Richard C. Morais: I’m a typical male. I show off when the guests come, but my wife does all the heavy lifting on a daily basis.

ACP: Someone at Scribner once asked you, “If you could only eat one thing for the rest of your days, what would it be?” You answered, “Clams.” Is that true?

Richard C. Morais: My recipe for clams is easy to make and absolutely gourmet. I make a version of sofrito with garlic, tomatoes, onions or leeks, or whatever I have lying around. Then come the clams, white wine. You cook it 20 minutes and have it with country bread.

ACP: It doesn’t get much better than that, does it?

Richard C. Morais: No, it doesn’t. And that’s also why Hassan goes back to what’s simple.

ACP: Simple, yes. Unlike writing such an elegant novel. What’s this process been like for you?

Richard C. Morais: I’m engaged in my own hundred-foot journey, searching for home and artistic fulfillment. I’m sitting in my room in Philadelphia, but I’m really in the market in France buying vegetables. That’s the great satisfaction I get from fiction writing. Hopefully, it will work out.

ACP: I’m sure it will. Thank you so much for taking the time to talk about the book.

© 2014 Allison Parker. All rights reserved. All materials used with permission.