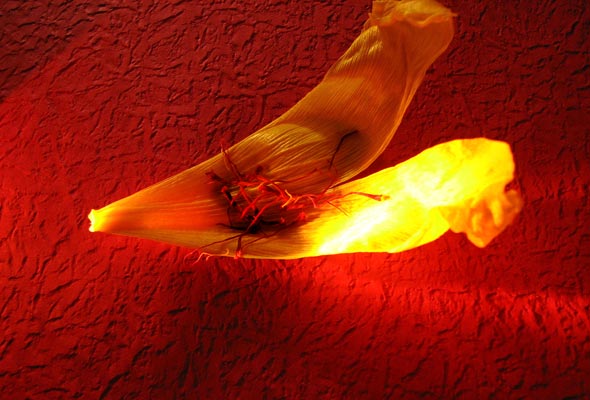 Cloaked in a bolt of royal blue cloth that revealed only a nose, a braided grey beard, and a pair of wrap-around sunglasses, the man I approached at my farmers’ market looked something like a modern-day executioner. I knew there was no rational reason for me to be nervous. Someone I had trusted had given me the hook-up to Washington-grown saffron. But I’d been expecting a hipster, not a hippie.

Surrounded by tables of baby succulents, the grower was busy discussing the particulars of a plant I’d never seen before with another customer. I lurked, observing how the guy’s hands were permanently creased with dirt, almost as though the hands themselves were half-plant. When he noticed me, I shyly asked if he knew who sold saffron. A bright, welcoming grin burst out from behind his hood and he opened his eagle arms wide. With no small drama, he swooped a hand under the table, brought out a small tackle box, and extracted a tiny cellophane envelope filled with abnormally long, red threads. I had to remind myself that what I was doing was perfectly legal. I took a deep breath. “How much?” I ask.

The Pacific Northwest, with its mild, wet climate that’s similar to that of southwest Asia where saffron originated, is actually home to a number of saffron producers, mostly on Washington’s Olympic peninsula. At the market where I shop every Sunday, Jim Robinson isn’t exactly known for saffron. His outfit, Phocas Farms, is mainly a succulent business—he’s the guy who grows really cute plants in rocks. He just happens to do saffron on the side. After I’d pocketed my little packet, I decided I had to know whether $30 per gram is a bargain for the amount of work saffron requires. So I asked.

Jim was quick to point out that this has not been a stellar year for saffron around here. He explained that there have been toads of biblical proportions, and while the amphibians aren’t harmful to crocuses per se, they do make excellent excavators. The situation had clearly inspired some contemplation on his part. “I find myself thinking about a possible twist on that old English classic Toad in the Hole, made with chorizo and topped with a saffron cream sauce…?” he said, clearly familiar with saffron’s Spanish accent. We arranged for a visit.

“Welcome to the shambles,” Jims boomed as I stepped out into the rain at Phocas Farms. The farm is, in his words, a decades-old work in progress. It’s a rambler deposited at the end of a dirt road, surrounded by what looked to be a sprawling study in succulent genetics with a ring of DIY deer fencing around the perimeter and a security force of not entirely domesticated cats.

It turns out Jim had an arroz con pollo habit back in the early ’80s. That’s how this all started. One day his wife, Kathy, coughed up enough cash for them to buy some good Spanish spice, but they decided to instead try growing their own as hobbyists. In 1984, Jim and Kathy ordered and planted 100 Crocus sativus corms. (A corm looks like a bulb and acts like a bulb but is botanically a bit different from a bulb. It serves the same purpose, though, acting as a winter storage unit for all of the plants’ unfinished business.) Sixteen long years later, the Robinsons started to sell saffron at farmers’ markets.

Jim is a man of a certain age: He’s old enough to have entered his anecdotage, but not so old that his tales are no longer interesting. Having spent most of his life gardening and farming, including a stint as an agricultural Peace Corps volunteer in Nepal, Jim thought he could easily handle picking flower stigmas from a crocus plant that blooms only for a few short weeks each year, after the traditional harvest season.

Still, Jim moves with unexpected agility among his crocus beds, gracefully dodging the meshing that keeps his cats from pawing at the dirt. Straddling a long row of plants, he looks like a bearded Bono gone botanical as he patiently begins the story of saffron’s growing cycle.

“She’s a backwards plant, from the bizarro plant kingdom,” he says in a slow surfer drawl lightly tainted with the Queen’s English. Translation: Under normal weather conditions, instead of first shooting up greens first and then flowers like most plants, C. sativus sends up its blooms and then follows with the rest of the plant. Those spindly green shoots covering the corm beds that I’d presumed were precursors to a good paella are actually the aftermath of the harvest.

“So where’s the saffron?” I ask. Jim points a yellow-stained finger to a crocus that’s about to flower. It’s shaped like a little lilac-colored torpedo, but unlike some of the smaller flowers, it has tips of red. “La rosa de saffron,” he announces. The rose of saffron does indeed look like a tiny rose, as if the flower bud itself is puckering up for a kiss. It clearly doesn’t realize it’s signaling to Jim that it should be destroyed immediately.

Watching Jim, I quickly learn that picking C. sativus is in no way an ambiguous process. He grasps each flower at its base, pushes down—we hear a small pop, which is the sound of the petals ripping off their base—then pulls up, taking the entire flower head off of its stem. Jim uses his fingers to roll the petals off one by one, revealing three skinny red threads whose tips only seconds ago formed the red spot above the blossom. I realize that we’re stripping the flower naked and I wonder for a moment if it minds.

I ask if I can pick one. Jim bristles, and I instantly know he’ll say no. He explains that because it’s been such a bad year, he has to be absolutely sure that each and every stigma gets dried into saffron. I try hard not to be insulted. My own anal-retentiveness has never actually been called into question, but I get it. The economic reality of a poor harvest means I stay standing.

“Do you think of yourself as a type A person?” I ask. He smiles. “I have to be precise to produce as good a product as I do,” says Jim. “So sure, maybe. I was born on Winter Solstice. But I’m more complex than that. Though born under a Capricorn sun, many traits of which are classically type A, my astrological predisposition towards intransigence was softened by having a moon in Gemini, an ascendant in Cancer, and the majority of my planets scattered among air signs.” One more mark for a subject I didn’t expect to cover with the saffron guy. We move on.

Another little detail in saffron cultivation is that you must pick the flower before it opens or wilts. An open flower begins to spit pollen onto the stigma, which taints the final product, and  a wilted flower compromises quality. So each day during the height of the season, which usually falls in late October, Jim picks about 1,500 flowers in the hours just after dawn. To ensure that he can process all this saffron in the short amount of time allotted, he turns to cutting-edge technology: an old almond-colored Whirlpool refrigerator. This is where he stashes the flowers to prevent wilting while the picking’s good. Only after he’s hauled all the flowers in can he start plucking the actual saffron threads out of each individual bloom.

Transforming the blood-red trifurcated stigma of the crocus plant into botanical gold is a simple enough process. Unlike some “crokers,” as saffron growers were once called in England, Jim only dries the reddest part of each stigma, breaking off the lighter orange or yellow style that connects the stigma to the flower, which is often used in lower-grade saffron. He arranges the blood-red stigma in rows on paper in his warm processing room—an odd space that’s one third kitchen, one third garage, and one third jury-rigged recovery room for his wife, who’s about to have a knee replacement—and lets them dry for two or three days. That’s it.

Only that’s not really it. By Jim’s count, an average day during high harvest requires four hours of crouching followed by about 12 hours of meticulous processing. Not counting weeding, mulching, soil prep, planting, and packaging, that averages out to about a minute per flower. That may not sound like much, but early next spring, try something. Walk outside and bend down to pick a crocus. Stand there for one entire minute halfway between crawling and walking with one hand on the ground, like a model for someone drawing one of those posters that shows the stages of human evolution. Unless you’ve played a lot of football, you’ll probably be happy to pay someone else to grow your saffron the next time you feel like making bouillabaisse.

Jim finally got around to explaining that a government-funded study in New Zealand concluded that the amount of labor required to produce saffron made it impractical as a crop in a first-world or industrialized society. “No surprise in that, eh?”

No surprise at all. But Jim isn’t exactly obsessed with practicality. He calls growing saffron his avocation—as opposed to his vocation, which is growing succulents—precisely because it’s a beast of a crop. The corms get eaten by all manner of bugs, slugs, and rodents (hence the cats), and they require careful feeding and fertilizing. Wet years, like this one, result in poor yields.

There’s no substantive evidence that Jim’s saffron smells sweeter than the little vial I brought home last year from Spain, or that it lends a more opulent yellow hue and a more intensely earthy taste to my cooking than the threads the other local growers sell. He’s never had it chemically analyzed for flavor and aroma compounds, as many producers do. He has no idea whether the levels of safranal, the oil that gives saffron its characteristic scent, in his product are off the charts or not. The fact that his saffron is relied on by well-respected Seattle-area restaurants, including The Herbfarm and Allium, is proof enough for him. And from what I observed, no one in his right mind would voluntarily straddle crocus beds in as awkward a position as Jim does, for as many hours as he does, if he wasn’t obsessed with growing the best saffron possible.

At home that night, I rip open my little dime bag. It contains a neat half gram, good for five, maybe ten dinner parties, depending on the dish. I crush a pinch of it in the palm of my hand. The threads smell like a mix of honey, hay, and hard work. That scent is the reason Jim’s cut back on the saffron use in his own kitchen in recent years, just like the Dutch curtailed their spice use once they figured out they liked world domination more than well-seasoned food. For some, saffron doesn’t taste that luxurious knowing that your money could be in your pocket instead of on your plate. (For the record, Dutch food has never recovered.)

Thankfully, I have no compunctions about polishing off Jim’s saffron. I slide some chorizo in the oven. I love Jim’s idea of topping a dish as old-school as Toad in the Hole with something so glitzy, partly because I’m curious, partly because of the whack factor. It’s an awfully raucous collision of cultures—English and Spanish cuisines are not habitual bedfellows—but it works. Although for a poor man’s dish, them’s some awfully spendy threads.