Bourbon milk punch is a less cloying, yet still creamy, version of traditional eggnog. The combination of milk and ice cream gives it a lovely milkshake-like quality, while a decent amount of bourbon makes it festively tasty.

Adapted from Albert W. A. Schmid | The Kentucky Bourbon Cookbook | The University Press of Kentucky, 2010

The origins of the defiantly un-egg noggy sipper known as bourbon milk punch seem as murky as the concoction itself. By the Middle Ages, a similarly boozy combo of milk and whiskey seems to have been quite the thing in the United Kingdom. Served hot, it was a variant on the hot toddy and was reputedly coveted for its medicinal virtues. Though said virtues—medicinal, uh huh—seem a little questionable, we can see how the sleep-inducing qualities of both warm milk and booze could be construed as restorative, as we’d definitely fake a cough to secure a pint of this sweetly mesmerizing punch. It goes down quite easily and, fittingly, is a year-round palate pleaser and sleep tonic in The Big Easy. Elsewhere in the South, folks tend to think of bourbon milk punch as a spirited Christmas drink, though as far as we’re concerned, it requires no special occasion.–Renee Schettler

Let’s be clear about one thing. Egg nog this is not. It’s less rich, not so cloying, lacks hard-and-fast rules about a shower of nutmeg, and doesn’t flirt with the potential for a nasty salmonella situation. As such, it’s eminently easier to quaff than nog. It’s a lot more like a milkshake. The only problem, as we see it, is ever returning to a straight-laced, teetotaling vanilla version. That, and achieving anything of import after starting to sip it. 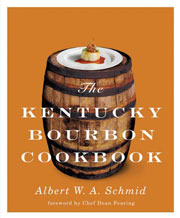 This is a nice alternative to the often too-rich and overly sweet eggnog of the holiday season. It’s also not a watered-down version of eggnog, which comes as a pleasant surprise. The ice cream does add a bit of richness without being too filling, while the nutmeg adds the traditional festive flavor associated with eggnog. The combination of the vanilla ice cream and extract seem to mellow the flavor of the bourbon. This would be wonderful served before a light holiday meal because it isn’t heavy enough to ruin your appetite. Next time, I will try adding just a dash of cinnamon, and possibly with a low-fat milk or reduced-fat ice cream to see how it turns out.

This is part boozy drink, part milkshake (but not as thick), and part holiday beverage (mostly due to the nutmeg garnish). Also, it’s quite dangerous. I kept taking little sips to taste here and there, then finally just poured myself a glass. It’s sweet and milky, creamy from the ice cream, and the bourbon is well-hidden. I drank half of it by myself, and then was completely useless to make an actual dinner. So drink sparingly if you’re actually in charge of cooking. Also, use more nutmeg in the actual drink instead of just as a garnish (about a teaspoon), and let it sit for a few minutes so it becomes more milky and less ice-creamy. If you make this with Ben & Jerry’s creme brulée ice cream, all you need to do is pour in the milk and bourbon—no added vanilla or sugar is needed!

This bourbon milk punch may just become my new Christmas drink! It’s not quite as thick as eggnog, but it’s a great alternative. There’s a nice, rich flavour from the vanilla coupled with the ice cream, and the milk tempers that richness, so it’s not too cloying. It took next to no time to whip up, even though I had to make this in two batches and stir both together into a large pitcher when done. You’d almost think the bourbon was nonexistent, except for the bit of headiness when you take a swig. The drink doesn’t suffer in the slightest if you omit the nutmeg, and I kind of prefer it that way. With the nutmeg though, you’d almost swear you were having “adult” eggnog.

Recipe © 2010 Albert W. A. Schmid and Dean Fearing. © 2010 All rights reserved. All materials used with permission.