Moghlai lamb with spinach is a hearty dish, filled with chunks of flavorful lamb shoulder, ribbons of spinach, crispy onions, and loads of garlic and ginger. Serve with fluffy naan or rice.

Adapted from Madhur Jaffrey | From Curries to Kebabs | Clarkson Potter, 2003

This classic Moghul lamb with spinach recipe is called paalag gosht. The only new ingredient that has been added over the centuries is probably cayenne pepper. The dish is also known as saag gosht. “Saag” could mean any green, whereas “paalag” is very specifically spinach. The spinach needs to be cut fairly small. To do this, hold a handful at a time in a tight wad and slice, crosswise, into fine strips.–Madhur Jaffrey

So Madhur Jaffrey recommends Indian breads on the side of her Moghul lamb, meaning a sort of flatbread such as naan or roti. We’re working on more recipes for those, but in the meantime, you could always swing by a local Indian foods store and pick up some frozen flatbread dough to keep in the freezer. Pillsbury even makes a version of them (we’ve only seen them in Indian markets to date), though we recommend sticking with a lesser-known Indian brand. Just, you know, for the sake of authenticity. 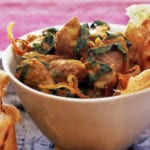 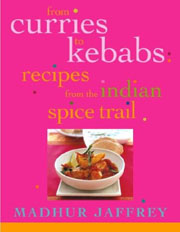 I made this recipe for Easter lunch as one of our guests is actually from the Southern part of India. I had to double the recipe due to the amount of people present, and all I can say is that unfortunately there are no leftovers. The preparation was very easy and all of the ingredients were very easy to find. I marinated the lamb for about 1 ½ hours and the actual prep time was very fast (it actually took about 20 minutes). The cooking time was spot on. The final dish consisted of the lamb cooked to tender perfection and enough of the smooth sauce to spoon over the white rice. This is a recipe that we will be making more often.