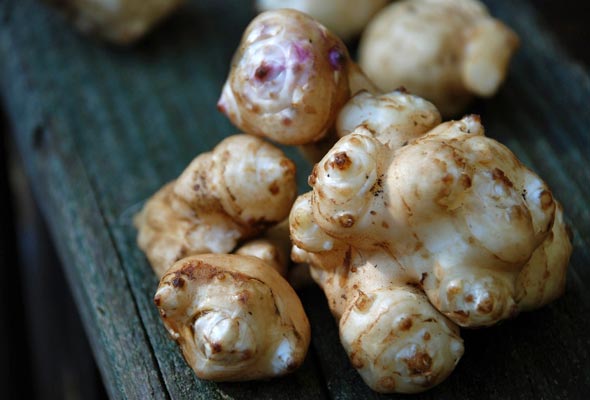 ‘Twas the day before Dinner for Pretty Special Guests. You know, one of those meals for which you concoct dozens of potential menus in your mind before finally, nervewrackingly, committing to just one. But rather than hurrying at the office through page proofs and e-mails so I could head home to tend to cleaning and chopping and Champagne chilling, I was sitting in my office staring at the lumpy sack of strange-looking tubers known as sunchokes plunked, quite unceremoniously, beneath my desk.

I’d swung by the greenmarket on my way to work that morning with the homely looking Helianthus tuberosus on my mind. I’d been flirting with these curious tubers since they’d shown up at the market several weeks prior, but they hadn’t exactly exuded much charm, not with their oddly knobby, dirty appearance that suggests a madcap cross-pollination science project—part potato, part ginger. Their confusing alias of Jerusalem artichoke, which has clung to the ‘chokes for decades despite the fact that they bear neither a relation to Jerusalem nor a resemblance to an artichoke, wasn’t very helpful in terms of explaining what they are.

I’d been seeking the perfect excuse to play with them, but not really knowing what to make of them—or with them, for that matter—I hadn’t summoned enough gumption to try them. Until now. I’d been thinking that a dinner party for folks with rather traditional predilections wouldn’t be satisfying without something at least a little potato-y. Piled up next to crates of russets and fingerlings, these tuberous things looked like potatoes. And the little handwritten sign at the market assured me that they behaved like potatoes. So I’d lingered a little that morning, sidling up to the chefs in their whites who were buying them by the bushel and soliciting their take on them. Then I crammed sunchoke after misshapen sunchoke into a bag before I could back out.

As I sat at my desk and stared, I pondered my chef-solicited options. Roasted. Mashed. Pickled. Pan-seared. Souped. I wanted something sufficiently traditional but sorta outlandish. Something to surprise my guests yet not alarm them. Something that wouldn’t upstage everything else. Something simple. So I did the only thing I could think to do. I emailed the only person whose palate I truly trust. And that would be Pulitzer prize-winning food critic, Jonathan Gold.

Turns out he’d already colored outside those exact same lines this past Thanksgiving. We bantered about the relative merits of slicing the knobby things or leaving them whole, tossing them with nothing more than olive oil or indulging them in a bath of duck fat, subjecting them to the blast of a hot oven or a more temperate romp on the stovetop. Then he offered perhaps the most critical part of sunchoke cookery: not to even bother peeling the knobby little suckers (and half of your knuckles along with them). Just wait, he said. The skins turn thin and crisp, crunchy even, after cooking, such that you can slip them right off. (You can, he continued, also peel them using the old truc for ginger, scraping the skin off with the tip of a spoon.) Decision made, I thanked my him profusely, then plodded through my page proofs, grabbed my potato-wannabes, and practically danced home.

They were lovely, that initial batch. The skins turned to shatteringly crisp parchment while the interior puffed like little pommes duchesse. The heat rendered them crisp outside, tender within, and intriguingly sweet throughout, just as I’d been assured. That was three years ago, yet I still remember that side dish like it was last night’s supper.

Since then, I’ve come to have quite a chummy relationship with sunchokes, deviating somewhat from that initial foolproof technique and succumbing to all manner of temptations. Steamed. Sautéed. Souped. Crisped. Even shaved raw atop salads. They’re so darn similar to potatoes, yet something in the innate tuberosity of sunchokes makes them moister, sweeter, better able to inflate like jumbo marshmallows over a campfire. But let’s be clear about one thing. It’s roasting that’s my preferred approach, the one I keep coming back to. It’s worth noting, I’ve never once bothered to remove their skins before cooking.

As with most greenmarket finds, sunchokes have a season. They’re amply available during cooler months, and rather maddeningly elusive to find at all other times. (I know what you’re thinking. But you can forget about stockpiling them. They don’t keep particularly well, and they’re definitely not as swell as potatoes. For some of us, the absence makes us a little sad when spring eventually comes around. Sunchokes tend to have that kind of effect on people.

[Editor’s Note: Sunchokes can have another type of effect on some people, one that’s a little trickier to romanticize. It tends to happen to those with delicate constitutions, and it’s often indelicately described as creating a troubling rumbling in one’s belly. When consumed in modest measure, there’s rarely any ill effect. The problem is, when trying them for the first time, most folks know no moderation. While I may have perfected my cooking techniques, I’ve yet to comprehend how to gracefully caution guests at the table when sunchokes are on the menu. So I’ve refrained from sharing them since that night, instead relegating sunchokes to weeknight suppers just for me here and there. Ought I to lose my girlish bashfulness and introduce others to their charms? Is it worth it? You tell me.]