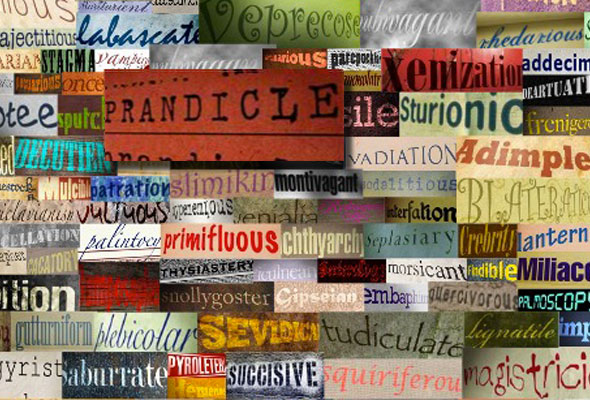 I overslept this morning. As soon as I opened my eyes at 10:17 a.m., I remembered the deadline for the piece I’m writing about French brandy was looming over me like a guillotine, the handout for the cocktail seminar I’m teaching later this week has yet to be assembled, and the substantial edits to my novel are due next Monday. I scrambled to the desk in my home office, skipping my usual fried-egg sandwich breakfast and bypassing any attempts at grooming. With not a moment to lose, I logged onto Facebook.

A newly posted comment from my friend Toni, a writer, stopped me in my tracks: “I love this so much it hurts.” Surprisingly, the link she shared wasn’t to a tantalizing recipe, an astonishing news story, or even a viral video. It was to the rather painfully practical Oxford English Dictionary (OED). The thumbnail image next to the URL was too tiny to make out, but it looked a lot to me like a patchwork quilt. It was 10:19 a.m. What was another 30 seconds? I clicked.

A smaller window popped open, framing a quadrant of the page with the cryptic heading “Save the Words,” while the “quilt” expanded to fill the entire screen. There were words everywhere: Big ones. Small ones. Acid-yellow block-caps ones jammed up against elegant sepia curlicue ones. Aquamarine LED display characters crowded out letters scrawled in blue ballpoint pen. In an effort to get my bearings, I did what I always reflexively do: I wiggled my computer mouse. “Help! Pick me!” chirped a tiny voice from my desktop speakers. I kid you not—I know it may sound strange, but the high-pitched plea was coming from the unfamiliar black typewritten word I’d inadvertently moused over: PRANDICLE. What kind of lexicographical rabbit hole had I just fallen down?

A couple more clicks revealed that this multicolored, multi-fonted patchwork of talking words is part of a brilliant marketing campaign, an attempt by the bookish folks at the OED to encourage readers to “adopt” a near-obsolete word by literally pledging to use it whenever possible, whether in written, spoken, or even texted form. Motivated by a sense of fairness—and, I’ll admit, my now loudly growling stomach—I chose that very first word that had spoken to me, PRANDICLE, a noun meaning “a small meal.”

I clicked “adopt.” Cheers and applause erupted as another window popped open to congratulate me. My spirits were buoyed. A warm, benevolent feeling came over me, although I have to say I was struck by the seriousness of my new responsibility. In a gesture of good faith, I promptly ate—are you ready?—a PRANDICLE of steel-cut oats with soymilk. Yes, I was already feeling a very special mother-word bond.

For the uninitiated, a PRANDICLE is not a snack. Nor is it a full-fledged meal. Rather, it’s something in between. A light repast to be enjoyed in the evening following an ample lunch. Or something to be had the morning after an especially indulgent dinner. In other words, it’s just the thing for those times when a big plate of something might put you at risk of becoming CRASSULENT (adj., very fat; overweight; grossly obese), but a mere nibble would leave you feeling ripped off.

Oh, PRANDICLE! There’s a kind of Latinate solemnity and majesty to the gentle rise and fall of your letters. I can imagine Virgil or Catullus partaking of you after having too much peacock or wild boar the night before. But then again, there’s something about the sassy way you work that cute little -ICLE of yours that almost makes me lose control. The way I see it, by bringing you into my life, I’m a lot like one of those heroic souls in Ray Bradbury’s Fahrenheit 451—one of those brilliant resistance fighters who’s committed a banned and incinerated book entirely to memory, cradling it in her mind like a seed that will someday grow to save future generations from famine—except that this whole adopt-a-word thing is a lot less work.

What about all of those other forsaken words waiting at the OED website like saucer-eyed puppies in a shelter? Once given a good home, I’m sure that more than a few of them could be taught to do tricks in exchange for tempting table scraps. Some of them might even prove to be a boon to all of us voracious readers of food writing, our palates so often sadly dulled and numbed from having to digest the same old verbs, nouns, and adjectives again and again. Perhaps readers and writers alike could learn to pause and take time to enjoy the unusual mouthfeel of a word itself. There’s no shortage of endangered candidates up for grabs at the OED. For example…

Ketchup and relish on that dog?

No thanks, I keep my condiments strictly SIN-A-PIS-TIC (adj., consisting of mustard).

Salmon roe with Champagne? Baby, you must be kidding. When it comes to caviar, it’s nothing but the STUR-I-ON-IC (adj., pertaining to the sturgeon) stuff for me.

But enough of this daydreaming. I’m feeling a bit peckish, as I imagine you must be, too.

One final question before we all tuck in to our PRANDICLES. Are there any forgotten—or maybe just underutilized and underused—food words you’d consider rescuing from the obscure darkness of the dictionary pages? If so, at the risk of sounding like one of those late-night TV campaigns for underprivileged children, won’t you please take a moment to caress them with your breath and bring them back into circulation in our comments section below. Then, consider chowing down on any of these tempting PRANDICLES:

Nora Maynard is the cocktails and spirits columnist for Apartment Therapy: The Kitchn, and the presenter of the "Cocktails, Classic Film" series at the Astor Center. She has received several fiction fellowships and is a winner of the Bronx Writers' Center/Bronx Council on the Arts' Chapter One Competition. She is currently at work on a novel (even though the edits were already due, it's still not done yet).