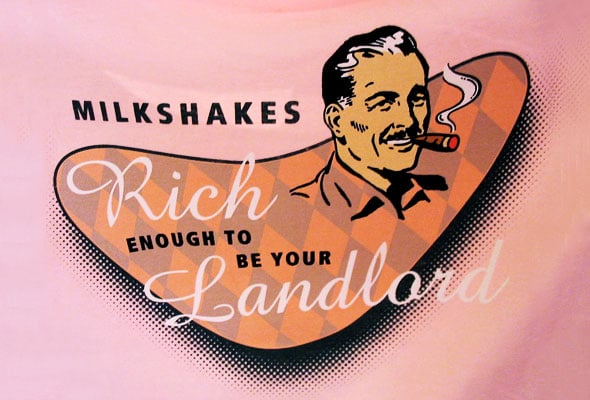 There I was, about to ditch my workaday life in Boston and decamp to Paris for a year of shopping, cooking, eating, and traveling, and what was on my mind?

Milkshakes. (It should have been visas.)

My friends were throwing a farewell party with a menu of stateside treats I might miss while immersed in rillettes, Reblochon, saucisson, fromage de tête, poulet de Bresse, gâteau de l’Opera, vin ordinnaire, and all things good and French. With anticipatory separation anxiety coursing through my veins, three things leapt to mind: iced coffee (heavy on the ice, please), cheese doodles (either puffy or crunchy; I’m not proud of this fact, but I love them), and above all, milkshakes (preferably of the chocolate persuasion).

I’ve sometimes proven to be a bit slow on the uptake. Embarrassing but true. I was no different with milkshakes. I liked them as a kid, of course, although in my imagination I always saw myself slurping them at a classic ice-cream parlor rather than in front of the freezer at home. But there was no proper, old-timey soda fountain in the ‘burbs where I grew up. No Woolworth’s, whose 132nd anniversary is this very day, or Schrafft’s or Bailey’s nearby. No spinning stools, no boomerang-patterned Formica counters, no career waitresses in white-aproned polyester uniforms, and no bendy straws for sipping shakes in unison with your squeeze. In truth, it wasn’t until adulthood, when I learned to make shakes with chocolate sorbet in place of chocolate syrup, that I fell head over heels for them. Off the deep end I went, and I’ve yet to look back.

Fast forward about eight weeks into our year in France. We’re ensconced in our minuscule apartment on the hairy northern edge of the 18th arrondissement, down the back side of the hill from Sacre Coeur. The daily cascade of new experiences in a foreign country, conducted in a language in which my skills roughly matched those of a toddler, had thus far distracted me from pangs for the familiar. I had, however, paid visits to the Parisian ice-cream shops, les glaciers, that I’d researched prior to departing the States. After extensive sampling, there was good news (great ice cream) and bad news (no milkshakes).

I’d thought through this possibility beforehand. Knowing that our kitchen would be too small for the ancient, harvest gold clunker of a blender that had been my milkshake partner for years—I now had a cutting board set across the sink for counter space, and I could literally reach everything in the kitchen without taking a step—I’d brought along a multitasking mini food processor for milkshake-making as well as other, less significant duties.

With ice cream, sorbet (both chocolate, of course), milk, and the food processor, I stood at the dawn of my first milkshake on French soil. It would be a cool, creamy, grounding gulp at the end of a trying day spent attempting, to no avail, to open a French bank account. I plugged in the beast, filled it with ingredients, secured the lid, and hit the GO button.

Crackling, sparks, and a puff of smoke. The processor was motionless. Pas de purée. Ooooohh. Yikes. Pas d’adapteur. In my eagerness, I’d forgotten to bother with an adaptor and had fried the poor, defenseless thing. Mon dieu! With the tiny freezer crammed full, my ice cream and sorbet began to melt right along with my mood.

Luckily, our apartment was directly above an appliance store, so salvation was just a few flights away. I dashed downstairs, balked at the price of a new food processor, and instead bought a cheap, compact immersion blender. Minutes later I was back in the kitchen with an actual French appliance whose proper French plug fit into our typical French outlet without the aid of an adaptor. The ice cream and sorbet were softened but still intact enough for the purpose at hand. Booyah!

Indeed, that was a shake de la shake, and not just because it was smooth and frosty and deeply chocolatey. I loved it even more for its surroundings, which I’d finally gotten right. This dark, petit Paris kitchen was an ocean away from the quaint, iconic soda fountain I’d pictured in my mind as a kid, and about 30 years too late, but it was just where I needed to be.

So tell us, what are your favorite milkshakes? Milkshake flavors, memories, hankerings?

© 2011 Adam Ried. Illustration © 2006 The Rocketeer. All rights reserved. All materials used with permission.