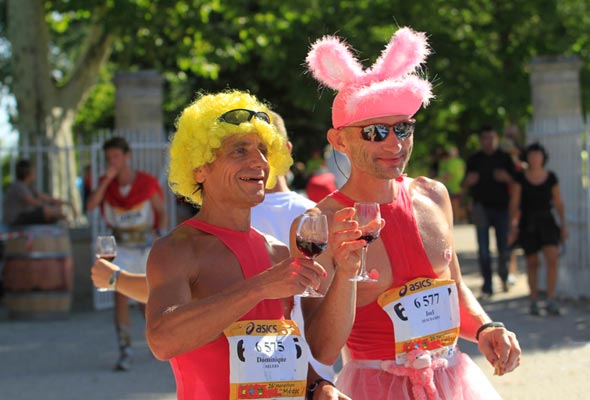 It’s not every day that three sweaty Supermen show up at a wine tasting without drawing even the slightest sideways glance.

Yet there they were, casually swilling and sipping on the grounds of Château Lagrange, the fabled Grand Cru winery in the Médoc region of Bordeaux. The triplet of caped crusaders took in the postcard-perfect setting for a few moments, then plunked down their glasses posthaste and sprinted off, continuing on their rollicking way. On their heels was a jolly swarm of human-sized Smurfs, a small colony of men dressed as bees, and little old me clad in a faux grass skirt, a crown of plastic flowers, and running shoes. Each of us had the same agenda: run, imbibe, repeat.

The bizarre occasion was Le Marathon du Médoc, a spectacle of a sport that wholly encourages costumed nationals—and a small number of us internationals—to plod our way from château to château for petites dégustations, or tastings of their prized vin, while being serenaded by piped-in Mozart concertos. Equal parts pub crawl, costume party, and race, the marathon snakes its way through 53 wineries, among them such name-droppers as Beychevelle and Haut-Bages-Libéral.

I don’t recall how I’d first heard of Le Médoc, as the race is known, but you can see why I signed on the dotted line. To a lush like me, who tagged along with competitive runners, it sounded like reason enough to take up running again. I’d flirted with racing in the past, although never really competitively and always painfully. But given the special circumstances surrounding this race, I figured I’d probably not recall the most grueling parts of the event the morning after.

So I’d traveled clear across the world—my first trip overseas—with the sole intention of standing in this exact place in Bordeaux, just to be a part of this. In recent years, the number of race hopefuls has swelled to tens of thousands, yet only 8,500 runners are granted an all-access backstage pass. For myself and countless others who can’t bring themselves to plunk down anywhere from $300 to five figures for Château Latour or grand dame Château Lafite Rothschild wines, these numbers are like golden tickets. Le Médoc has attracted wine and running enthusiasts from far-flung corners of the globe since its inception in 1985, back when marathons in France were strictly serious affairs. Six Frenchmen—four of them physicians, all of them avid runners—conceived this rather ludicrous concept as an effort to promote running for the heck of it. It worked. According to the race’s official website, “record-seekers are not invited” to this party. Neither are spoilsports and thugs. Those who relish the eccentric—and, of course, wine—are welcome.

As I stood there among the throng of foppishly dressed boozers, a wave of horror—or maybe it was just reality—washed over me. Everywhere I glanced there were toned muscles, pockets bursting with packets of energy gel, and people actually stretching. I looked down at my feet. My virginal Nikes were pristine, a glowing beacon of white announcing to everyone that, yes, I’d slacked off on my training. 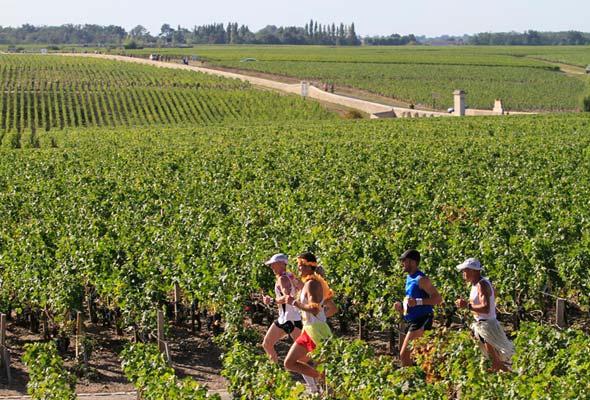 Then the race began. The whoops and cheers of the crowd of runners were replaced by the rhythmic thwap thwap thwap of running shoes hitting the streets. Against my will, my own feet thwapped against asphalt, faster and faster, until my ridiculous grass skirt made that crinkly, swishing, plastic-bag sound that my dog hates. I’d never missed my dog and my couch more than while running those first few kilometers. Gasping for breath, I was a nervous, angry wreck—furious at myself for falling behind my friends, for my burning calves, for coming up with this bright idea in the first place.

Then I reached the first tasting and everything changed. The toned running machines who had left me in their dust were milling about, taking in the glorious sights, sipping the wine, and aimlessly chattering amongst themselves. This was more like an informal cocktail party than a race. I slowed down, looked around at some of the costumes that whizzed by, and sipped some of the best wines I’d ever tried in my life. This was why I had come.

Even better, when I politely asked for a more generous pour, the vintners graciously obliged. Although after inhaling Château Lagrange’s red like I was a sorority girl at my first frat party, I handed my glass back only to hear a trio of angry—and alas, handsome—French men vehemently protest my uncouth American way of pounding that precious pour, cursing me in that beautiful language. I ran away from that particular embarrassment, my pace faster than at any other point that day.

As I huffed and puffed my way along the steep hills and gravel-lined paths that could easily prove perilous for anyone a little tipsy from too many tastings or distracted by the magnificent surroundings, I didn’t see anyone passed out or queasy from all that wine and running. What I did witness were runners in singlets posing as wrestlers, velvet-robed pimps, and even a bride and groom team that breezed past me. Many racers left little to the imagination, wearing nothing more than skivvies, perhaps in the belief that, as with swimming, wearing less is aerodynamically more. Costumes play a critical, if kitschy, role in the festivities, helping to draw nearly 55,000 spectators along the course, some of whom even don disguises of their own. “I felt like I was in a parade,” confided one fellow American racer.

Strolling through vineyards, sipping Grands Crus, and gawking at fellow participants’ costumes can add significant seconds—okay, hours—to your overall finish time. There’s an especially inexorable tendency to ease up after kilometer 37, when tables of water cups are replaced by tables brimming with chilled Champagne, raw oysters, local cheese and charcuterie—even ice cream. There’s a reason why Le Médoc is billed as le marathon le plus long du monde, or the world’s longest marathon.

Of course, crossing the red-carpeted finish line first offers its own incentive, with top finishers awarded their weight in wine. Stragglers who don’t finish before the allotted six and a half hour time limit are scooped up by sweeper vans that putt along the course. My own riffraff band of slowpokes—which seemed to grow exponentially with every pour—managed to outwit a few sweepers by ducking behind grapevines, although I still wonder how the drivers managed to miss my brassy costume peeking out from behind the grapes.

Everyone who crosses Le Médoc’s  finish receives a bottle of vin along with a medal and access to the recovery tent, which hawks beer and duck pâté. Though race officials attempt to cut off the rewards after the 6:30 mark, I noticed that a few lucky stragglers managed to sweet talk their way into receiving prizes. For me, the prize was in the pâté. That first taste, while sprawled out with my friends on a patch of grass along the Gironde river, is something I’ll not soon forget. We were giddy—whether from the runner’s high, the wine buzz, or both. The buzz stays with me even now.

“There are people who say Le Médoc is the only marathon they run,” says race official Jean-Yves Saint-Ceran. Uh, I can understand that. This will be my last marathon, and I don’t feel the slightest bit of guilt in admitting that. I’ve come to understand that I’m just not a runner—although I am definitely a drinker. I’ll go back to Bordeaux, but next time it’ll be without the running shoes.

Registration for this year’s Marathon du Médoc, which takes place the second weekend in September, just began. Slots are doled out on a first-come, first-served basis. Race registration is 75 euros, which is about $103, although you’re on your own for the costume. For more information, including this year’s costume theme, see MarathonDuMedoc.com. Regardless of whether you intend to sign up for Le Médoc, you really ought to catch a glimpse of the chateaux on the course.

© 2011 Cynthia Furey. All rights reserved. All materials used with permission.

Cynthia Furey is a food writer and editor. Her work can be seen in Orange Coast magazine, The Orange County Register and the Zagat guides. You can find her musings and recipes on her blog, Furey & the Feast, named one of Saveur's "Sites We Love."