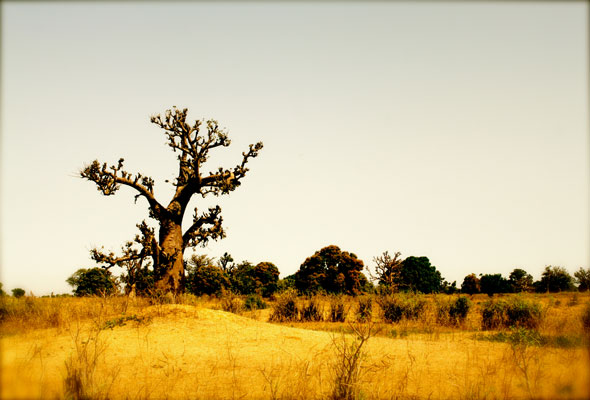 In 1978, fresh out of college, my Aunt Janis signed up for the Peace Corps. She was shipped off to the remote rural village of Maniora, Senegal, West Africa, where she was promptly taken in as part of the village chief’s family, an ersatz daughter to one of four wives, Diallo, who wasn’t able to produce a child of her own.

I’d always liked Aunt Janis. Tall, erudite, and of sunny disposition, she would quietly command everyone’s attention whenever she walked into a room. To me, my father’s younger sister was the embodiment of what it meant to be a free spirit. When she left for Senegal, a place almost impossibly far from the world I knew, it only cemented my admiration.

My world was limited to Schenectady, NY, a city whose heyday had come and gone a century before my time. Home to industrial giants General Electric and the American Locomotive Corporation (Alco) as well as Union College, it had a population that was alternately blue-collar immigrant labor or white-collar academician. The neighborhood my family lived in was homogeneously white.

On occasion, my grandmother and I would call Aunt Janis in West Africa. These were carefully orchestrated conversations, accommodating time differences and untold difficulties in accessing a phone. The process felt arcane, even back then. We would carefully dial what felt like dozens of numbers on our rotary phone, wait for the series of hisses, pops, and crackles, tolerate a foreign drone in incremental bursts, and, finally, thrill to the sound of Janis’s voice, following the two to three second delay that lapsed as our voices traveled along the thousands of miles of wire beneath the Atlantic. It was like calling the moon.

Her visits were far less frequent than the phone calls and were greatly anticipated. With each trip she seemed more radiant, quicker to laugh, easier in her carriage, and she brought fascinating relics back from Africa: Indigo-dyed cloth stamped with cowrie shell patterns; postcards of bare-breasted women with glowing brown skin balancing tremendous baskets on their heads; rustic bowls hewn from richly oiled mahogany; a gauzy dashiki ornately embroidered in silk thread at the neckline that, despite its decidedly un-suburban aesthetic and plunging neckline, I managed to work into my grade-school wardrobe rotation. Everything carried a scent of exoticism, redolent of spice and red earth.

What I remember most, though, is the dinner she cooked for our family during one of those too-short visits. After moving assuredly about the kitchen and brewing an otherworldly aroma from my grandmother’s stove, Aunt Janis gathered us all in a circle, sitting akimbo on my grandmother’s living room floor, which she’d covered with newspaper to protect the sprawling oriental rug. In the center, she set a large bowl filled with cooked grain, a creamy brown stew slathered over the top. By example she instructed us in how to eat it, grabbing a small handful each of stew and grain and undulating her fingertips so as to roll the blob around her palm until it took shape as a small, compact ball. Then she popped it quickly in her mouth. This my aunt did rather deftly; I don’t recall the rest of us being so adept, ending up with sticky hands and gory splotches of stew on the paper-laden floor. Thankfully she’d set out finger bowls of water to restore dignity. My family’s a broad-minded, well-traveled bunch, but this was a challenging technique for all, inciting eruptions of laughter as we continually aspired to improve our stew-balling aptitude, which was, she taught, always done with the right hand, explaining that the left hand was reserved for, shall we say, less savory practices.

I don’t recall her referring to the stew by name. It was both unusual and approachable, just cubes of meat and vegetables stewed in a sauce of peanut butter and tomato paste. My mother’s side of the family is entirely Italian-American, so I was no stranger to the many uses of tomato paste. But peanut butter? It had only made appearances in my life in sandwich form, sidled up alongside sticky-sweet companions like grape jelly, honey, or Fluff. A savory application was utterly new to me. It was complex, unexpected, and very likely the thing that first awakened my now quite adventurous palate. 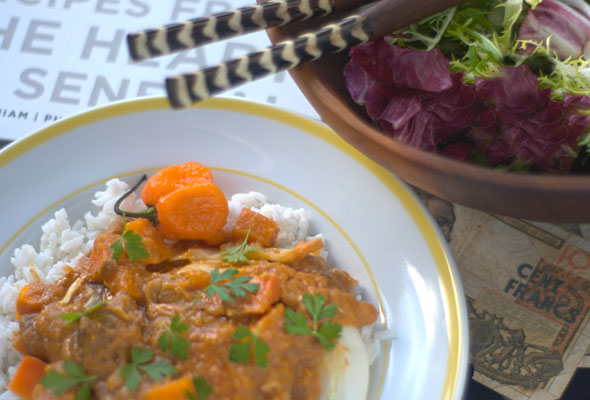 This dish—specifically, the revelation of the slight acidity of the tomato tempering the richness of the peanut butter—haunted me for three decades. Though I didn’t even know what the stew was called, much less how to make it, that didn’t stop me from taking a few blind stabs, arbitrarily mixing portions of tomato paste and peanut butter and slathering them over cubes of stewing meat. This was, invariably and not really surprisingly, to poor effect. It was always too tomato-y, too sticky-thick, or just plain insipid. Even after the Internet came to be and I spent hours searching for what I learned was “mafe,” I had no better luck.

As my aunt’s work had taken her from Senegal to various other countries in Africa, including Burundi and Zimbabwe during their respective coups, I couldn’t exactly pick up the phone and ask Aunt Janis. Still, I good-naturedly harangued her for the recipe in e-mail exchanges, although for some reason not known to me, she always demurred.

And then a few months ago my cousin Allison, Aunt Janis’s daughter, announced her plans to move to my fair city, San Francisco. I leapt at the opportunity, inviting her to crash at our place while she interviewed for jobs, exacting just one thing as payment: her mom’s mafe recipe. Allison had spent only the first couple years of her life in Senegal, but the stew was still part of the family repertoire. Whereas her mother had always made it from memory, Allison had written it down. And now I had her captive. My cousin gamely agreed to make the dish, although she seemed perplexed by my strange fascination with it.

At last! For days I rambled on about this long-awaited dish from around the globe to anyone who’d listen—okay, even those who wouldn’t. Friends humored me as I waxed rhapsodic. I’d even procured the exact ingredient list from my cousin so I could make sure she had everything at her disposal the moment she arrived. In fact, she’d barely set down her bags when I offered to help her prep. I had to head out for a meeting, so I left her to her devices. I was distracted during the meeting, thinking only of the meal that awaited my return home. Ascending the stairs, I could smell peanut butter before opening the front door. Allison was sitting at the kitchen table, engrossed in a phone call, the mafe simmering on the stove. The stew needed an hour or two yet on the stove, plenty of time for Allison’s call to run its course and for my husband to return from work. Finally, the three of us sat down expectantly at the table.

It was…not exactly as I recalled. As indelible as the memories of the Senegalese objects in my mind, I was surprised that I could have remembered the dish so differently. For starters, Allison informed me it was always served with rice, not millet as I had somehow recalled. The stew had a more prominent peanut flavor, lacking the tomato tang I had mentally inserted. It was not unpleasant, merely surprisingly different than the way my mind had played it up in fragmented memories and imaginations over the decades.

When I mentioned this to my aunt a few weeks later, she insisted I take a look at the cookbook Yolele! by Pierre Thiam, a Senegalese chef in New York. I nabbed a copy. There was a recipe for mafe, but he’d made it vegetarian. I melded his recipe with the version my cousin had given me, reintroducing lamb, reinforcing overlapping ingredients and techniques, and reconciling subtle differences such as exactly when to add what. For example, Allison’s recipe calls for adding the tomato paste after the peanut butter, and Thiam’s before. I ultimately preferred adding the paste first, letting it cook down a bit to intensify the flavor before smothering it in peanuts.

After a half dozen or so attempts, I managed to approximate the exotic mafe stew that had captured my fancy thirty-odd years ago. Every time I taste it, I’m transported back to my grandmother’s living room, sitting around that great bowl eating with our hands. I can feel the sticky sauce on my hands, feel my jaw ache as I accidentally cram too large a ball of stew into my mouth. However, I no longer sport a dashiki over my shirt when I sit down to mafe. I don’t need to. I now prefer to enjoy it with a spoon.

© 2011 Sean Timberlake. All rights reserved. All materials used with permission.

Sean Timberlake is a professional writer, amateur foodie, avid traveler and all-around bon vivant. He is the founder of Punk Domestics, a content and community site for DIY food enthusiasts, and has penned the blog Hedonia since 2006. He lives in San Francisco with his husband, DPaul Brown, and their hyperactive terrier, Reese. 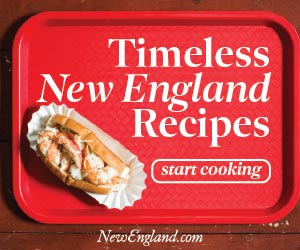