These artichoke hearts stuffed with saffron crab are topped with bread crumbs and baked until golden. A great recipe for parties or hors d’oeuvres.

These artichokes topped with creamy, golden, saffron-scented crabmeat make an elegant special-occasion starter. Choose large artichokes, because you’ll be trimming away all of the leaves and choke and using only the meaty base, or “crown.”

Saffron is the world’s most expensive spice because it takes more than 4,300 crocus blossoms to produce enough (handpicked) stigmas to make a single ounce. It’s worth the expense, though; it only takes a pinch to add a beautiful golden hue and subtle but distinctive flavor to foods.–Tina Salter 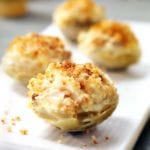 Choose large artichokes, because you'll be trimming away all of the leaves and choke and using only the meaty base, or "crown."
Tina Salter
Prep 30 mins
Cook 30 mins
Total 1 hr
Appetizers
American
6 servings
327 kcal
5 / 2 votes
Print Recipe 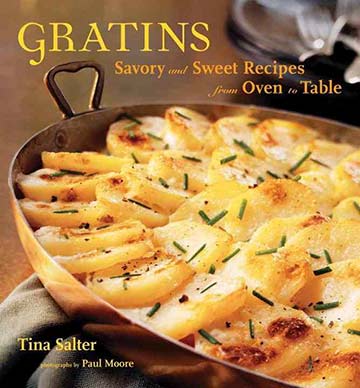 To trim artichokes, working with one artichoke at a time, cut off the stalk flush with the base of the artichoke, then remove the outermost leaves to reveal the sides of the pale, cream-colored heart. Cut off the top about an inch above the base. As each artichoke is trimmed, rub the cut surfaces with lemon to prevent discoloring, or drop them into a bowl of cold water with the juice of 1 lemon.

I served this to a group of women from college on our yearly weekend. They all swooned. It’s rich, intriguing, and a bit exotic. The flavors are subtle and the texture divine.

The star of these artichoke hearts stuffed with saffron crab is the saffron-scented crab. It’s easy to overwhelm the subtle taste of crab, but this recipe doesn’t do it. The creamy saffron sauce beautifully accentuates the fresh shellfish.