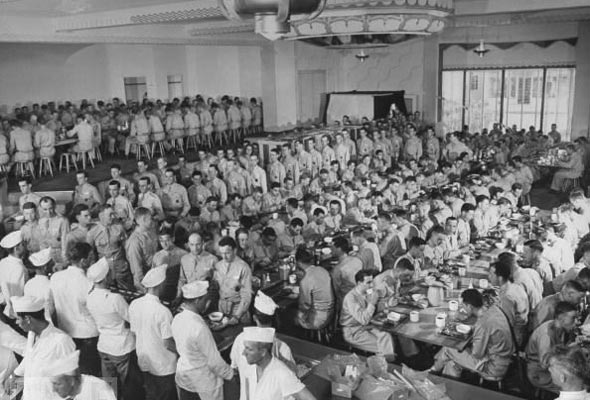 My boyfriend, The Medic, possesses an utter lack of taste. I attribute this to his years of smoking and consuming what passes for food in the military. But mostly, I blame the military.

As an army combat medic, he has spent the past ten years eating slop, swill, grub, chow, and just about anything else the military deems edible. Accustomed to packaged, dehydrated, and often dull-tasting MREs (Meal, Ready to Eat), he has no compunctions about regularly consuming food that must be chemically rehydrated. What most civilians find indiscernible in appearance and taste, he considers dinner.

He brought some MREs back for me from his recent training, thinking that I’d find them fascinating, if a bit strange. There was chicken that must be boiled in a packet with lukewarm water and an exothermic chemical powder. Minestrone that’s designed to survive a nuclear holocaust—and looks as though it already did. And a slice of pound cake that weighs (literally) more than a pound.

But it was the brownie, or a dastardly excuse for one, that upset me the most. I peeled it from its cellophane wrapper and let it drop onto the table with an unnerving thud. After some hesitation, I took a bite. It was dense, bland, and had a strange, almost muddy texture, coating my mouth in a chemical-rich cocoa film. It was unpalatable. A sin against pastry.

I was shocked that this was what the military was feeding our troops overseas. Wasn’t the current administration against cruel and unusual punishment?

The Medic leapt to the government’s defense, explaining that MREs aren’t exactly made with taste in mind. They’re designed instead for durability and nutrition. Enriched with vitamins and packed with chemicals, they’re not flavor, but fuel. Soldiers should be able to drop a bomb on MREs and find them still edible after they clear away the rubble or stumble upon a still viable stash that’s been sitting in the desert for months. Make that years.

Real brownies are lucky to live through the night in our home. As I see it, the more chocolate and fat a brownie is fortified with, the better it is for me. When The Medic received orders to ship out for 12 months, I began mulling over my care package options. In light of the MRE situation, I realized I needed something that not only tasted swell but had the longevity and fortitude of an Old Testament character. Something that would remind him of me—and my awesome baking skills.

What I needed was my own civilian rendition of MRE brownies that tasted better than any regulation military recipe and was similarly indestructible. With a little research, I found the military’s brownie “formula,” an epic document that had been circulated online—and widely criticized for its length and confounding instructions. Out of culinary-masochistic curiosity, I downloaded all 26 pages. I was determined to decipher the formula.

The first task before baking was translating. The recipe was a lot like an online dating profile—simultaneously specific and vague. Rather than issuing an ingredient list and method, the formula was essentially a manual of military regulations that range from the U.S. Standard for Grades of Shelled Walnuts to the polyethelyne film thickness of the wrappers as specified in section L-P-378. Here’s the regulation for eggs:

This goes on for 200 more words. For god’s sake, they’re eggs. It should read: Eggs, whole, fresh. From a chicken.

And don’t even get me started on each brownie’s requisite weight, size, and related particulars (see section 3.4f of the formula for full details).

Conversely, some aspects of the formula were bafflingly vague. Despite the recipe being as long as the war in Iraq (didn’t Bush say it was over in 2003?), the instructions were seriously lacking in certain details. (I think this says something about military planning.) For example, the recipe measurements were by weight, although they didn’t specify ounces or grams. (Turns out it’s ounces.)

Then there’s a ridiculous list of chemicals. While I could easily acquire anhydrous dextrose, an ingredient often used to help preserve sausages and other forms of charcuterie, from a butcher friend of mine, I wouldn’t be able to make the chocolate frosting without raiding a university chemical storage facility. Either that, or I could order compounds such as polyoxyethylene (20) sorbitan monostearate and thiamine mononitrate, although I was worried I’d land myself on a government watch list. My makeshift military brownies would have to be naked, frosting-wise.

With each maddeningly vague step, following the formula reminded me more and more of preparing my taxes. Yes, the forms tell you what to do, but they make no sense whatsoever and they require an enormous amount of guesswork and judgment calls. I “organoleptically examined” the ingredients, which means I checked to see if they looked and smelled right. (The anhydrous dextrose looked and smelled like baking powder, so yeah, I guessed it was okay to use.) The formula also said to add “trace amounts of flavoring.” I interpreted this as “a teaspoon of vanilla.”

By the end of mixing, I had a bowlful of what resembled brownie batter. It was thick and brown and kinda-sorta smelled like chocolate. A small lick revealed that it tasted like the smell of a just-opened cardboard box filled with packing peanuts. Only, you know, slightly sugary and chocolaty. Into the oven it went to bake at the requisite 350 degrees for 35 to 45 minutes.

As I’d anticipated, the brownies were barely mediocre. The chocolate flavor was minimal at best, and the relatively large amount of dextrose gave them an unpleasant Styrofoam-like texture, not to mention aroma. They were, however, recognizable as brownies, albeit with an oddly impressive physical structure that was hardy without being hard. They were definitely durable, a difficult feat in the pastry arts. You’ve got to be proud of military culinary scientists for that.

I left the rest of the batch on the counter, uncovered, for a week. On day seven, the brownies actually tasted a bit better than before, having absorbed some moisture from the air. In that regard, the formula was a success, although the fact that the brownies tasted just as fresh–if not fresher–a week after they were made was both a compliment and an insult.

What surprised me most was that I could almost sort of understand how, if you were in the middle of combat operations and months from home and craved something sweet, these might do the trick. Better than nothing.

Still, from a purely flavor-focused point of view, there was clearly room for improvement.

Thus began more research. Baked goods intended for military care packages bound for overseas travel have to follow certain rules. (The Medic was only being deployed to Texas. While this wasn’t the other side of the planet, it seemed it. So I baked accordingly.) Anything with a high moisture content can potentially lead to mold. This includes honey, molasses, and brown sugar, as well as minimally processed, naturally fatty foods such as butter, nuts, and peanut butter. And while chunks of chocolate are fine, melted chocolate is not. Since spoiled ingredients lead to sick soldiers, I relied on oil for fat, processed white sugar for sweetness, and eggs as my main stabilizer. I figured a heavy hand with cocoa powder and chopped chocolate could overcome the lack of butter or melted chocolate. And in place of nuts, I chose relatively exorbitant cocoa nibs for bitterness, crunch, and bit of decadence. (He’s worth it.)

It took a few tries. The first batch turned to dust from the slightest touch as if it was a centuries-old book. The second had a decent crumb, but it had too much oil, which left me feeling queasy from its greasiness. Eventually I turned out what I consider to be epic care-package brownies—dense, with an intense chocolate flavor. Even better, they had a sturdy crumb that didn’t crumble. These brownie weren’t just tasty; they were tough as soldiers.

To test for longevity, I left them out on the counter unwrapped for a few days. By day five, they suffered only slightly from a tinge of staleness. Otherwise, they were still just dandy. They may not be able to withstand mortar fire or sit in the barracks for months at a time, but at the very least, they’d make it to the base unscathed. And chances are they’d be demolished so quickly they wouldn’t need to last much longer.

Or so I told myself. Feeling pretty confident that my military care package brownies would make any military person swoon, I rounded up a few good men and women in uniform for a tasting. Sure enough, the brownies were a resounding success. Not only did my testers think my version tasted way better than standard-issue MRE brownies (OK, to be honest, that wasn’t exactly difficult), they really appreciated the fact that these baked goods could withstand some abuse. They told me heart-rending stories about care packages that contained wads of plastic wrap and foil filled only with dried-out crumbs or foul-smelling cakes. Perhaps I ought to e-mail a copy of my recipe to their loved ones.

And the real test? Even The Medic agreed that  these were better than a standard-issue MRE brownies. It seems there’s hope for him yet as an arbiter of taste. Now I just have to work on those damn cigarettes.

© 2011 Garrett McCord. All rights reserved. All materials used with permission.

Garrett McCord is a freelance food writer, writing teacher, and recipe developer. He's written for Gourmet Live, The Huffington Post, Epicurious, Cheese Connoisseur, and many other online and print publications. You can find him at his popular food blog, Vanilla Garlic. His first cookbook, Melt: The Art of Macaroni and Cheese, will be published in October 2013. He lives in Sacramento, CA, with his husband, Brian, their two needy cats, and a Corgi named Jack.